When we last left our heroes, they had found new identities, killed Uncle Enrique (or rather Cameron did), and were being stalked by both the newly revitalized T-800 AND a mysterious figure who appeared to be from the resistance.

The episode starts with another dream sequence (hooo boy) but at least it's readily apparent this time that it's a dream sequence.  Sarah is surrounded by a room full of scientists who apparently built the bomb, and she's mulling over if she has the cold-blooded killer in her to gun them all down.  Turns out she does as she shoots them all dead, but they rise up and morph into T-800s.  She empties a few clips into them before they all raise their weapons and...

*GASP*   Sarah awakens.  Shoot man, we're going to have to make a drinking game out of this soon.

Meanwhile,  John is getting settled in to his new school with Cameron posing as his "sister".  That's totally going to be awkward when the janitor catches them in the closet going at it like jackrabbits.  Anyway, their first obstacle turns out to be the school's metal detector (I'm pretty sure they Quantum Leaped past Columbine), but a quick save gets them in when John tells the security guard "she has a metal plate in her head".  Gee, great, a 'how-to' for terrorist everywhere. 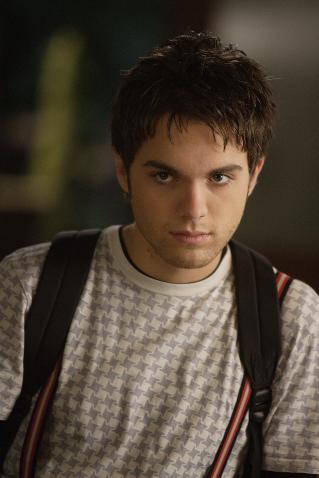 Things quickly get weird as a girl in school is being tormented by...someone...who is painting stuff on school doorways.  Every time she sees one, she freaks out.  Cameron makes her way to the rest room (must be an oil leak) and soon gets to do the whole "Terminator who doesn't understand the hip jargon" thing as the girls in there tell her their makeup is 'tight'.  Great, too much more of this and we're going to start getting "Small Wonder" vibes, and that can only end in tears.

They do some "Whatchoo lookin' at?" posturing, but Cameron does it better and the girls scurry out.  Of course, the tormented girl is crying in the stall, and Cameron tries to make friends with her (by offering her the "tight" makeup as a gift).  Sadly, this doesn't work all that well, but we get some clues that there's some dark secret with this gal as she runs out of the bathroom.

Turns out "dark secret" is right as later on students rush outside yelling "jumper on the roof!" and yep, it's the girl.  John wants to do something but Cameron grabs him and re-iterates what John had told her--"Don't be a freak."  Seconds later, the girl leaps to her death as John is very upset Cameron wouldn't let him help her.  Great, this guy can't even save a random chick, and we're hoping for him to save the human race?

During this time, Sarah continues her quest to find out more about whoever could now be the potential creator of Skynet.  She finds Dyson's widow at his gravesite and shoves some photos in her face of potential suspect (classy~!)  She's hesitant at first, but she does ID one of them as an intern that worked for her husband ten years ago.  Man, that's a hell of a memory...I can't remember the names of co-ops that worked at our company last month, much less 10 years ago.

During their date, Sarah finds out that Andy has been working on an AI for a chess program...that is capable of defeating any human in existence.  Great, the human race is going to die because they fell into "Fool's Mate".  Andy even has a creepy poster showing man versus machine engaged in a game of chess...and the machine's hand looks just like a T-800's.  SUSPENSE~!  Their moment is interrupted by movement outside.  At first it's not clear if it's Cromartie or the renegade freedom fighter, but the shadowy arm showing its barcode lets us know what's what.  Sarah is clearly spooked and makes her way out posthaste as Andy calls the cops and tries to beg her to stay--"C'mon, the burglar can watch!  It will be TOTALLY hot!"

While all of THIS is happening, Cromartie the skinless Terminator is on a mission of some sorts, gathering up bags and bags of blood.  Some hospital personnel try to stop him, but that goes about as well as you'd expect.  Soon he arrives at the home of an unnamed scientist and quickly puts him in a big-ass chokehold.  Luckily for the scientist, during the commercial break Cromartie comes to his senses and writes a very complex equation of some kind on the wall.  "MAKE ME THIS THING" or words to that effect is the idea, and the doomed-scientist guy is fascinated with what he sees in the equations and agrees to help.  Turns out he's going to need a lot of blood--conveneintly, Cromartie bought a cooler full.

Back at the Connor ranch, they talk strategy as Sarah tells of what she found out about Andy.  Both John and Cameron are pretty nonchalant with their opinion of the guy--ice him, whack him, kill him, whatever the l33t talk is for the kids these days.   Sarah seems to have her doubts. 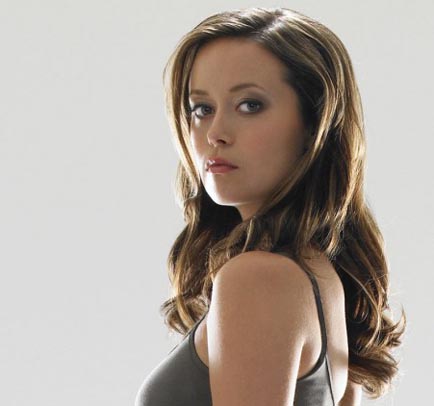 "You should totally kill this Andy guy.  It will be 'tight'."

Going on during all of THIS has been the dogmatic agent who had formerly been hot on Sarah's trail.  He had been investigating Enrique's death earlier in the episode but couldn't overcome his nephew's smarminess to get very far in his questioning.  (Thankfully, his silent sassy girlfriend is still hanging about, practicing her silent sassiness.)  He shows up at a new crime scene towards the end of the episode...and it's our doomed scientist, who has been just SLAUGHTERED and as a kicker had his blood wiped all over the "Terminator Secret Skin Sauce" equation that was written on the wall.  The worst part is that the killer took his eyes...hmmm, wonder what someone would use those for?

We quickly intercut to Andy returning home to see his home in flames, with Sarah hiding in the bushes nearby.  He's devastated as he'd been working on his Chess AI for years and now he's watching it go up in flames.  Apparently, Sarah's going to give this merciful thing a shot before she pulls the 187 on this honk mofo.  Trust me, it will be tight.

Lastly, we get a "flashback" to what happened to our doomed scientist friend...it shows the bathtub full of the blood solution, and Cromartie arises from the liquid with some new skin.  Seems as though his eyelids are glued shut, so the doomed scientist helps him by slitting them open with his scalpel.  Cromartie's familiar red eyes beam from underneath the flesh...and we cut to credits.

What did I think?  This episode was certainly not nearly as exciting as the first two, but it is promising that it's not going to be "new T-800 to kill" every week.  The pacing here was slow and admittedly boring in spots but I'm willing to give them a little time to try and set up whatever it is they're working towards.

John spending so much time at school really bugs me.  As paranoid as Sarah is, I can't believe she'd just turn her son loose at school (even with Cameron as an escort) when they know that other Terminators are out there...somewhere.  This whole "drama at school" thing was pretty unwelcome too, and since they didn't explain what the girl was so upset about you know they're going to revisit that plotline as well.

Sarah dating...I hope that this was all just to get close and find out more about Andy.  I mean, unless your name is Kyle Reese (and he's dead), Sarah's not the dating type.  Sure, she was living with that guy in the first episode, but that was "life on the lam" type stuff.  I'm not hopeful about the fact she chose not to kill Andy, and I hope that's not an indication that she has feelings for him somehow.

A combination of fairly good and generally bad, but let's hope for less school-time adventures and more run and gunnin' in future eps.