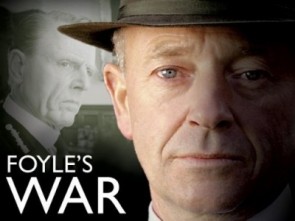 There are few car chases. There are no gun fights where hundreds of rounds are fired but nobody is hurt. There isn't a different femme fetale crossing the screen every week attempting to lure our hero off the path of virtue. In short, this is a British show where the pacing is a bit slower than you might be used to. The stories told in this series take their time and build slowly. It's a show to be watched with a cup of tea not a can of Red Bull. Each season, which is only 4 episodes long but each the length of a feature film, we follow the life of Detective Chief Superintendent Foyle as he solves crimes in the south of England during World War 2.  He is joined by Sergeant Milner, a man wounded in Norway, and his driver Samantha "Sam" Stewart. The stories are well written and even have you guessing as to who the true culprit is which is almost unheard of in today's police dramas.  What I find especially great in this show, outside of the top notch acting, is the way in which the war is presented from the perspective of the home front. It isn't infantry assaults and artillery barrages. It's more subtle in the way it twists the morality of those not on the front lines. I also like that things that are largely forgotten by most people, in America anyway, are given the type of importance civilians at the time actually gave them. Who in America remembers the botched British invasion of Norway? Who remembers that a German invasion of England was viewed as almost a certainty as was the eventual defeat of Britain? This show makes me glad of Netflix which fills it's roster with programs you might not have ever heard of otherwise and in this case it's a great one.