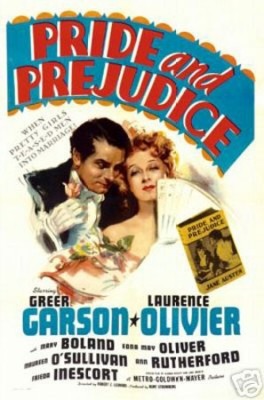 I hate Jane Austin. I hate her maudlin melodramatic crap. I hate her stories of women whose sole ambition is to marry a rich douche bag. I hate tales of the English class system. The tribulations caused to wealthy jerk-offs by the improper use of a piece of flatware bore me to tears. So when I clicked on Turner Classic Movies this morning and the movie was the 1940 version of Austin's Pride and Prejudice I said "Fuck this." and had every intention of turning the channel to something far more exciting like the Indian Head Test Pattern. Five minutes later I was still watching it. That arrogant jerk Mr. Darcy was saying some very unkind things about Miss Elizabeth at the ball. "To hell with this," I said as I picked up the remote. The latest Slap Chop infomercial had to have more action than this movie. After forty five minutes  Mr. Darcy, Mr Bingley, and his bitch sister had moved back to London without even so much as a good bye and broke poor Jane's heart. "Those rotten bastards." said I intending to put on reruns of Full House. An hour and a half in and Lydia had run off with the dastardly Mr. Wickham and brought shame on the entire Bennet clan! Can you imagine? After two hours I was drying a tear from my eye as Miss Elizabeth and Mr Darcy were to be married! The point here is this movie drew me in in spite of myself. The sets are luxurious. The actors and actresses are all legends. And I dare you to watch this and not be in love with Greer Garson by the end. I double dog dare you.