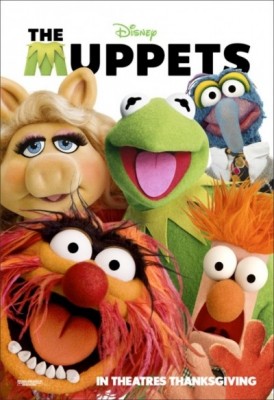 Jim Henson was a  genius. Plain and simple. A man who put his stamp on the soul of every person of my generation. First with his work on Sesame Street and then with the Muppet Show and later with The Muppet Movie. His humor, charm, and sensibilities are impossible to replicate but that does not keep the producers of The Muppets from trying. All the ingredients are there. We have our favorites from Kermit to Miss Piggy to Sam Eagle. We have the song and dance numbers. We have the celebrity appearances. We have the cornball humor, puns, and asides to the audience. On paper it should work but it just doesn't. It's like watching a band from the 70's that were once great but now only have one member left of the original line up and he was the bassist. Same songs, same name, but it's not the same thing. Without Jim Henson the muppets are just another tired cover band. The original music could have been lifted straight from the Disney Channel's prime time line up and by that I mean they kinda suck in an inoffensive way. Not to say it's all bad and little kids will certainly like it. I especially liked the Manamana song over the end credits.

Netflix Status: DVD only. Is available on Starz On Demand