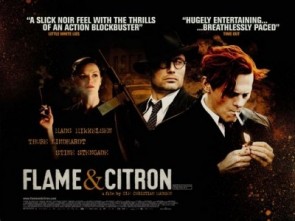 War is a destroyer; a destroyer of people, of places, of judgement, and of beliefs. In Flame and Citron we follow the lives of two members of the Danish resistance in World War Two. We watch as these men who began their careers with high ideals and a belief in their cause become worn down not only by the killings they engage in but also by the loss of those ideals as it slowly dawns on them that nothing is pure and nobody is to be trusted and everything is rotten. The movie is "based on actual events" which means little other than there were two resistance fighters code named Flame and Citron. The film is well produced and never once for a minute is the illusion of being in occupied Denmark broken but it is bleak. An exercise in hero deconstruction, of nihilism, and of moral relativism. It achieves its aims admirably and It is not a bad film but I do not subscribe to those philosophies and so I cannot honestly say that I enjoyed it.