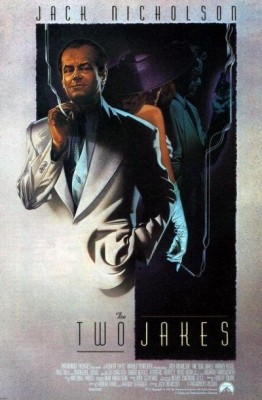 You mix a flawed or emotionally wounded protagonist, a femme fetale, some whiskey taken straight and a mystery and you've got yourself a Film Noir, right? The Two Jakes has all the components even going the extra mile to include the required American made convertible that is issued to all graduates of The Hard Boiled School of Detection. It comes very close to being a great example of the genre but it is missing something. Perhaps it's as fundamental as the plot. Film Noir and mystery stories in general should have a plot you need to pay attention to. It should have twists and turns and "hey wait a minute" moments but most importantly when the mystery is revealed it should be satisfying and it should make sense. It should make you feel all the trouble and bull shit our suffering hero went through to find out the answer was worth it. In this movie I got to the end and thought "That's it?" It was a ten minute mystery stretched over 2 and 1/2 hours. That extra hour of film is the other major flaw. It was long and it felt long. The one thing it really nailed was the look and feel of post war L.A. right on the verge of exploding into the modern day metropolis of our time. Vilmos Zsigmond was the cinematographer. Jerry Wunderlich did the set design and he and his team deserve an oscar for their work here. I can only imagine the effort it took to find so much art deco.

Netlix Status: The Two Jakes is a sequel to Chinatown. Both of these are currently streaming on Netflix.