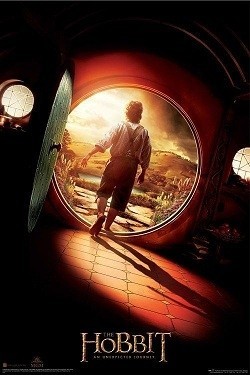 For one, like myself, who is overly familiar with the story of The Hobbit, it is difficult to break the bond with the story as written and take the movie interpretation on it's own merits. However, this is a thing you must do, If you don't it could ruin your enjoyment of this movie and that would be tragic because it is spectacular. From a purely visual perspective, every frame is a delight. From the intial scenes of the kingdom of Erebor to the scenes of Rivendell to the escape from Goblin Town to the flight of the eagles. They are all are mind blowing. Martin Freeman totally nails it in his performance of Bilbo. Some of the dwarves don't get enough screen time to make an impression but those that do, namely Thorin and Balin, are well done.  I loved how I felt the menace of Gollum in The Hobbit which is something that was never really achieved in The Lord of the Rings. There are many sequences that take a sentence or two in the book and elaborate upon them until they take up whole segments of the movie. The sequences featuring Radigast are the most note worthy. They may be done with creative liscense but they are done with a quality and tone in line with the rest of the film which is to say they are very well done indeed. This movie is destined to be a classic but don't cheat yourself. Go see it in the theater if only to reward your eyeballs for having to look at so much ordinary stuff the rest of the time.

Technical note if you are wondering, I saw it with the standard frame rate in 3D