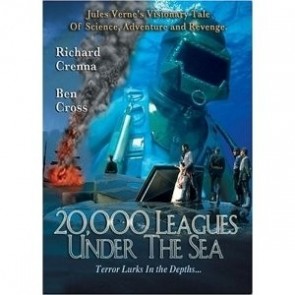 We all know the titles of Jules Verne's famous works; Journey to the Center of the Earth, Around the World in 80 Days, Dick Sand a Captain at Fifteen. Okay, you probably haven't heard of that last one but you certainly know 20,000 Leagues Under the Sea. I would bet, though, that I'm not alone in never having read one, 20,000 Leagues included and yet I know the basic story line. Crazy captain has a sub that gets eaten by an octopus. This made for TV version of the story does have the captain and a sub devouring sea monster but it focuses more on the love triangle between Nemo, the daughter of a scientist, and a harpooner even though the motivations and character of Nemo are far more intriguing. This movie isn't going to win any awards. The female lead, Julie Cox who you may remember for her role as the Empress in The Never Ending Story III, is as wooden as a cigar store Indian. The actors playing the professor and Nemo turn in passable performances. The special effects are cheap and I get a laugh every time they show a view out a porthole the ship appears to be grounded on a coral reef. The sub also suffers from "Tardis Syndrome" in that exterior shots make it look no bigger than a normal ship but it would have to be the size of a modern day aircraft carrier to accomodate the vast interior. The director, Michael Anderson, is a veteran of pulp and sci-fi stories. He did Around the World in 80 Days and my beloved Logan's Run. He did this near the end of his career and  perhaps it is his fading touch that keeps this from being utter dreck. As it is, it is merely worth a shrug and quickly forgotten.

Now available on Starz on Demand