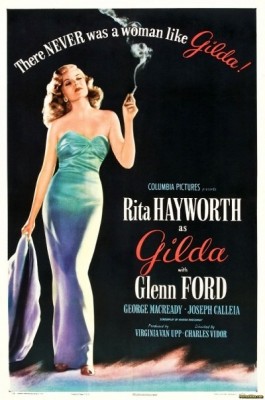 "It's a thin line between love and hate." So sang The Persuaders and they were never so right. Sometimes there is an attraction so powerful between two people that it can burn. Like a fire it becomes a destroyer. In Gilda the love/hate story between Gilda and Johnny enters a death spiral of mutual antagonism, despair, and longing. It isn't pretty, it isn't fun, but it's hard to look away. There are some great performances but the show is totally stolen by Rita Hayworth. She is beautiful, no doubt, but more than that she is sexy. So palpable is her primal  appeal that you'll know just why the men in the movie feel the way they do. The quiet menace of the casino owner is ratcheted up slowly and with great tension. He's played by George Macready whose one of a kind voice is a delight to listen to even when he's saying horrible things. I really like quiet  well spoken antagonists. They just seem more competent and fearful. However, the last five minutes of the movie are a let down. An obligatory "happy ending" seems tacked on. As always, that's a let down. And Fellahs, when your wife asks if Gilda is the kind of women you really like, you best say "No" but we both know what you'll really be thinking.