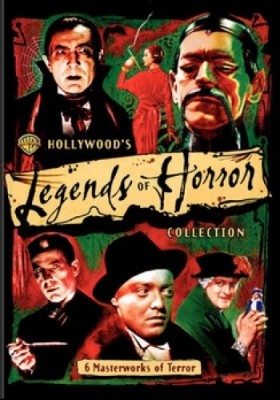 Hollywood's Legends of Horror Collection is a set of six horror movies released from 1932 to 1936. Seeing as this is allegedly a five second review, that leaves me less than one second apiece for each. Time! We are wasting valuable time. Come on, let's go!

Doctor X released in 1932 with a bunch of people you never heard of except for Fay Wray who plays the doctor's daughter. Some flashes of brilliance with set design and tone.The original premise is really cool and individual scenes really deliver but in the end it falls apart and left me disappointed.

The Return of Doctor X released in 1939 which has nothing really in common with Dr. X other than it's mad scientists run amok. Humphrey Bogart is in but does not star in this movie. Superior to the original in every way and overall entertaining.

Mad Love from 1935 and starring Peter Lorre as the creepiest stalker you've never met. And be glad because he is CREEPY. He is super great in this. The scene where he masquerades as an executed killer that has had his head reattached is worth the price of admission alone.

The Devil-Doll circa 1936 and starring Lionel Barrymore. More mad scientists causing trouble. A cool revenge flick and Lionel Barrymore is....Lionel Barrymore, awesome even as a cross dressing mad man. The special effects are pretty impressive for their time. Holds up right until the coda where we find our cold blooded killer to really be a daddy in search of his daughters love. LAME!

Mark of the Vampire from 1935. A horrible mess of a movie. Some visuals are quite good but the story. Holy fish! What a muddled mess and the ending! What the hell! What a let down. Lionel Barrymore is in this too as the "Van Helsing" character but even he can't save this movie from itself.

The Mask of Fu Manchu released in 1932 and starring Boris Karloff and Myrna Loy. Far and away the best movie of the bunch. Classic matinee pulp adventure. This collection has the uncut version with all the "offensive" racial and sexual material left in. So Good! Nothing really "horror" about it but this movie makes the collection.