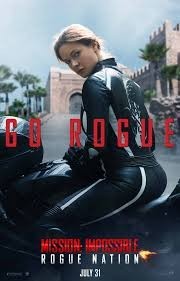 Super entertaining flick. Tom Cruise doing what he does best, action hero with just enough depth to keep it interesting.

Finally we get a really good car chase scene as well. When was the last time we had one of those? Ronin? The Bourne films?

The only takeaway is that the original Mission Impossible show had all team members contributing equally so that it all came together perfectly each time. This film is very much an Ethan Hunt show with small supporting contributions from other members. I think it would be better if it were more like Ocean's Eleven with lots of moving parts. Also, the original series had flawless execution by the characters. In this movie, the MIF members make mistakes and goof quite often. Is it because modern audiences don't like being talked down to? They prefer fallible characters in order to identify with them more? I'll have to give this a think-over.

Alec Baldwin is good fun as the CIA head and modern-day bureaucrat. The female lead, Rebecca Ferguson, steals every scene she's in. It's almost like they wanted Scarlett Johansson in that role as a Black Widow-type character.

I'm not sure why the screenwriters thought adding a couple scenes of a congressional oversight committee would be fun. And the well-documented escapades of Tom Cruise doing or not doing his own stunts is starting to help take viewers out of the action scenes a bit when they are happening. The opening sequence, my stepfather and I just kept discussing if he really did this or not. That's not supposed to happen while watching a film.

Lots of good laughs and fun sequences. The last two Mission Impossible entries have both been fantastic. Look forward to more.

Brain rating: 3.5 stars (it gets a little predictable when anybody can be anybody, not a spoiler)