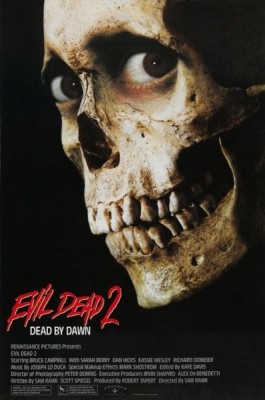 If I'm going to watch just one movie in the Evil Dead series, I typically reach for the original.  It's a movie I admire to no end.  It makes no illusions to try and convince you that there's much of plot or that any of its characters are developed, it's simply out to drench each of its participants in an outrageous amount of blood.  The final sequence is an utterly brilliant combination of camerawork and sound, made all the more impressive given how little of a budget it had and the meager means in which it was achieved.  It's such a pure experience, and despite never making a horror film myself, no one movie inspired me more when I was in my film student days.

Yet I've always thought that Evil Dead 2 was the better movie.  After all, it's more in line with what we all enjoy about both Bruce Campbell and Sam Raimi.  Sam's love for The Three Stooges and his willingness to put that slapstick humor in places it usually wouldn't belong is at the forefront here, and of course you've got Bruce doing what Bruce does best.  You can quite literally watch the transition to the actor we all know and love as the film goes on, and I don't just credit that to the inclusion of his so-bad-they're-good one-liners (which is more of an Army of Darkness thing anyways).  I really do think he comes into his own here.

It had been a few years since I last watched Evil Dead 2, and what really stuck me this time around was something I had somehow missed the dozens of times I'd seen it before.  That crazed, frenetic energy that you only see at the end of the first movie is present all throughout in the sequel.  It's not just the black humor, it's the camera techniques, angles, editing and sound as well as the inventive situations that always make you want to scream just as much as they make you want to laugh.  It really does come across as the work of a complete madman.  My favorite scene is where the entire cabin starts laughing at Ash.  It descends into a "if you can't beat 'em" moment, and Campbell plays it perfectly.  It's just so surreal, it sort of perfectly encapsulates what makes this movie so great, and because Raimi's at the top of game here, you feel about as ready to "join 'em" as Ash is.

SCARE RATING:  2/5 (could be more depending on how squeamish you are)

jeb replied the topic: #212903 20 Oct 2015 14:25
I love this movie. It's funny, horrifying, gross camp. It's the movie Raimi wanted to make, but with a budget. I love that characters are smart--the crazy shit starts and it jump cuts to Ash driving away at 100 mph. The camerawork is inspired--POV-demon that gets lost? Dutch angles everywhere? God, it's a romp.

I took the wife to it a few years back when it was in town and it was a great time.

Michael Barnes replied the topic: #212912 20 Oct 2015 15:14
It's definitely a great one. But it's also one I've kind of worn out...there was a period in the late 80s/early 90s when I watched this movie non-stop on a ragged out VHS tape. I think I'd actually be alright with never seeing it again. But I do love it, and it is great for all the reasons Josh listed. It's such a well made, spirited film that it's hard to not enjoy it. For its time, it was really something else.

It is better than the first one, but it's also more or less a do-over. Raimi was much more assured, more confident with what he wanted to do and it shows.

That bit Jeb mentioned is my favorite- the driving off. Perfect!

I saw a screening of it sometime around '92 or '93 at Georgia State University...it was a Halloween thing, double billed with Re-Animator. Let me tell you, seeing ED2 in a theater full of people who have seen it 100 times is an entirely different experience.
Read More...