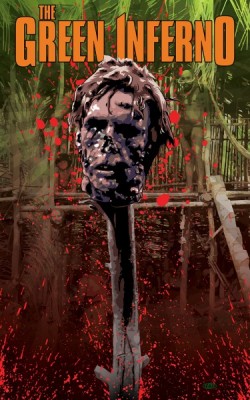 Well that was pretty bad. The trailers and especially the banned red band trailer had scared me so much that I had no choice but to see this movie and get it over with. My imagination was worsening the images and situation so much that I was having trouble falling asleep. So I had to confront these demons and see the movie, and I'm glad I did since the overall execution of everything was really lacking and wasn't nearly as scary as I imagined it would be.

For those that don't know, this is Eli Roth's homage to the infamous Cannibal Holocaust movie decades ago. It's Roth doing what he does best (or worst), combining torture pr0n with even more horrifying acting. I mean, the male leading activist alone... if I'm going to have nightmares, it will be from his performance. Somone should feed that guy to cannibals for real.

What the movie does do well is mess with your head in the amount of anticipation and stress from this situation that these activists have found themselves in. Once things resolve, it's actually quite disappointing but having to do that slow climb up the big roller coaster was fun and scary, so there's that.

Also, I don't think Roth knows how to end movies. His endings are almost always absolutely terrible and this is no exception. I want to say stay during the credits for even more contrite epilogue, but no, don't stay.

What was cool for me was that going into this movie, i was actually worried that I was going to make sick in the movie. Like people did during the Exorcist or Alien back in the day. I was honestly worried about this, but no, it wasn't even close. I drank my coffee slowly trying to fight the urge to check my e-mail a couple times. In fact the most gruesome scene is actually meant as comic relief and looks like Roth's audition reel for landing a zombie movie. He's for sure doing a Romero shout out during that scene. The difference....I wasn't scared AT ALL. Nor was I laughing.

My bloodlust got me to see this movie and now my brain is making fun of me for thinking I'd be scared or, at the very least, entertained. It's not an awful movie or anything, it's just not good at all.

You can skip it, you're honestly not missing anything. The only people that should see it are those that were haunted, like me, from the trailers and need to resolve that.