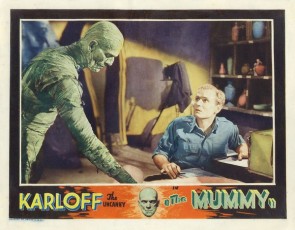 What a terrible curse!

After the somewhat random discussion of the 1999 remake of The Mummy, I thought I would revisit it since I hadn't seen it since it was first released.  I remember it being a pretty fun day at the movies with my dad and I've had a bunch of people tell me it's holding up really well, so I thought, "What the hell."  I picked the DVD up for cheap, got ready to put it in, but then I started thinking.  If there was one Universal Monster movie I watched less than the others when I was kid, it was The Mummy.  It was kind of lost on me back then.  I found it to be slow even by 1930s standards and always wished there was more of Karloff in the full-on mummy makeup you see in the beginning of the film.  I looked at the back of the 1999 version...125 minutes.  I looked at the 1932 one...73 minutes.  I popped the 1932 version in and shut off the lights.  And that, folks, is how I decide which movie I'm going to watch.

So this strikes me as a really strange movie.  I sort of got the feeling that Universal was trying to grab at anything they could get their hands on to make another hit monster movie and they ended up making a pretty good one along the way.  As it turns out, that's not far from the truth.  After the success of Dracula and Frankenstein, Carl Laemmle Jr. wanted to find a novel to base a Egyptian-themed monster movie on.  After coming up empty handed, he found a treatment about a 3,000 year old sorcerer in San Francisco.  He hired someone to re-write it, moved the story to Egypt, hired Karl Freundand, the cinematographer from Dracula to direct two days before filming, and that's pretty much how The Mummy was born.  It bears a striking resemblance to Dracula in story, and hell, it even opens with same piece of music from Swan Lake.

Despite story elements that I found derivative and hastily slapped together, there's still a whole lot that works really, really well here.  First off, that first scene.  There's some iconic moments in that scene and it's not just because Karloff's makeup is so incredible.  It's genuinely creepy.  I've watched a lot of terrific, atmospheric movies from the 20s and 30s, but few build tension like this first scene.  I love the large amount of silence as the assistant reads the Scroll of Thoth, the camera glancing back to the mummy in the sarcophagus to ensure the viewer that it hasn't moved.  Karloff's performance and screen presence is, as always, excellent.  He is playing a role that adds to the familiar Dracula feeling, but he pulls of being menacing, socially awkward, and sympathetic (as all classic monsters should be) equally well.  I really like the use of magic and the subtle presence of beings greater than man as well, it really goes a long way towards making it more than a Dracula wrapped in bandages and buried in gold.

The Mummy may not get the same respect as Universal's other monster movies, and while it's certainly no Frankenstein, it's a very solid film that I like about as much if not more than Dracula.

Again, I agree with you that part of the reason I overlook this one is that Karloff isn't a traditional mummy. In the end I think that makes it a better film though. Allowing Karloff to take control of the picture. Those close up shots of him are mesmerizing and the makeup does look creepy when highlighted. Plus, those scenes where he giving dudes heart attacks while there is no music playing...creepy! Karloff completely owns the film and it's worth seeing for that alone.

The Mummy has much better cinematography than Dracula and it's crazy to see the improvements made in such a short time. It certainly is worth revisiting if you're a fan of the Universal Monster films.

Michael Barnes replied the topic: #213108 22 Oct 2015 17:01
I hate to say it, but I think it's slightly better than Browning's Dracula if only because it does manage to break out of that Victorian parlor room drama thing. It certainly isn't iconic (mostly due to everything Lugosi says and does became iconic), but I still think it holds up better. I also like that it has that 1930s-era exoticism about it.

This film (and both Whale Frankensteins) were definitely Karloff at his absolute peak.

Mummies never really get a break...they are always on that second tier. I like mummies. I like The Mummy's Hand. I like Hammer's mummy movies a lot. I also like Curse of the Mummy's Tomb, the old GW game. Gosh, I want to get that again.

Digression- a rarely seen Karloff film well worth watching is Targets...it's a Peter Bogdanovich psychological thriller from 1968, so it's Karloff in his twilight years. The really cool thing is that it's very much about this transition from old fashioned monster to horror to modern HUMAN horror. Karloff plays a (get this) aging horror movie star contrasted with a Vietnam vet turned mass shooter. It's oddly topical even today, almost 50 years after it came out.
Read More...