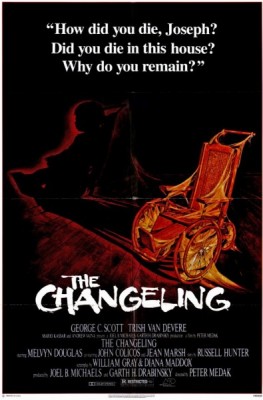 That house is not fit to live in.

I don't know what it is with the ghost stories this Halloween season, but they're really clicking with me in a way they never really have.  Much like how folks feel about The Babadook if they have kids of their own, maybe owning a house and having been alone in with so much space to myself makes these kinds of stories all the more effective.  I don't much believe in the afterlife and I've certainly never witnessed anything to encourage me to even entertain the possibility of ghostly activity, but hearing even the slightest of strange noises in the house when I'm by myself will set me on edge every time.

Which brings me to the only criticism of The Changeling.  After John Russell's wife and daughter are involved in a deadly accident in upstate New York, he decides to move Seattle where he goes on to buy THE BIGGEST OLD HOUSE ON THE PLANET.  Why one person, especially one who is dealing with loss and the ensuing loneliness would move into a place guaranteed to make you feel uncomfortable whenever the floorboards even think of creaking is beyond me.

I'm treating this review pretty lightly so far, but the truth is that I found this movie to be thoroughly chilling.  I don't want to spoil too much for those who haven't seen it, but this is a haunted house movie and a first rate one at that.  It's best enjoyed with the lights out and either alone or with one other person at the most.  I've talked about acting in horror films in previous articles, but it's absolutely top notch here.  It needed to be.  The cast is very believable, and because of that, when the paranormal elements kick in, those are believable as well.  The scene where John discovers the truth about the house he's living in and why it's haunted has to be one of best scenes I've ever seen in a horror film.  For lack of a better word, it's haunting and is an image you won't soon shake from your memory.  The movie does change gears in the third act, becoming more akin to the last act in a mystery, but the finale firmly reminds you that this is a horror film, and in a movie that's already given so much atmosphere and memorable imagery, manages to leave you with even more.

This is exactly the kind of movie that you should be watching this time of the year.

Columbob replied the topic: #213182 23 Oct 2015 10:42
I've never witnessed anything any paranormal ghostly stuff, even after having slept in the haunted room at this hostel by Loch Ness, although those haunted walks in Edinburgh are downright creepy.

But that doesn't mean I don't believe or that they don't exist. Some people are more attuned to these weird forces, witness my sister-in-law. She's had several encounters over the years, and apparently that unwanted "gift" was transferred to their second son, who's repeatedly over the years mentioned seeing someone in the house when there wasn't anybody else around. Although hush hush, don't talk to him about that!

3 years ago, in the early evening when the older kids were already in bed, my brother off meeting with clients, and my s-i-l was rocking/nursing the month-old baby by herself in the living room, around the same time every night or so she'd hear the door click, then often feel a weird, cold touch on her shoulders or neck, or just a presence. She was freaked out. My brother, who's as ghost-deaf as I am, was there once and also heard that door click! So they call this psychic/exorcist or whatever, when he was over he apparently instantly could tell that she had the "sight". It turns out the ghost was the original owner of the house from 40+ years ago who'd recently died, and came back to what he considered "his" house and trying to get these strangers out of there. I think they communicated with him and told him that it wasn't his place anymore and to go rest in peace, and it seemed to work.

Last summer, her sister was over and they decided to go do a haunted walk (WTF?!?) down in the old Québec City. They go to this cemetary/Church, probably one of the oldest in America (besides older Native civs). In that Church she could NOT concentrate on whatever the guide was prattling on about as she kept feeling these gusts of cold wind whipping about her head. Her sister even looked at her wondering what she was doing. She couldn't wait to get out of there.

Egg Shen replied the topic: #213187 23 Oct 2015 10:53
A guy in college knew I was into horror films and he told me about this film. He said it was one of the most chilling things he'd ever seen. MOST horror movies have very little impact on me. However, the one exception is a well done ghost story or haunted house flick. I don't know why, but they sometimes freak me out. Since college I've had a few people mention The Changeling to me and they always say the same damn thing - "dude, it's really fucking creepy". And you know what? I've kind of sort of avoided the film because of it. I've just never wanted to face the fear of watching it I guess. I've come close to buying it once or twice, but I've never actually done it. I'll end up tossing some shitty film like Evil Toons into my amazon cart instead.

I think this might be there year I finally stop chickening out and just watch The Changeling. It's been a long time coming.

Michael Barnes replied the topic: #213238 23 Oct 2015 17:06
This is a lovely ghost picture...it's one of those mature, stately ghost stories like they just don't really make anymore. "Chilling" is definitely the best descriptor of it...there's a autumnal vibe through the whole thing that really captures a sense of the supernatural slightly seeping in to an otherwise real-world situation.

I'm concerned about Kraul's comment. SURELY he means The Haunting remake and NOT the Robert Wise Haunting, which is in fact the best haunted house movie ever made, right?

As for real ghost stories...I've got some GOOD ones. I've seen some things. I can tell you- speaking as complete skeptic and hypercritical over-analyzer- that there are some ghost stories that are 100% true.

Michael Barnes wrote: I'm concerned about Kraul's comment. SURELY he means The Haunting remake and NOT the Robert Wise Haunting, which is in fact the best haunted house movie ever made, right?

I was referring to The Haunting (1963). It's a good horror film. The Changeling is a great horror film. The reason is that the Changeling, if you strip the paranormal stuff away, still has a really strong story, and it acts as a better support device. And I don't think the Haunting was quite translated as well from the source material--The Shirley Jackson novel--as well as it could have been.

ubarose replied the topic: #213251 23 Oct 2015 21:32
The Changeling is a great haunted house movie. The Haunting is pretty much the best portrayal of agoraphobia ever.

moofrank replied the topic: #213260 24 Oct 2015 00:38
I prefer The Changeling myself. The Haunting is a more complex movie with a TON of subtext and more interesting characters. The Changeling manages to be far better for just being scary/creepy.

Two somewhat similar scenes: Sounds throughout the house. Haunting has two scared women in a room, and the things going on in that scene are a few creepy noise amidst a complex pscyho sexual scene. It says a ton about the characters, their behavior and relationship. It is REALLY hard to point to a scene and call it scary. It is only the entire context of the movie.

The Changeling's version just has Scott alone listening to pipes knocking and sighing. He just reacts. It is dark, and he is alone, and the actual sounds in that scene are completely creepy. And that's far from the scariest scene in the movie. It totally delivers, enough that I get shivers from walking past old fashioned wheelchairs. We need to find a wheelwright to recondition ours---bought JUST because of the Changeling.

SebastianBludd replied the topic: #213275 24 Oct 2015 10:53
I watched this one for the first time last night and I was blown away. It's easily in the top echelon of haunted house movies and it's criminal that it's relatively unknown. It's one of those films that does a hundred little things right where there aren't little miscalculations and breaks in tone that break immersion and George C. Scott is brilliant. The editing really makes this movie, whether it's that wheelchair, or, my personal favorite, the jump cut to the flashback that shows what really happened in the house.
Read More...