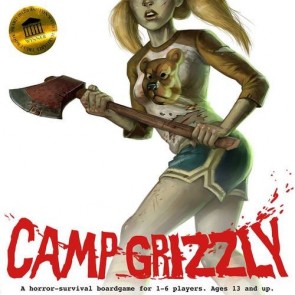 The first Fortress of Horror series is winding down to the end.  I've watched more horror movies in the last 2 months than I can count.  I lucked out this year as most of it was really, really good.  I've got one more article in me after this one, and sadly I won't be able to get to any of the requests that I got (though I did watch all of them).  There's always next year!  I probably averaged five horror movies a week this year, there was no way I could have covered everything I was watching.  And as much as I would have loved to get a Alien or the James Whale Frankenstein movies in, what is there left to say at this point?

Halloween is more than horror movies though, so I thought we'd take a look at some of the other cool stuff I celebrated the season with.

Though it may not have come through in my article, I do like the Friday the 13th series for reasons I can't explain, despite them being so, so bad.  It just is what it is.  Camp Grizzly by Ameritrash Games seems to understand with perfect clarity what makes those movies tick.  The cliches are easy enough to depict on cardboard, but this game goes above that and understands the chaotic, visceral nature of the slasher genre and turns that into the mechanics of the game.  Your goal is simple.  Survive and escape before Otis, a killer in a bear mask, murders all the counselors .  Attempting to escape triggers one of 8 possible "finales," which I've found are likely kill off the majority of the remaining campers if not all of them.  Some of the finales are really inventive, my favorite involving having to swim away from the killer after you find the boat won't start.  I really love how you can see where Otis is but it's never guaranteed that that's where he'll stay.  He is a  presence on the board, one that strikes terror when he's near, but he's also everywhere.  This is definitely an "enjoy the ride" experience though.  Much like DungeonQuest, you just go into it not expecting to make it out alive, take what the game gives you and hope for the best.  We're hosting a Halloween party this year, non-gamers will be there, and you can bet that this is that game I'll be bringing out.

Year Walk is a little adventure video game that's been out on iOS and PC for awhile now, but developer Simogo has just brought what they call the definitive version of the game to the Wii U.  It's an exploration of the old Swedish tradition in which men would fast and then wander into the wilderness in hopes of seeing the future.  Atmosphere is the heart of Year Walk, complimented perfectly by its art style and soundtrack.  It's a very surreal experience yet the puzzles still manage to have a logic to them.  The Wii U gamepad is put to good use here and I can't imagine playing it any other way.  You have a small collection of research notes that explains about the year walk tradition as well as elements of Swedish folk lore.  It adds an air of authenticity to the game and is put to use in utterly BRILLIANT ways later on in the game.  It is short, but I think the game cost me $7 or so and I'll likely come back to it next year.  If you own a Wii U and want to immerse yourself in a horror (not terror) experience, shut off the lights and set aside a few hours for Year Walk.

Alright, before we all harp on me for eating this crap, know that I do work for the country's leading all-natural and organic grocer.  At the end of day, I'm a little tired of hearing about fucking quinoa and kale.  I do eat pretty good, but I reserve the right to exclusively eat kids stuff when it comes to cereal.  And when it comes to Halloween kids cereals, all bets are off.

I'm a huge fan of the General Mills Monster Cereals.  Ask anyone who's set foot in the game room here at Look Manor, I've got empty boxes of the stuff lining the walls.  Count Chocula, Franken Berry and Boo Berry are guaranteed to show up on the shelves every fall.  A couple years ago we got totally spoiled by the return of Fruity Yummy Mummy and Frute Brute, the later of which had never been in production during my lifetime.  I'm glad they don't put all five out every year, it wouldn't seem so special when they do, but the fact is that the last couple years have felt lacking.

I picked some this Halloween Crunch up on a whim, and boy am I glad I did.  This stuff is about 80% crunch berries.  Only the crunch berries are ghost shaped.  Ghost shapes that turn milk green.  I dig the color palette used on the box, classic Halloween colors.  There's a Cap'n Crunch pumpkin pattern on the back of the box that I'm sure won't be used by any kid any where, but who cares, what's in the box is great.  It paired perfectly with a few Real Ghostbusters episodes.

One more Fortress of Horror to go.  What's it going to be?  Possibly the ultimate Halloween movie, certainly one of them.  I'll give you a hint:  It's not the turd that is Trick 'r Treat.

FINAL SCORE: Pretty much the worst thing ever.

You should have watched that Stuart Gordon/Brian Yuzna Necronomicon anthology instead...it's rarely seen, rarely discussed...but it's pretty good. I had the Japanese laserdisc (NERD) back in the 1990s. Still not the "ultimate" Lovecraft picture, but it was fun enough. Covered some unusual stories and it has Jeff Combs as Lovecraft himself.

My Halloween viewing this week has been Fulci's The Beyond, The Changeling, the Hammer version of The Mummy, Bride of Frankenstein and Polanski's Fearless Vampire Killers (or Pardon Me, But Your Teeth Are In My Neck). Will probably hit The Exorcist, The Others, Black Sunday and House of Usher before it's all over. Probably Dr. Phibes at some point too.

Camp Grizzly...it looks like a cornball, cheesehouse version of Psycho Raiders. One of those games made by people lampooning "b movies" that haven't really done much actual b movie watching. But I dunno, it's definitely more accessible and "fun" looking than Psycho Raiders.

Year Walk is BRILLIANT. Mindblowingly good. One of the best horror games I've ever played. The first scare moment, I just about threw the phone. And it's not a jump scare at all. The ending is a little doofy, but man, what an amazing experience.

Josh Look replied the topic: #213501 27 Oct 2015 17:21
I get where you're coming from on the looks of Camp Grizzly, reaching back to LNOE, but it's the real deal when it comes to that subgenre. I actually like the art. I'm glad they didn't do that dumb photo crap, but thy didn't go super dark either or totally cartoony. It's a comic book style, really. And it really does capture that genre, right down to turning away anyone looking for a smart, elegant experience.

Good call on Eyes of Fire, btw. Perfect Halloween time flick, it's a crime it's not on DVD/Blu-Ray. I was intrigued by The Witch, still am, but it will be interesting to see how similar they really are.

E.T....hadn't thought of that, but makes sense. I've always loved how this kid finds an alien and first order of business is teaching him about Star Wars. Not the household names, he goes right to the obscure end of the pool, with Lando being the most prominent character he mentions.

Josh Look replied the topic: #213519 27 Oct 2015 18:51
I remember when my parents took me to see Batman Forever and told me afterwards it was the little girl from ET. My younger self couldn't believe it.

Michael Barnes replied the topic: #213521 27 Oct 2015 18:57
E.T. is also actually really scary, which is more than you can say for a lot of horror pictures. It captures a very childlike sense of being afraid of something...but also being attracted to it. Like E.T. himself.

Good call on Eyes of Fire, btw. Perfect Halloween time flick, it's a crime it's not on DVD/Blu-Ray.

Awesome, we can have an Eyes of Fire fandom Con. Just me and you.

I don't really know why that one just completely dropped off the map...it has an unusual premise, is pretty well-made, and it was in circulation at a time when people would watch ANYTHING down at the video rental place. But I guess it just never really found the right kind of traction to emerge as even a cult concern.

Fun fact- I watched it and The Wicker Man on the same night.
Read More...