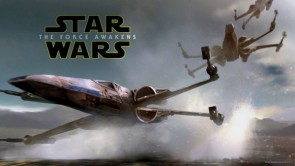 This is a tough review to write. I had to see it a second time to have a proper viewing without my sky-high expectations getting in the way. People say expectations were low because of the prequels, but it's still Star Wars and it's JJ and the sky isn't the limit when it comes to how great this could be.

After a first viewing, I got the impression it was a movie that I loved watching but didn't really like. The 2nd viewing was much better (IMAX) and I certainly did like the movie very much. The movie FEELS like Star Wars which in my mind means that it is a total success. There are scenes I totally loved (Rey on Jakku, x-wing attack over water) and some which gave me pause. But the former far outweighs the latter. I loved the use of humour, the flawless special effects, the characters.

When you have strong characters, casting becomes primordial in importance. Rey is fantastic and I was surprised by how much I liked Oscar Issac as Poe Dameron. Not once did I think I was watching Inside Llewyn Davis, which means the performance was strong enough to not draw me out. Where the movie loses the most points with me is the casting of Gwendoline Christie as Plasma, Andy Serkis as Snoke and Greg Grunberg as Snap Wexley. With Plasma, you can't cast these iconic voices amongst shared fan base franchises. Everytime she spoke, I was in Westeros. I don't want to be in Westeros. I want to be on the Star Destroyer scared out of my mind. Snoke looks and acts way too much like Gollum. Thank goodness it was a holographic image, I hope it's not worse when this flimsy CGI character isn't as distorted. And the second I saw Greg Grunberg not even partially disguised, I was the taken out of the movie at light speed. Oh, it's that guy from other JJ materials like Felicity and Lost. JJ likes this guy, i get it. But he also likes Simon Pegg who I didn't even recognize in this movie. That's how you do it.

That's a lot of real estate in this review on casting but it's SO important to get right in movies that require full suspension of disbelief. Lots of people had a problem with Carrie Fisher in this capacity but I loved that you FELT her age in this. I didn't feel like they tried to mask it or anything. Here's a wise older woman, no longer a princess, who coordinated the retreat from Hoth and surely learned much from Mon Mothma... like I said, I could feel all of this from her.

In the end, it's a movie that's meant to evoke feelings. In fans primarily. I felt great watching it and it left my heart full and happy. My mind struggled with parts but overall it was happy too. I'm looking forward to the next iteration.