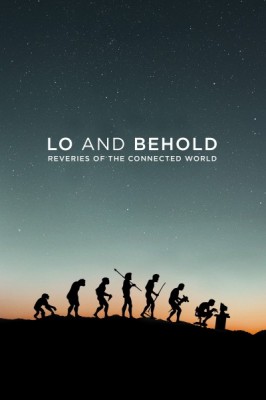 Very interesting documentary on the advent of the internet (not simply the worldwide web, which I keep mistaking as the internet). Often the quality of documentaries are very much determined by the personality of the director/producer. In this case, with Werner Herzog, we're very fortunate to have an extremely likeable person at the helm. You never see him but once in a while you get glimpses of his personality that lapse into the interviews and I find really bolsters this movie. The first few times he spoke, i was wondering what that creepy guy from Jack Reacher was doing in a documentary about the internet.

The movie is divided into several chapters and let me tell you, as with most films broken up into short stories, the quality and interest of the various chapters is divergent. I literally fell asleep in some of the first two chapters, then woke up to get preached at why internet anonymity is inherently evil and the work of the devil. Luckily, the film really picks up after that and explores all sorts of nuance in how our civilization is extremely fragile since the reliance on the internet. You won't look at the Sun the same way after this.

I also like how in a very careful way, the film sort of calls out Elon Musk for not focusing on what's important when exploring his Mars project. I like it when scientists speak. They are smrt.

Overall I'm very glad I saw it and would simply warn against watching this late at night, you need to be alert.

Brain rating: 4 stars (there's a bit of scape-goating going on. internet or no, addicts will still be addicts and jerks will be jerks).