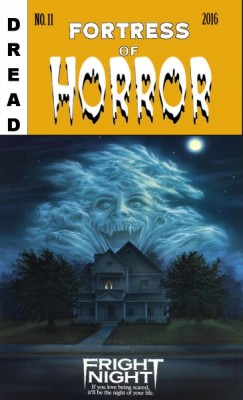 Oh, you're so cool, Brewster!

Fright Night is a movie about that age-old dilemma every boy deals with at some point during his teenage years:  What to do when a vampire moves in next door?  Like many of us did when we were his age, Charlie Brewster immediately makes life difficult for himself.  He goes around spying on the vampire and his henchman (which we all know doesn't work, the vampires can see through bushes), he goes to the police (again, bad move, as vampires always get along famously with law enforcement).  The vampire in this story, Jerry Dandrige, wastes no time tightening the screws on poor Charlie.  He manages to get himself invited into Charlie's house and makes it look like he might put the moves on his mom at some point.  Dandrige really goes for the jugular when he instead goes after Charlie's girlfriend, little miss Marcy from Married with Children.

Charlie really has his work cut out for him.  Going toe-to-vampiric toe with Dandrige isn't going to be easy, especially since ol' Jer' is the real deal.  He wears a sweater that both me and a friend could crawl through without touching, not to mention his stunning leather jacket, which sort of works as a cape.  His secret weapon though has to be the cassette tape he was with his own theme song on it.  I'm not exaggerating here, Jerry Danrige has a cassette tape with his own theme song on it, a one-two punch of lush synthesizers and swirling electric guitar.

Lucky for Charlie, he gets an in with Peter Vincent, legendary vampire killer.  Vincent, who surprisingly doesn't look like an ape in this movie, lives in the apartment that I want to live in when my life eventually goes south.  It's really, really cool monster memorabilia wall to wall in there, I love it.

All joking aside, this movie is really fun.  Yeah, it's goofy, runs a little longer than it should, but it delivers the old fashioned monster goods.  It's surprisingly well acted and has some terrific creature effects.  It had been awhile since I'd seen it and more than a few times I couldn't help but say, "Damn, that's cool."  I also got to see it in a theater and man, does it play well to an audience.

Mr. White wrote: It's been years since I've seen Fright Night. I'll need to check it out again this season.

I do really dig it and, in the right mood, it's probably a 4. It does have some pacing issues and at a full 2 hours, it's a little long. It's one I'm always more than happy to watch though.

You should be seeing these once a week now. Last year I had had a few weeks where I had two come out just because I had written so many and didn't want to go past Halloween. Could happen again this year.

Plus, the podcast with Egg Shen should be dropping soon, too, and it's going to be a lot of fun.

Million Dollar Mimring replied the topic: #233728 09 Sep 2016 11:13
During the late 90s, I had a job with a southeastern video chain. The job gave me access to a wide assortment of movies; Fright Night was one of the movies I selected. Growing up, a friend always chose to rent Fright Night II, which I seem to remember for its titillation and not much else. My friends and I had already absorbed several horror films (Evil Dead, Evil Dead 2, Night of the Living Dead, Dawn of the Dead, Dead Alive, etc.) Not remembering much, or if I'd even seen the film, I decided to rent Fright Night.

Fright Night straddles the line of homage and 80s cheese fairly well. The biggest compliment I can pay to the movie is its ever present sincerity to the genre. Even with its faults, you can easily sit down almost anywhere within the movie and simply have a good time.

Josh Look replied the topic: #233772 09 Sep 2016 13:26
Fright Night was one of the first movies I watched after I signed up for Netflix years ago. It was such a pleasant surprise. Before the full blown adulthood Halloween obsession started, watching Fright Night, along with Nightmare On Elm Street (which I had also never seen until Netflix) and House of the Devil got me back into horror movies in a big way.

Shellhead replied the topic: #233797 09 Sep 2016 14:44
I enjoyed Fright Night back in the day, but I suspect that I would find it too cheesy now. It might still be worth a re-watch at some point, just to watch Amanda Bearse trying to play it straight. I'm surprised that anybody here found it scary. Some college friends of mine were huge fans and watched Fright Night many times. One night, the owner of the tape made a copy, and spliced in some horrific footage from The Thing featuring the dog-thing's head splitting open like a banana peel. Now that was intense, and totally freaked out the women at that party.

SebastianBludd replied the topic: #233806 09 Sep 2016 15:26
3/5 is about right. I'd bump it up to 4/5 if they hadn't decided to go with such cartoonish-looking teeth for the vampires. And that huge fang mouth on that female vampire has aged especially badly, and that's coming from someone who prefers practical effects - including stop motion - to CGI. But the movie's heart is in the right place and it hits more than it misses, I just don't consider it to quite be a classic.

Million Dollar Mimring wrote: Growing up, a friend always chose to rent Fright Night II, which I seem to remember for its titillation and not much else.

The only thing I remember from Fright Night II is a vampire with big hair slowly roller skating into some fog and decapitating someone. It's one of the dumbest things I've ever seen.

Josh Look replied the topic: #233814 09 Sep 2016 16:03
Yeah, it's plenty cheesy, no two ways about that. The fangs are pretty goofy looking, and like I mentioned, Jerry puts his own song on at some point. The entirety of his costuming choices hasn't aged well, especially when he's doing all the classic vampire poses and using his jacket like a cape. It's also incredibly awkward, with full grown man preying upon and having romantic scenes with characters who are supposed to be in high school.

But it's still a ton of fun. I love some of the effects at the end. You get the feeling that it's lamenting the end of classic monster cinema on some level but it's going to give a good, spooky time regardless. Much like Monster Squad you get the idea that the filmmakers grew up *loving* the old Universal and Hammer movies, the kind of kids who spent hours pouring over issues of Famous Monsters and building Aurora monster kits. I'm always going to relate to that kind of love for that stuff.
Read More...