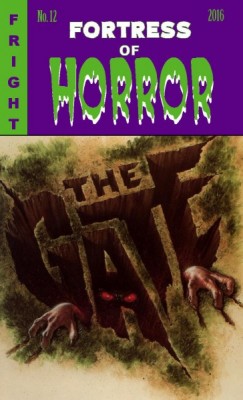 Despite being an avid fan of 80s movies, especially 80s kids movies, The Gate managed to elude me for many years.  I'd never even heard of it until I was in my early 20s, and that was only after I caught the tail end of it on TV one night.  Now that Stranger Things has become the most popular show in past, present and future human history, I thought it was time to go back and watch one of the lesser known movies it references.

So this is a kid's horror film, and and 80s one to boot, so it doesn't hold any punches.  It has some weird, creepy effects that still look great today, some of which might rank just under the infamous "steak/bathroom" scene from Poltergeist.  You run the risk of nightmares showing your kids any scary movie, no matter how tame, but I imagine this one would be terrifying for little ones.  It's also about summoning demons, which kind of blows my mind given it's from the era of the Satanic Panic.

The plot is really straightforward.  Glen and his friend Terry accidentally summon demons while Glen's parents are away, the demons needing two sacrifices in order to take over the world.  I'm fairly certain how the demons are summoned was inspired directly from The Evil Dead, which, again, blows my mind given this is a kids movie.  What follows is one spooky sequence after another, complete with levitation, a melting phone, a melting face, a rotting head bursting open, a zombie that comes out of the wall, and lots of tiny demons.

Not only does this movie service as a primer to the horror genre for kids as far as content and scares go, but for the things needed to forgive the genre of in order to enjoy it.  The Gate doesn't have the same heart as other movies of its kind like The Goonies or the more direct relative, The Monster Squad.  Because of that lack of charming character it feels very much like a horror movie, while Monster Squad is more of an adventure movie with recognizable horror characters in it.  You're here to be creeped out, not watch kids exchange cute banter about kicking Wolfman in the nards.  That being said, Terry is the kind of friend my 32 year old self wishes my 8 year old self had.  Terry is my kind of people, with his sleeveless denim jacket with a giant metal patch on the back and a He-Man T-shirt on underneath.  I want to be Terry all the time.

As far as what Stranger Things might have borrowed, there's more than a few scenes with flickering lights, even an exploding bulb, and things coming out of the wall to take people back with them is definitely from The Gate.  It's a strange, overlooked movie, but it's so damned inventive.  And just like how Stranger Things made me feel, The Gate makes me wish that stuff like this was still made.

Columbob replied the topic: #234388 16 Sep 2016 09:09
I remember catching the end of this on tv on a weekend afternoon as a kid (pre-teen maybe?) and always wished I could have watched the whole thing. Fat kid telling the newspeople at the end that a burger tried to eat him or something.

There are so many good 80's horror films. I feel modern horror is just too ghost focused.

I've never seen this, but have always heard good things about it. Looks like ive got something to watch next month!

Yeah, this movie is so cool. It's rather unique, very inventive, and packed with cool effects. They don't make 'em like they used to, but man, do they REALLY not make them like this anymore.

Tomorrow's movie was polarizing when it came out, still is now. Discussion should be interesting.
Read More...