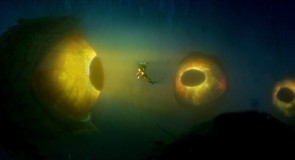 Incredible animated film that loses some points the more you think about it.

From the studio that brought us the superior Coraline, here we have young Kubo, voiced by the young Stark son that barely gets more screentime in the entirety of Game of Thrones than he does here, who after forgetting to follow Gremlins-like rules of not feeding koalas after midnight, finds himself on an epic Zelda-like quest to acquire three or four magical items, including the legendary Sword Uncomfortable. Each one is naturally guarded by a dungeon boss, leading to some epic  set pieces that I'm not sure I've ever experienced with such a feeling of grandeur in a animated film before. If you want to know why they feel so huge and real, make sure to stay during the credit roll.

At first my ears rejected the voice work of Matthew McConaughey, as I couldn't accept this Lincoln-driving narcissist as someone that would see Kubo as a hero when we all know he sees himself as his own hero, but he grows into the role very well and provides some good comic relief. Other voice acting is all very good, with a weird cameo by George Takei.

The movie is a total visual feast for the eyes but your brain will have a hard time trying to unravel the many threads the story is trying to string together. Also, i brought my 5-year old girl to it and she wasn't a fan. I think it's much more of an adult-targetted animated film than one for children.

I still think it's worth seeing on the big screen just for the art alone. Everything else is just a plus. I'm curious if the next movie out of this film studio will again reference implied eye trauma. It seems to be an obsession of these guys.

Not sure if I prefer this to Zootopia as my favorite animated movie of the year (so far). I think this may very well take the Oscar.

heart rating: 5 stars (you can't argue with that)