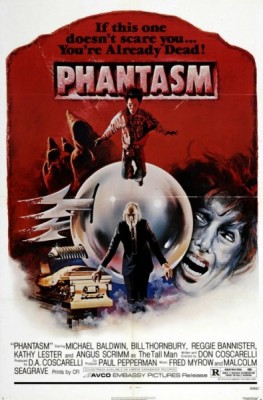 You play a good game, boy, but the game is finished, now you die.

Phantasm is one strange movie, and a difficult one to talk about without giving too much away. Right from the start and all the way up to the last scene, something about it is off.  Early on, the plot, the editing, and visuals are rather unusual, but not so much that any of it puts you off.  The film becomes more and more outlandish as it goes on, but it happens so gradually that it doesn't quite feel like it's so much that it snaps you out of the spell it casts.  It seems to operate on perfectly executed dream logic.  It's just strange enough to capture your curiosity, answers very little as it moves along, and takes you to a place you'd never expect it would end up but by that time, it's already too late.

Anyone who's seen Phantasm will know that there's good reason why little of it makes any sense the first time you watch it.  The ending hits and you find yourself retracing all the steps, trying to make sense of it, trying to find some detail that disproves the last few minutes of it.  Yet repeat viewings reveal that the ending was clear the whole time.  For as dated as it is in a few areas, this makes it quite remarkable.

Phantasm builds tension like no other movie I've seen does.  Instead a slow, steady build up in a single scene, the way it feels like it's being made up as it goes along creates such a unique, unsettling atmosphere that rises as the film progresses.  It's also rare when a twist ending actually gets better on multiple viewings.  I hope the new remaster of it encourages a new edition on home video, as while it is dated, there's nothing else quite like it in horror cinema.

the_jake_1973 replied the topic: #235735 07 Oct 2016 08:43
Definitely one of my favorite movies. I want a Harry Potter/Phantasm mashup where the Tall Man is head of Slitherine and he replaces the Snitch with The Ball during a Quidditch game.

SuperflyPete replied the topic: #235741 07 Oct 2016 09:45
The movie scared the fuck out of me when I was a kid. The Ball shooting blood out the back was terrifying for some reason.

SuperflyTNT wrote: The movie scared the fuck out of me when I was a kid. The Ball shooting blood out the back was terrifying for some reason.

Because it totally is! It's so weird. How did he come up with that shit is beyond me.

Yeah, the zombie dwarves are weird, too. Everything about it, very strange.

Shellhead replied the topic: #235758 07 Oct 2016 11:47
I like Phantasm, but I don't love it. Some great imagery strung together with a weak plot and some dreadful acting. A couple of elements from Phantasm show up in the Ptolus setting that I used for my big D&D campaign.

Phantasm II is not as good as Phantasm, though there is a fight scene where both combatants have a chain saw.

Josh Look replied the topic: #235774 07 Oct 2016 15:55
The acting is pretty rough. Plot in a horror film always gets a pass with me if it has great imagery and atmosphere, which it certainy has.

It has a really resonant theme- the whole thing is about a kid coming to terms with the reality of death. There's much to be about the imagery of death in it (mausoleums, graveyards, hearses, coffins, etc.) and the off-screen death of the parents looms over the entire story. I think one of the most weirdly powerful moments is when Mike (who spends an awful lot of time in graveyards) sees the Tall Man single-handedly pick up that coffin and throw it in the hearse. Without warning, Mike sees this dude exhibit the strength of six men, and it's like this quite moment of awe. It's how this movie works at its best, crossing the line into surrealism and un-reality at will.

There's so much inventiveness and heart in the film that I'm willing to forgive a lot of the more slipshod elements. The ball is just an INSANE concept, totally bizarre and unique. That thing flying through the white mausoleum, sticking in the guy's head and then spraying blood like a spigot is one of the great horror images. But then you get this goofy, down-home guitar jam with Reggie and Jody that you just know was some spur-of-the-moment BS that they decided to do on the shoot day.

When I first saw it, I was maybe 13 or so...and it was the first time I can remember a movie directly, specifically referencing other genre stuff. So you had these very specific references to Dune, of all things. And then at the end, there was this genre twist that wasn't like ANYTHING else going on in 1979. The only other film from that era I can think of that even attempted to "go cosmic" was the tragically underrated Watcher in the Woods.

And that music, it's go good. And that freaking Hemicuda, that is the greatest car ever.

John Myers replied the topic: #235776 07 Oct 2016 16:14
Phantasm is one of the rare movies that captures the experience of having a nightmare rather than the experience of someone trying to explain a really intense dream they had to you.

But the plot of Alien? It's non-existent. It was also made by a major studio. Of course it's going to be the more thorough of the two, but I'd argue Phantasm is just as inventive and has more heart in the making of it.

Black Barney replied the topic: #235786 07 Oct 2016 19:30
Phantasm used to scare the hell out of me until I finally saw it. The trailers scared me and the box in the video store always really scared me cuz I couldn't understand it.

Josh Look replied the topic: #235788 07 Oct 2016 19:50
Not at all. But let's not harp on Phantasm for having a weak plot (which it doesn't in the context of what it's trying to accomplish) and then put Alien on a pedestal for being any better in the plot department.