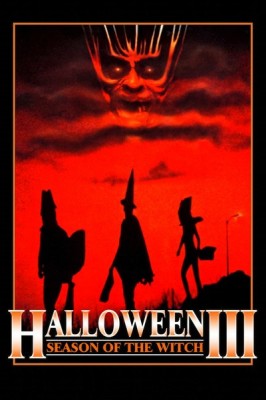 All witches, all skeletons, all Jack-O-Lanterns, gather 'round and watch.  Watch the magic pumpkin.

Once again, everyone is wrong.

Halloween III doesn't have the best reputation.  It currently holds an average rating of 4.6 on IMDb, a 37% on Rotten Tomatoes (25% of the audience liked it), and an aggregate rating of 38 on Metacritic (with a 5.8 user rating).  People do not like this movie.  The biggest complaint?  "Where's Michael Myers?"  That's right, folks, this is a Halloween film that doesn't not feature its infamous Shatner-faced killer.

What happened is that after Halloween II (which in my opinion is terrible and is ignorant to much of what made the first film work so well), John Carpenter wanted to do something different.  Instead of driving Michael Myers into the ground, he pitched the idea of making the franchise into an anthology series, with a new movie every year with the holiday of Halloween being the thread that connects them.  I suppose that before the internet, getting that idea across to the audience was quite difficult.  Going into it with that knowledge, I can't see how anyone can call this a bad movie.  In fact, I think it's pretty great.

All the kids want a Silver Shamrock mask for Halloween.  You really can't blame, these masks look great.  After a bizarre incident at a hospital where a man was murdered and his killer sets himself on fire, the man's doctor and his daughter decide to investigate.  The clues point them to the Silver Shamrock factory.  As is the case with most of these things, the less said the better from that point.  I will say that this movie goes dark.  Really dark.  Much darker than I think Hollywood is willing to go these days.

John Carpenter did not direct this movie, but he did produce it and work on the score.  I love just about all of his scores, but this might be his best work.  There's nothing a catchy as the original theme from Halloween, but the atmosphere it creates is terrific.  The Silver Shamrock jingle that plays throughout is irritating and somewhat infectious, making what it becomes during "The Big Giveaway" scene entirely haunting.

Just like the first Halloween, Season of the Witch tells quite a chilling tale, but what really makes it special is how it manages to tap into the mystery, the allure, and the perceived danger of the holiday.  Halloween III has the original beat in that regard.  This is a really well-done movie, perfect for the season, and is sure to be one I go back to in years to come.

Matt Thrower replied the topic: #236143 14 Oct 2016 04:30
Agree. This is criminally underrated. Was literally just defending this in a conversation with some friends before I came here.

What really makes it work, in my opinion, is the bleakness of the subject matter. There's no gore, no torture or other cheap shocks yet, as you say, it works toward a far more horrid conclusion than most modern films would sanction.

Josh Look replied the topic: #236144 14 Oct 2016 08:00
I'm curious as to how much writing input Carpenter had in this. He's uncredited as a writer for it, but he apparently had some input. This would fit nicely with his "Apocalypse Trilogy."

Egg Shen replied the topic: #236145 14 Oct 2016 08:04
I will argue that this movie and the original Halloween are the only two films in that ENTIRE series that are any good. I absolutely love it. It's funny that you mention how much you dislike Halloweeen II and I couldn't agree more. It's a terrible sequel. Carpenter really phoned that one in. Not to mention he came up with the brother/sister nonsense after he got blitz on Budweiser while writing the script.

Even though Carpenter didn't direct Season of the Witch his fingerprints are all over it. The film FEELS like a John Carpenter movie. Oh and the music...God DAMN! The track "Chariots of Pumpkins" (which is a great fucking name) really gets things going. The rest of the music is moody, eerie, synthesizer magic that gives the movie an otherworldly feel.

It pains me to think that we could have gotten yearly releases for the Halloween franchise that dealt directly with the holiday and not Michael Myers. I think the first Halloween is an all time classic, but almost everything else with Michael Myers ranges from average to flat out awful. For a few years the big mainstream horror box office draws of the Halloween season were Saw and Paranormal Activity. I'd love for them to revisit the anthology idea and give horror fans something to get excited about come each and every October. Instead of rebooting the series with Myers again, I'd love for them to circle back to this idea. It will never happen though.

This might just be my favorite piece of music that John Carpenter has ever done.

Michael Barnes replied the topic: #236154 14 Oct 2016 09:31
The film is a total mess but it is one of those rare films where concept and atmosphere elevate above the junk heap. I've always argued that if it were just titled "Season of the Witch" and had no affiliation with what was by then a successful franchise then it would be regarded more highly. It also feels like it needed a little more time to gestate. If it had come along closer to They Live, I think some of the anti-corporate satire might have been stronger and god knows the effects would have been better. There is a brilliant movie here, it just wasn't nurtured and executed to its fullest potential for a number of reasons.

It is one of the best Carpenter soundtracks though.

The Silver Shamrock jingle is just the best...and that flashing pumpkin, when I was a kid I was scared to look at it!

We watched Teen Wolf with the kids this weekend and two Miles Goodman scores stood out to me. Fantastic.

Unicron replied the topic: #236172 14 Oct 2016 10:45
All of my fellow snobs in film classes loved this too. I loved the original Halloween, but this is the only one that I saw as a kid in 1987 a few years after it had come out and the reveal was really chilling. Barnes is right though, this film is a bit of a mess, but quality nostalgia, and an ambitious gambit for a franchise that never did anything ambitious ever again.

The second film in the series was rubbish. The original film, for all its merits--I think Carpenter borrowed a lot of stuff from Bava, Argento, and some other '70s Italian directors. In my humble opinion, if we're talking North American slasher films, Black Christmas kicks Halloween to the curb.

Yes, boys and girls, it’s that time of year again. It’s that nebulous span between the late-summer bombs and the holiday hits, when the public faces a mediocre selection of movies, such as Halloween III: The Season of the Witch.

In this slasher flick, an evil genius named Cochran (played by Dan O’Herlily), is plotting to destroy the United States, through a bizarre combination of advanced technology and ancient sorcery. As an Irish millionaire who got rich from selling novelties and gag items, he visualizes this scheme as “the best joke of all!”

Cochran utilizes a grotesque version of the Trojan horse ploy by selling Halloween masks, which come complete with microchip implant. At the conclusion of an eight-day countdown to Halloween on a commercial campaign, a subsonic signal is activated. At this signal, the hapless trick-or-treater wearing the mask has his brain transformed into poisonous snakes, spiders, and other creatures. These assorted creepy crawlers then proceed to attack other nearby victims.

True to horror movie tradition, the square-jawed, macho hero, Tom Atkins, and the dewy-eyed heroine, Stacey Nelkins, attempt to foil the villain’s plans. All they have to do is get past the high-tech security system and a veritable army of androids that protect Cochran’s factory/headquarters. After a decapitation, an eye-gouging and a few other gory scenes, including the surprising fate of the heroine, the movie ends in a chilling cliffhanger.

Although in many respects a typical slasher movie, Halloween III: The Season of the Witch contains a few differences. For a movie about Halloween, the appearance of the androids was unexpected, although they were immediately recognizable as such to anyone who saw Blade Runner last summer. To break the tension, there were a few capricious touches, such as the cameo appearance of the original Halloween on a television set. Even Cochran displayed a wry sense of humor, by applauding the hero’s efforts, just before meeting his own demise.

Besides the title, the only real connection between Halloween III: The Season of the Witch and its predecessors is the director, John Carpenter. Like too many other slasher movies he has done, Carpenter follows the basic horror movie formula. But behind the grisly murders and the shock value of certain scenes, there isn’t much of a story, or for that matter, much to be afraid of. In the end, the only thing convincing about Halloween III: The Season of the Witch is the fact that Halloween is the season of the B-grade horror movie.

I cringe a little now at my youthful ignorance. Halloween III is a horror movie, but not a "slasher" movie. I was wrong about the level of Carpenter's involvement in this movie, and I failed to comment on the effectiveness of the soundtrack.

jpat replied the topic: #236211 14 Oct 2016 14:40
Whatever the merits/demerits of the rest of the movie, the fact that the ending has stuck with me since young adulthood suggests to me that it's a worthwhile movie.

Shellhead replied the topic: #236212 14 Oct 2016 14:53
The ending stuck with me, too because even as a teenager, I could see the value in tying the final scare of the movie to something most viewers would experience just after the movie. In this case, getting into a car.

Josh Look replied the topic: #236219 14 Oct 2016 15:34
I think it's quite telling of the current state of genre films that I didn't find this movie to be a mess at all. The sudden sexual relationship between the leads aside, I thought it wa coherent and well put together.

moofrank replied the topic: #237506 05 Nov 2016 23:36
H3 is a truly great horror-tinted adventure movie. The effects are clunky, but the entire plot is as deranged as Phantasm, and vastly entertaining. H3 also came at a time when it was Slasher Flicks all the way down...That is a subgenre that got really old, really fast.
Read More...