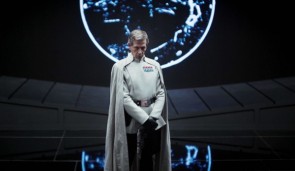 This was everything I was hoping Force Awakens would be. A true Star Wars movie for true original Star Wars fans.

It's not like they just threw in the occasional references just for kicks, all of the throw-back moments make a ton of sense to the storytelling. For instance, Gold Leader would still be Gold Leader, Red Leader would still be Red Leader since the events of Rogue One did not happen a long, long time before A New Hope (episode IV). So everytime we see continuity and things that make sense, my heart just warms up. It's amazing getting to FEEL what the Rebel Alliance was all about.

It's practically impossible to discuss this movie without talking about spoilers but this will be a spoiler-free review just the same. I think one of the major headwinds this movie is facing is that Lucas' prequels were very much movies for children. Rogue One, however is not. It is in many ways a war movie with an astonishing amount of violence and loss. I personally don't think children under 13 should see this. I mean, i remember being frightened of Darth Vader as a child, but not THIS frightened. For the timing of the events of Rogue One, this would be around the time that Vader wasn't as much a villain as he was a monster. Just be aware that this is a much darker movie than other Star Wars films and there is a great deal of killing, and some very cold killing. It is a war picture.

As an adult, those sequences and others couldn't have excited me more, however. It took me HOURS to calm down after the movie from the highs of all the final sequences and how beautifully this movie bridges to Episode IV, where it all started.

Also, the performances are excellent. They were very bold to create a droid with more depth and personality than C-3PO, but it works and adds greatly to this movie. In fact, all the performances are truly stellar. Any reservations I had about Forest Whitaker were put to bed, he's great as are all the major characters.

The biggest problem I have with any movie, especially for sci-fi or fantasy, is anything that takes me out of being in the movie. This particular film made many bold choices and some of them are around the use of CGI. I think anytime i would be putting in a character or sequence that is asking the audience to take a large leap of faith, I would ask myself, "is this really essential to this movie that I have this in here?" I feel like there were 2-3 sequences that should not have been so CGI-dependent. The technology is ALMOST there, but it's not there yet.

I think Disney might be a bit confused on how to treat their ownership of this license. Stores are filled with Star Wars merchandise aimed at kids this holiday season, but Rogue One is no Clone Wars or Rebels. This is Star Wars for adults, for those that saw and experience A New Hope in all its glory. I much prefer these types of Star Wars movies and hope to see more of them in the future. But I feel bad for the kids that won't be allowed to see this, and even worse for the ones that do and have nightmares.

That being said the movie is incredible and I'm still reeling from having seen it. Also, much like Moana, i love that Disney is now not requiring female heroines to "kiss the guy" or necessarily have an interest. Strong and brave young women can be just that, they don't need a Prince Charming to be necessarily complete.

Brain rating: 4 stars (stop taking me out of the movie by over-relying on special effects!)