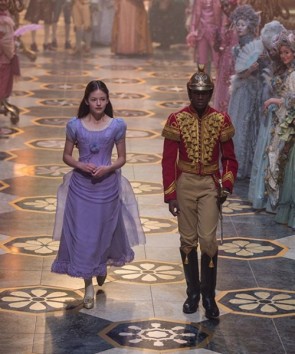 My mom took my daughter to see The Nutcracker once as a ballet in Western Florida. I'm glad I got out of that as I had seen it in Grade 3 when I used to live in Winnipeg. I can still remember how bored I was, not having yet learned that you can just sleep through things if you want to.

So I thought that if I proactively take Emily to see this movie, I might be able to dodge having to see the ballet if it rolls into town again. In the end, I think the ballet was likely better than this movie.

It starts off as a full-blown rip of Lion, Witch and the Wardrobe (which sadly some of you know better as Chronicles of Narnia). Keira Knightley is an absolute disaster as the sugarplum fairy. I don't know who green-lit her choice of voice for this character but it's beyond irritating. It actually makes me really appreciate Elizabeth Banks in Hunger Games, since that annoying character actually had a ton of depth.

The whole middle of the movie is actually pretty decent. Mackenzie Foy is really good as heroine Clara. But the father couldn’t be any more dull. Also, I really don't like a kids' movie that shows that a dead mother had a clear favourite of her three children. Kids shouldn't ever suspect something like that. Good thing my Emily is an only child.

I usually am not one to notice bad editing but it is GLARING here. You will have two characters walking down a hallway having an on-going conversation and it will cut to shots of the continued conversation going on, while the postures have drastically changed from one micro-second to the next. This stuff is beyond noticeable and I don't know why it doesn't get picked up.

I won't even get into the whole final act which is SO corny that it saps all sentimentality from the film. I thought it was obvious foreshadowing with the clock-on-the-wall that we were going to get a parting shot of the characters from the four realms looking down at Clara with her family but... no. Opportunity MISSED.

Also, I don't understand why there is zero coverage on Jayden Fowora-Knight's performance as Captain Philip. His horse, Jingles, played by Prince (the horse) has a more prominent screen credit in the film. Fowora-Knight quite certainly has the best performance in the movie and really glues many of the scenes together. Clara is not complete or frankly very interesting without him in the scenes. Yet, there is zero mention of the actor or character in any of the write-ups and media coverage for this movie. I don't understand it and I don't think I want to understand it.

Very pretty movie to look at though, I thought the Fourth Realm was brilliantly shot and designed. Pro-tip: when the only ballet sequence starts up, that's a good time to get a little shut-eye.

People are saying the Mouse King is a little too scary for young kids but I don't think so. it's clearly just a bunch of mice. My daughter was pointing to the Halloween poster on the way out asking if we could see that next, so perhaps I'm biased cuz I have a tough little girl.

Hey, at least we got to see a trailer for Dumbo. Can't WAIT.