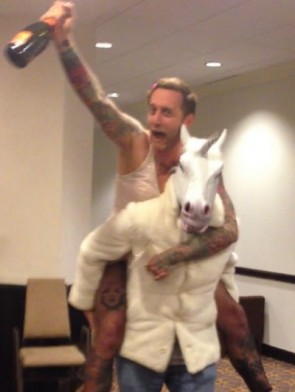 Pretty Pretty Princess and the power of friends.

Another ConnCon has come and gone and once again my biggest take away is how stoked I am that I have so many awesome friends. I know it sounds like I'm not so stealthily complimenting myself, and I do agree that I'm a fucking great time, but really what this is all about is the power of community. Thanks to Fortress:AT I've met some of my best friends and had countless amazing experiences. I've gotten to hang out and game with some awesome people from all over the world, and also discovered some rad people that happen to live pretty close. I've slept on their couches, drank their beer and met their kids. And for every single one of them, even if we all quit gaming, I'd still want to come hang out. That's pretty fucking impressive for a goofy little website where we argue about the relative merits of kids games or who's the hottest Archie character.

A few weeks ago when I posted about all the bullshit I've been dealing with thanks to homophobic bosses, I was deeply touched by the outpouring of support. People weren't just saying nice things either,(though every kind word truly meant a lot), people were wildly overpaying me for shitty games and in some cases just sending me money straight up in exchange for a promise to get a drink together someday. A dude who I have a long history of  some heated internet drama with, came out of the woodwork to reach out to let me know he thought it was bullshit and that he hopes I'm doing well. Last week I got a unexpected box from Amazon that contained the Netrunner base game, something I'd been pining for but couldn't justify buying at the present time. Much more importantly it came with a note saying to always remember I have friends who care about me. I posted it on the wall, after I finished tearing up. The original ass clown is a hell of a dude!

Stepping back, I can hardly believe how much F:AT has changed my life for the better. The last few ConnCons have continued to grow this feeling for me and this year was the best yet. I laughed more in the last few days than I did in the last few months. With a few sorely missed exceptions, ConnCon brings together most of my favorite people in gaming, featuring not just notable Fatties but also a good collection of semi-local gaming/drinking luminaries who I like hanging out with but generally play terrible games. This year we sadly had no Billy Z as he was still waiting in line for a prescription thanks to the glories of “socialized medicine” and couldn't make it and Steve Avery was out since the TSA thought his horse hat was a bomb and took away his suitcase full of coconut rum.

B Styles stepped up his game though and headed to the Loter Love Den on Wednesday afternoon to begin our gaming adventures nice and early. We played a bunch of stuff including a wild stalemate in Mage Wars before being joined by Trish & The Boy. The rest of the day is a blur of sea monsters eating helpless islanders, raging battles throughout Tokyo and hitting The Boy with crushing anti-dexterity spells.

Thursday it was time to rally the bulk of our core gaming party unit in Stamford and we ended up playing a solid game of TI3 once we got everyone collected from train stations and hotels. Jeff Luce got his ass kicked, I got executed and Will Kenyon lost, so it was pretty much perfect. We also had fantastic pizza.

On Friday the convention proper started so we continued to play a bunch of great games with even more awesome people. We had Fattie extraordinaire Geoff Engelstein not only run us through Space Cadets (which was a lot of fun) but also show us his new prototype for Warp Duels. It's a real time space combat game based around rapid dice rolling and it's fucking fantastic. It's hectic bordering on madness and all told I think I played 3 times throughout the day. It should be out by GenCon and I can't wait. I had my best game of Imperial 2030 ever, where I not only scored well, but far more importantly did so primarily by fucking Josh Look out of the Russian empire he had built just before he had a chance to cash in. It's quickly becoming one of my favorite games of all time. Another highlight of the day was a killer game of Shadow Hunters where I correctly guessed that Jay was the little girl Allie on the second turn with zero clues and we all murdered the fuck out of Daniel giving John the win in a glorious fashion. Also, did you know that Red Stripe beer is brewed in PA? What a bunch of bullshit, I'll stick to kosher plum brandy in the future.

This year I actually signed up to play in an event I wasn't running and I had a grand time playing in the Netrunner tournament. It was a little smaller than expected but I still got to crush Jeff along with some stranger dangers to make it into the final. It was a really weird game and we barely finished the first half in the time allotted for the whole final. I decided in the middle that since I was keeping pace already unintentionally, I might as well make it an official rule that for every brain damage I took I had to drink a beer. I finished with 4 brain damage... then I lost 7-5, but it was a ton of fun and I'm really happy that everyone I played with was serious about the game but really laid back about all the annoying bullshit you can run into in tournament settings.

Finally it was time for the main event of the con for me: Pretty Pretty Princess. Last year as a debut tournament it was the best attended single event at the con but I was really concerned that it was a fluke with mostly people who just wanted to see it once and wouldn't return. Boy was I wrong. I ended up having to turn down a bunch more potential players as we pretty much sold out in preregistrations. Next year I'll have a bunch more copies of the game cause I really want everyone to be able to play. Things kicked off with King Fralish Flim Flam marching around the area making proclamations  This year I had done up some more custom rules, the most important being that every time you landed on the black ring you were taking a tequila shot. I also upped the presentation...

Fun fact: I'm riding Cocktavian. Ban me now motherfucker! After an initial round, we were left with four finalists; Lady Mindy (booo girls!), Sir Peter of Putnam, Imperial Zev and Duke Some Other Guy. Each finalist was also served by a handmaiden who was responsible for putting on all their jewelry for them. It was hard fought, but in the end Sir Peter of Putnam was deemed victorious. He then went on to win a Tootsie look-a-like contest. Capping off the night we crushed our previous taco record, mostly cause I was so hammered I was having trouble with math, but we ended up with 72 tacos. Since I didn't want to be on the hook for like 30 extra tacos, my final game of the evening was Merchant of Tacos where I strolled around the hotel trying to sell my tacos to random guests in the bar and lobby.

Sunday we played some more games, ate more burgers and pizza and said our goodbyes. Sitting down to write this I'm realizing my memories are far stronger when I think about conversations and jokes and general hang outs than when I think about what games I played. The community that has been built up around this place has long ago transcended gaming. And I wouldn't have it any other way, thanks for being awesome!

All regestered members may submit content to our site.
If you are interested in joining our team or becoming an associate or affiliate, please message us by clicking on the the red message icon below.
Discuss this article
Log in to comment
Posts in discussion: ConnCon Wrap Up & a Digital “Backrub” for F:AT