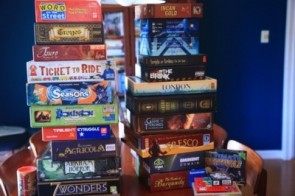 It was just over nine years ago that my friend introduced me to The Settlers of Catan. As much as any game I’ve played, it was love at first sight, a revelation, an experience like nothing I had before. Strategy, interaction, and wonderful times with my friends all in a one-hour game. I bought a copy, played it to death, and got most of my friends hooked. I assumed that was the end of it, and I never bothered to look further into the hobby.

Several years later, I moved out of my parents’ house in Michigan and made the trek out west to Kansas City. I quickly made some friends here, ones who also enjoyed Catan as much as I did. But by this time I had played close to 100 games, and it just wasn’t as thrilling as it used to be. I liked it alright, but it was no longer my first choice of pastime when I had the opportunity. But then someone introduced me to everything beyond Catan. I was dimly aware of obscure games besides my favorite, but being a poor college student I didn’t bother myself with them. Now I was pulling in a paycheck, and I had the money to spend on new games. I don’t exactly remember the first new game I bought when I truly entered the hobby, but I think it was either Bang! or Thurn and Taxis.

At this point, a lot of gamers know the script. The early days of the hobby are heady ones indeed. I did everything that new gamers do. I listened to all the podcasts. I spent inordinate amounts of time on Boardgame Geek. I drove out to the game store for fun, and it was rare that I walked away without something new. Eventually I started attending the Thursday night game night hosted by my local store, and I made a huge new group of gamer friends with whom I could share the hobby. It sounds ridiculous to anyone who hasn’t experienced this, but it was a rush. There was simply no other way to describe it. Board gaming felt limitless, like something I could explore for the rest of my life.

The only problem was that I felt like I was getting in a rut. Up until this point I had focused on Eurogames, mostly because that was the most popular genre at BGG. I enjoyed them plenty, but they had their limits. I realized after playing a new purchase that I already owned something very similar, and that while whatever it was might have been incrementally better, it was obvious that board games were not as unfettered as I had previously thought. It was around this time that I started drifting over to Fortress: Ameritrash. I came around through some article, but I stuck around when I discovered the surprisingly frank discoure going on about the hobby. I didn’t agree with a lot of it, but I was fascinated to learn more about thematic games where luck was embraced rather than avoided, and where it was okay for a game to go longer that 90 minutes. I dipped my toes into that water gently with Cosmic Encounter and Battlestar Galactica, but soon I was totally over the deep end.

The great myth of Ameritrash is that it is about luck and theme. That may be true for a lot of people, but it’s not really the case for me. What I really like is the emotional hit I get from the genre. Theme and luck might facilitate that, but they aren’t the end goal. I was finally engaging the part of gaming that felt like “play,” and it felt wonderful. Slowly the number of Euros in my collection dwindled as I traded them away for classics like Talisman and Dungeonquest.

Of course, the problem with emotions is that they come and go. At some point I realized that even though my newfound community was a better fit for me, I wasn’t really getting the same buzz I got from my early days of Tales of the Arabian Nights and Battlestar Galactica. I still loved those games, but they just didn’t spark the same passion they used to. Besides that, by this time I was no longer a single guy who could spend money on whatever game. Now I was married with two kids, and games no longer felt like an expenditure I could justify very often.

It was then that I gazed at my shelf of games, and everything about board gaming felt strangely hollow. I had spent years trying to recapture that initial elation of The Settlers of Catan, that feeling that anything was possible. Everything felt so new and so fresh. It was just so…intense. I wanted those thrills again, and I started to question every purchase I had made, every trade I had shipped off to someone across the country. Were all of these transactions an attempt to get a game that would give me that feeling of elation? Because there’s a word for someone who keeps on trying to capture that high, and finds that more and more is required to do so: an addict.

After a lot of soul-searching, I’ve come to the conclusion that I didn’t make those trades and purchases just to chase a buzz. At least, I didn’t make ALL of those purchases that way. It’s tempting to throw out the baby with the bathwater and just say “no more games!” I honestly don’t think I could do that, because part of the fun of the hobby is experiencing something new, even if you weren’t the one to buy it. I also don’t think buying a lot of games is the problem, since any hobby is by definition frivolity. No, the problem wasn’t that I had accumulated a ton of games. It’s that I spent more time than I care to admit trying to figure out what the next step was, how I could find a way to recapture that first experience.

Every gamer will eventually have to decide why they’re in this hobby. It’s necessary to find something that makes gaming a joyful pursuit in the first place. For the longest time, I thought it was about capturing a feeling. I had to get back there. But in the last year or so I’ve longed to dig into my favorite games again, the Cosmic Encounters and Talismans, the ones that actually make me feel happy. That sounds like I’m still chasing a feeling. The difference is, I now understand that whatever happiness they generate won’t and can’t last. Games will let me down eventually, and I’ve had to learn that there is limits to what they can accomplish. They can’t be what gives my life meaning, because they just don’t have that ability. But at least I’m getting better at figuring out what they can do, and why they’re still worth my time.

Image by user Fran_Kubelik on Boardgamegeek.com