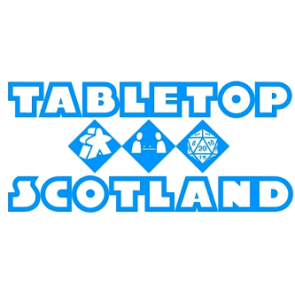 Tabletop Scotland is one of the newest conventions on the UK gaming scene but is growing into one of the best events in the country.

Arriving on the convention scene in 2018, Tabletop Scotland was extremely impressive for a first time con: loads of different gaming activities, large library, rpgs, gateway zone, seminars and more besides. I'd contributed the Playtest Zone to the event that year and headed back this year to do the same. On top of that Jamie was going to be assisting the Unlucky Frog, who were continuing their role as official media partner. The Sunday would also see Jamie and I hitting the floor to interview folk and I had a seminar to host on the Saturday night. It was a busy weekend for us and test of whether the Tabletop Scotland team could pull off that difficult second album.

I headed up early Friday (many thanks to Anton for my lift!). I wanted to help out more with setting up the con this year so the first few hours of my con experience saw myself and a chap called Gordon shifting more chairs and tables than is entirely reasonable. The chair god was pleased by our efforts.

I spent the remainder of the day helping out some of the retailers who were arriving and generally making myself as useful as possible. Jamie and the Unlucky Frog Team turned up early evening to do some audio setup work.

The con was now in both halls of the Dewar's centre, having attracted more exhibitors, retailers and events over last year. It was great to see the con comfortably taking up the space and I hoped that it would be reflected in the attendance.

The Playtest Zone was only taking place on one day this year, but with more designers than last year and in a bigger space. Most of the organisation for the zone is in the run up to the convention, and my actual duties on the day mostly involved getting members of the public to come and sit down and try out some fresh new games hot out of the idea oven. I always have a great time meeting new designers who have such a wide variety of ideas about games and game design. Full tables and happy players meant that it was job done as far as I was concerned. Thanks so much to all the designers who put their trust in me to organise this.

Jamie was also busy sorting out seminars with the Unlucky Frog and they all did stirling work in recording and organising those. Come the Saturday evening it was my turn to be recorded as I sat on a panel with esteemed artists Ralph Horsley, Andy Hepworth and Jon Hodsgon to pick their brains about Tabletop Art. This was the first time I had hosted a seminar and I felt it went really well. I may have volunteered to do more next year (damn you Mr. Wright) so hopefully I'll be back in the hosting chair in 2020.

After the seminar I was footloose and fancy free, so joined in with a game of the social deduction game Blood on the Clocktower. This took place in a secluded locker room which I was fairly convinced would have made an excellent murder scene should someone wanted to have wiped out a large number of gaming media types.  Blood on the Clocktower is a werewolf style social deduction game where one person has been murdered at the start, they are the GM of the game so to speak, and the rest of us must either find the demon that did it or get away with murder depending on the side we are on. It was brilliantly hosted by Efka from No Pun Included. It was a great experience that I really enjoyed but I think the game might not be for me. More on that when I've solidified my thoughts a little more (maybe in a first thoughts post).

Definitely not getting to get murdered here[/caption]

The night was rounded off by popping up to the pub quiz to spend time chatting with the crew from Decking Awesome Games the Lucky Sparrow Gaming Cafe and many others. It was a great day and I was looking forward to more on day 2!

Jamie and I hit the floor early, well Jamie a little later than me lazy sod that he is, and spent the morning and early afternoon interviewing the folk around the show floor. We had a great time talking to the main sponsors, various retailers and friends of the show. Everyone seemed to be having a good time and the con felt buzzing.

I must admit I have not done much of that sort of interview before and that is something that definitely comes through in the recording (I speak to fast when nervous). Despite that I really enjoyed the experience and it has definitely given me the confidence to do more of that in the future.

During the day on Sunday we actually managed to play some games! Whilst touring the halls we sat down to play Little, not Tiny, Town, the new game from Iello. This was a charming worker placement game with some engine building that I enjoyed but couldn't really see adding to the collection.

We also managed to hit up the Battleboar Games stall to play Arcane Blaster Casters, which if nothing else certainly had an awesome name! Thankfully that is not where the attraction ended and we had a great time hurling weird spells at each other often with ridiculous names:

After our duties had ended we rolled up to the back of one of the halls and played Second Chance with Chris & Lindsay from Behind the Box, Kenny from Dice Roll Cafe and Ross from Moregamesplease. Second Chance was a polyonimo roll & write that I enjoyed, but has that same problem that must euros have: no player interaction. As a way to chill out though, it has to be said it was pretty good.

Once the Unlucky Frog had packed up, they joined myself and Jamie for a game of Tortuga a piratical themed game of treasure and betrayal. This has a base of social deduction but with a bit more mechanical structure than Blood on the Clocktower. I really enjoyed it and the presentation of these games is absolutely gorgeous. Pretty sure this one is going to end up in my collection.

Keep on Rolling on

Tabletop Scotland was a great success for me, for The Giant Brain and for the team behind the con. They've just released numbers and they were up 54% on last year which is a fantastic achievement. For only their second year the con already feels like a staple of the gaming calendar and I can only imagine that it is going to continue to grow in years to come.

I'd like to thank everyone that spoke to myself and Jamie, all the organisers and volunteers that made the con what it was and friends old and new that we saw/met over the course of the con. I and The Giant Brain will continue to support Tabletop Scotland in any way we can and I can't wait till next year!

Discuss this article
Log in to comment
Posts in discussion: Tabletop Scotland 2019 - Wot The Giant Brain did