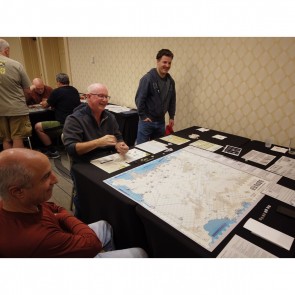 Compass Games Expo is a wargamer’s convention. Wargaming as a hobby really benefits from conventions, because most wargames are lengthy and therefore hard to play at a weekly game night. A convention like the Expo gives players an opportunity to play some of the longer games. Conventions also facilitate multi-player wargames, which have the dual challenge of length and coordinating schedules among interested players. You’ll find a few Euros or other fare being played—Compass even publishes some non-wargames—but the vast majority of tables are covered with maps of varying sizes and scales, along with associated cardboard counters and chits (or, increasingly, wooden bits). Many of the tables have three to six players gathered around them, taking advantage of the opportunity to play wargames in which negotiating alliances (or breaking them) is as important as strategy and tactics. If you are looking for a chance to get your Monster Games on the table, Compass Games Expo is here for you.

The Expo is open to games of all makes and models, not limited to Compass Games. I saw, or played in, games from several other publishers. I noticed the Compass games Bitter Woods, Korea: Fire and Ice, War for the Union, and No Peace without Spain in progress as I walked around the rooms. Games by other publishers included Cataclysm, Fire in the Lake, Here I Stand, and Dark Sands from GMT, and Great War Commander from Hexasim. There were also numerous playtests in progress, as well as designers pitching games to Compass. Several Compass designers are on hand to demo/teach their games, including Greg Smith showing off games in his solitaire Aces series (Interceptor Ace and the forthcoming Western Front Ace), Adam Starkweather teaching Korea: Fire and Ice and his Company Scale System, and Rob Beyma with War for the Union. The Expo also hosts a couple of mini-tournaments, including one for Bitter Woods, along with other planned events. 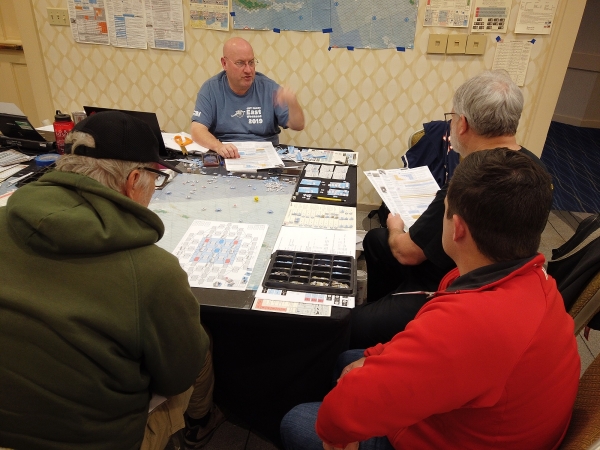 As a player, you have multiple options for finding a game. I tend to pre-arrange games with friends. Compass also provides a match-up tool on their web site, as well as a listing for the planned events. People also set up the games they want to play, along with a sign advertising openings.

The Red Lion is an excellent venue for gaming. We had access to two spacious rooms, “Nutmeg” and “Crown”, each with enough tables to create a gaming space of any required size, along with plenty of chairs. The gaming rooms were comfortable and generally well lit. The Compass staff is present throughout the Expo, and they are friendly, welcoming, and well organized. John Kranz of Compass also organizes the larger ConsimWorld Expo, and the experience shows. 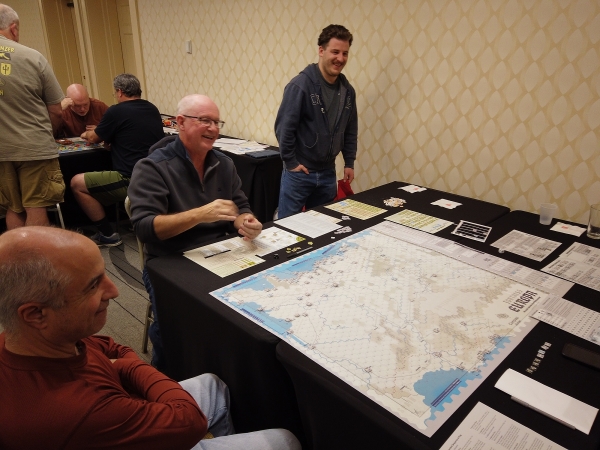 Mike Metcalf (center) getting ready to conduct the initial Allied invasion in FORTRESS EUROPA with Billy Thomas (Compass Games) looking on behind him.

The cost is also reasonable--$45 for the full, four-day weekend. (There were only a few games in progress on Monday, though. Most people left sometime Sunday.) The group rate for single rooms is $121 per day, doubles $138 per day, and the parking is free. The Expo is bring-your-own food and drink for the most part, though there were sufficient water coolers in both rooms, and Compass generously provided pizza for all on Saturday evening. The hotel has a restaurant, and there are several diners and fast-food places within a few blocks. I can’t speak to the quality of the rooms or the hotel food, as I am lucky enough to live within 20 minutes of the Expo and did not stay onsite. However, I guarantee they are superior to certain other convention sites best forgotten. I did hear grumbling about the pool being out of order.

One highlight of the Expo is the Compass Games sale. For the first two years, Compass has brought copies of every in-stock game and magazine they have, selling them at 50% off. It’s not just a few copies, either. Compass is Connecticut-based, so if a game sells out at the Expo, they bring more in from the warehouse. As someone who regularly pre-orders games, I only bought one: A Pragmatic War: The War of the Austrian Succession 1741 – 1748. I would have bought the third edition of Hearts and Minds, but it sold out not only at the Expo, but of all the warehouse copies as well. Fortunately, Compass plans a reprint. Several attendees were spotted carrying stacks of Compass Games around.

One thing I noticed is that there was no breakout release at the Expo this year. Last year, Europe in Turmoil seemed to be everywhere, either on the table or in purchasers’ hands. Nothing stood out the same way this year, although I’m sure Compass knows exactly what sold.

The Expo also hosts a flea market for your used games. It’s a loose affair, with a few tables set up at the back of the room. You bring your games, fill out a price sheet (which includes your phone number), and leave the games for attendees’ perusal. Not everything sells, but sellers who put bargain prices on their wares seem to do a brisk business. I sold about two-thirds of the games I offered, in part by lowering the prices a little each day until they attracted a buyer. 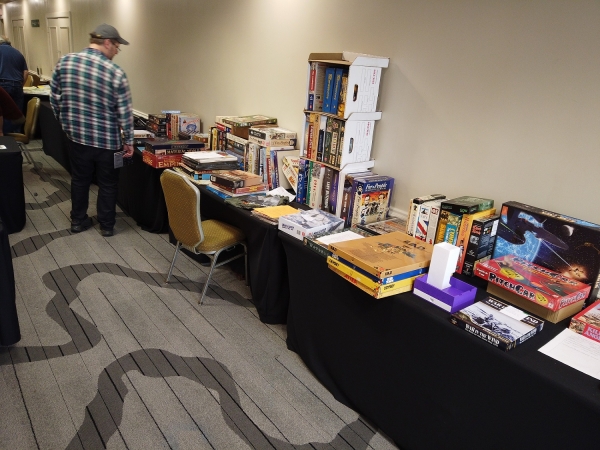 Part of the flea market at Compass Games Expo.

Next Veterans Day weekend, wargamers should add Compass Games Expo to their schedules if they can. It is a relatively inexpensive convention. It is well organized, full of friendly gamers, and a long weekend of wargaming fun.

This does sound like a fun time, though. You are absolutely right that wargaming needs events like this since some of the games are so long and complex.
Read More...