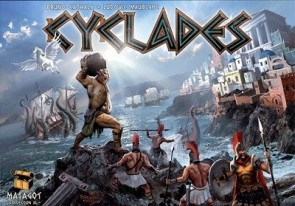 This is an email interview with Bruno Cathala where he shares his thoughts on Cyclades, the Hades expansion and gives us a few hints about the second expansion for the game.

Bruno Cathala is the designer of one of my absolute favourite board games that has seen more table hours than any of my others: Cyclades! The cards in the game that doesnt get used much had to be sleeved because they started show wear. After about 40 sessions with the game an idea got planted: I wanted to know more about the mind behind the game and what he thought about it. This is that idea in full bloom, an e-mail interview with Mr. Cathala. Enjoy!

Where did you start with the game? Was the theme of the game there from the start or did theme come later in the process?

- Well, Cyclades was born from a mix of two ideas after a lot of discussion with co-designer Ludovic Maublanc.

The first idea was a thematic one: We wanted to build something around Gods from mythology and ancient Greece was ideal for that.

The second idea was mechanical: We wanted to build something in which if you absolutely want to do something, you have to pay a lot to do that...but the effect wouldnt be so powerfull because the effect would be dependant on how much money you had left.

The mix of these two ideas gave us the first "stones" to build Cyclades.

How was it playtesting the game?

- It was exciting for sure and it was easy because our playtesters loved the prototype so much that it was not difficult to ask them for new testing sessions.

One more question on playtesting: Did you use different amount of players during testing?

- For sure! A game has to be playtested in all configurations so we tested from 2 to 5 players.

How did you decide the different setups on the map?

- All players had to get 2 gold with the initial placement and we choose a setup avoiding too many aggressive situations.

Did you remove any element of the game before release?

- We wanted to stay as simple as possible from the very beginning, so we had to cancel some ideas that was not usefull enough or was too heavy on the rules side. We didnt remove anything just before the games release, for example everything you see in the Hades expansion was made from scratch and just based off the base game.

Do you have a few examples of what you removed from the base game?

- I dont, they where minor. A couple of small, unuseful things. The guideline was that if we had to write more than 10 lines of rules for something which would only be interesting in half of the games there was no sense in keeping it.

What part of the game do you personaly like the best about cyclades?

- The artwork! I'm sure the game wouldnt have been such a big success without that! I'd like to send a big THANK YOU to Miguel Coimbra for his fantastic work on the illustrations!

The artwork is indeed great, I love the nice borders, the iconography and the map! Is there something you dont like about Cyclades?

- Yeah and that is related to the artwork too: There is only one picture I absolutely dont like: The priests! For me they look more like native american shamans than Greek priests. But frankly speaking, its just a minor issue.

- Yeah, the Cerbere from the Hades expansion and the Kraken for sure, seeing a Kraken out on the board is always nice.

Cyclades is in the top 100 games list on Boardgame Geek which is a very good achivement in my eyes. How important is this to you as a designer?

- Its a big reward to have your game in the top 100 list! For us its the clue that our design worked for a lot of players.

Are you reading forums discusing Cyclades and the different strategies in the game?

- Yes, I'm checking BGG, Spielbox and TricTrac forums every day to see if there is some things to answer. This is true for all my games, not only Cyclades. But this presence is mainly visible just after the release of each game. Later, there is experienced players answering questions with correct answers before me so I have nothing to add.

Have you read something that someone has written about Cyclades that has been memorable?

- The Most memorable for me is to have messages in your mailbox comming from all around the world just to say that they enjoyed playing Cyclades! One Greek player, living in the Cyclades was so happy with the game that he absolutely want me to to meet his play group if I ever made a trip there!

When was the last time you played Cyclades (excluding playtesting the upcoming expansion)?

- I played the basic game a hundred times so for my own personal pleasure I only play the game with the Hades expansion. I play without the expansion at conventions when I'm teaching the game to new players. Last time I played was during Gencon in Indianapolis in 2012.

Are you good at playing the game? :)

Is there anything strategy-wise you feel is needed to know before playing your first game?

- I think that new players just need to remember this sentence: Money gives you the keys to war.

My thoughts exactly, its very important to build up a stable economy. What do you feel the Hades expansion gave us that make the base game better?

- We made our best effort with the basic Cyclades, a good accessible game for a wide category of players. With the Hades expansion we focused on the core gamer by bringing a lot of new strategies and rules to master for them.

Whats your favourite part of the Hades expansion?

- My favourite part is Hades himself that gives you ships and to move around armies. Also to steal gold with Cerbere.

Are you working on a second expansion?

- Yes we are! New board, a sixth player and the possibility to play in teams. Its the same goods but balanced differently. We still need to work a lot on the fine tuning and play testing, but we enjoy playing in this new way.

That sounds exciting! Do you have an estimate on when we can expect it?

- We still have to finish development, production and making new miniatures so it will take some time. It will not be available until 2014.

Is the next expansion going to be compatible with the Hades expansion or just the base game?

At this time, we have only playtested it with the base game. In my opinion it should be okay with Hades from a pure technical point of view. But I fear that it would make it a little too rules heavy to be really pleasant to play.

A big thank you to Bruno Cathala for agreeing to this interview. Game on!