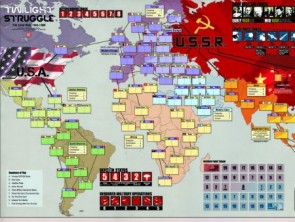 What's perhaps bigger news is that in amongst the interview tidbits I managed to glean there was some mechanical detail from Ananda Gupta about how some the new expansion material in the game is actually going to work. I left it out of the feature because it's primarily aimed at mobile gamers who've probably not heard of, let alone played, the base game before. But for the rarefied crowd here, I felt it might make an interesing scoop.

You'll want to read the feature first, so go do that, otherwise some of this won't make sense. Then, come back for a little more from Ananda with an example of how the What If expansion is going to work.

Soviets invade Manchuria and Korea in early 1945. Apply the 2-3 result. Then, move the US/Japan Mutual Defense Pact card to the Mid War deck and add 1 USSR influence in each of Japan and South Korea during setup.

Soviets declare war on Japan in August 1945. No effect.

Japan surrenders after Hiroshima bomb; Stalin reins in surrogates. Remove the Korean War card from the game. On turn 1, US ignores DEFCON restrictions and DEFCON cannot go below 2."

Ananda also gave me an infuriatingly incomplete teaser about the Stanislav Petrov card from the new promo cards. "His event text will add an interesting wrinkle to the DEFCON endgame and provide some neat interplay with Wargames," he said. And then, as if that wasn't elusive enough, he added "there are two other cards but we'll keep those secret for now!"

I also found out, a little disappointingly, that these new editions or expansions are unlikely to include any of the international promo cards like Anni di Piombo. My understanding is that they're not actually very good cards, but still, as a bit of an obsessive fan, the inability to get these in English, or even with the standard edition card back, is annoying. It hasn't totally been ruled out as a possible optional rule for the digital version though.

What else? Oh yeah, early Fall is the target for the beta release so we've got a little while to wait. I just really hope I see my physical copies of these new expansions a long way before then. So if you haven't already backed this kickstarter, hopefully this extra information is enough to convince you. It ends today, so if you've been on the fence, now might be a good time to get off it.