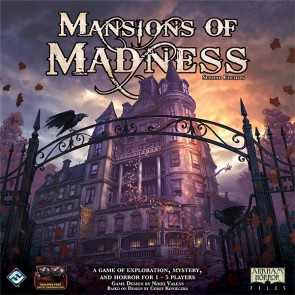 If you caught my Mansions of Madness review the other week, you'll have gathered I was both impressed and disappointed by the game. The experience of playing is unique, but it feels overpriced especially given limited replay value out of the box. All that, however, has the potential to change given where the game goes in the future.

On that basis I asked for, and got, the opportunity to chat to the designer Nikki Valens and Keith Hurley, VP of Media and Interactive at Fantasy Flight. I wanted to explore the game design, the motivation for pushing the app envelope and how it might be supported going forward.

The result was interesting enough to build a feature out of for GamesRadar, which was pretty cool. It's always nice to get the opportunity to talk about tabletop on more mainstream gaming sites. But there was enough interview material left over to make a worthwhile Q&A feature out of for more dedicated board gamers like you lovely people. So here it is, in a slightly edited format to make up for the stuff I cut for the feature.

Q: What gave you the idea to use an app to control Mansions of Madness Second Edition?

Nikki: The idea to use a companion application for Mansions of Madness Second Edition came about because we wanted to create a more immersive narrative experience than could be achieved with decks of cards alone. Another driving force, was to convert the system to one that could be played entirely cooperatively, in contrast to the one versus many gameplay of the first edition.

Q: What do you think the app does that a traditional board game could not do?

Nikki: The app integration allows us a handful of advantages over traditional analogue options—streamlined gameplay, narrative depth, and cooperative/solo play to name a few. From the first moments of setup, the companion app works to make Mansions of Madness Second Edition easier to play than most comparable games on the market.

A similar system could function in analogue but the companion app is able to manage all of the necessary factors instantaneously and without any intrusive card flipping. It all lends itself to creating a more immersive narrative experience for the players.

Plus, Mansions of Madness Second Edition is a fully cooperative game, something that was not possible with the purely analogue first edition. The companion app will naturally alter the timing and difficulty of many aspects of the game based on the number of players. In this way, the challenge a scenario presents will be appropriate for any number of players.

Keith: There are many advantages that an app can bring to a tabletop gaming experience. Each time players load a scenario, one its different variants is loaded and provides a different experience from what they likely played before. Additionally, a companion app allows us to add a sense of exploration to a purely cooperative play experience, rather than spoiling the entire layout of a scenario during setup.

Also, with a digital app we’re no longer required to have a physical component to provide additional content. In Road to Legend, for example, we were able to push out a completely free campaign to our players, which included a ton of story and side quest content, with a simple app update. It’s a really powerful way to get fantastic scenario content from our development team directly to players.

Q: Do you feel multimedia aspects of the app add much to the game?

Keith:  Absolutely. When you launch a scenario in Mansions of Madness or Road to Legend, we try hard to set the stage, whether you’re investigating a rash of disappearances in a sleepy coastal town or tracking down a mage in the depths of some long-forgotten dungeon.

Nikki: Aside from the companion app processing the more crunchy aspects of the game design, which would put off most players, the app allows for a much improved atmosphere. Beyond that, one aspect of the game has been removed entirely from the analogue and transplanted into the digital: puzzles. Similar puzzles existed in the previous edition, but the companion app streamlines this process by instantaneously preparing the puzzles for the player and detecting when a puzzle has been solved.

Q: Are you going to add new features to the app, as opposed to just new scenarios, with the upcoming expansions?

Nikki: In the first months after the release of the base game, we are focusing on increasing the amount of content available to players; that is, more scenarios using the existing set of features and mechanics available within the base game. But we are also looking forward. Players can expect to see new feature and mechanics in the not too distant future.

Q: Why might MoM make a good introduction to tabletop gaming for someone who primarily enjoys video games?

Nikki: Mansions of Madness Second Edition carries much of the narrative and mechanical depth that some video game players would expect without the immense amount of preparation or rules learning required for other similar tabletop games. The game and companion app do their best to remain intuitive and unobtrusive. Mansions is quick and easy to learn, probably more so than most modern video games, something that cannot be said for all tabletop games with as much mechanical depth as this one. A major bonus for many players is that the second edition can be played solo in the same way many video games can.

Although the inclusion of a companion app might be daunting to many tabletop game players, video game players are perhaps more accustomed to interfacing with a computer, tablet, or smart phone while playing games. And while the companion app handles much of the technical aspects of the game design, it leaves the interactive elements of a tabletop game in the hands of the players. This could be just what video game players need to get into tabletop gaming. Players are able to focus on playing the game without getting distracted by intrusive component manipulation or referencing rulebooks.

Video game players who play Mansions of Madness and enjoy it might be more likely to then invest more time learning other tabletop games and expanding their collections.

Q: Do you have any playtest examples or stories about the game creeping players out?

Nikki: The general atmosphere and mood created by the app is quite chilling. Our aim was to have every written detail work toward this unsettling atmosphere that slowly builds over the course of each scenario.

Rising Tide is a more investigative scenario with less action than some of the others, created and written by Kara Centell-Dunk, one of our scenario developers. The story slowly builds this atmosphere of tension and dread as you proceed in your investigation. The more time you spend in the foggy port town of Innsmouth, the more you feel the watchful eye of the watery eyed locals. Each night, you have fitful rest and unsettling dreams. The immersive writing and the atmospheric music provided gave me shivers every time we played through it.

Q: Did any of your favorite horror films/video games influence the design? Which ones and why?

Nikki: While no specific films or games inspired the design, the horror genre as a whole was a big influence. It was a goal from the beginning to create a game that could give players similar sensations of terror and dread as they would experience when watching a horror movie or playing a horror game. Though, that's not to say that we didn't sneak in some subtle homages to various films and games.

I'm a big fan of this game although I do agree, it has some flaws..

I'm a big fan of this game although I do agree, it has some flaws..

I've been playing it over this weekend (surprise, surprise) and it's just re-enforcing my original opinion. It's a unique and often brilliant game: possibly the most fun I've had with a co-op. But it desperately needs an ongoing source of new scenarios: cheap, through the app, without the need to invest in physical product. In less than ten plays I've beaten the first two scenarios and seen enough of the third for it to be predictable. The fourth needing 3-5 hours is just silly time, and won't ever get played. There's just not enough in the RNG to make replays of the same scenario interesting.