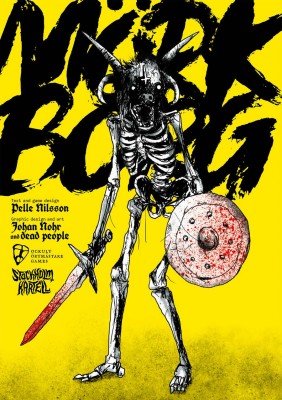 Game Name
MÖRK BORG
Designer
There Will Be Games

Recently, I had the pleasure to do an interview-based feature on the Old-School Renaissance in role-playing games for Dicebreaker. As part of it, I got to interview the designers of two of the biggest games in the movement, Old School Essentials and MÖRK BORG.

For the introduction to what we’re talking about, please go read the original piece. All the people I talked to were loquacious in their enthusiasm for these games, and I had a ton of great interview material to use. The best quotes made it into the feature but, due to time constraints, I had some leftover. Here they are, in Q&A format, for your enjoyment.

This time in the hotseat are the two minds behind MÖRK BORG, Pelle Nilsson and Johan Nohr.

TWBG: OSR games, in general, seem to be very fond of tables, especially random content for the GM. Why is this, and what do you think it adds to play?

Nohr: I like it because it keeps me on my toes even as a GM. I can’t plan or prep too much since the random tables might turn all those plans on their head. And it also adds a bit of objectivity and impartiality to the game, where I, as a GM, can make rulings and calls, but sometimes it’s all up to the dice even for me. How does this character react to the PCs barging into their chamber? Roll Reaction, they could see them as potential allies, or draw weapons. What happens when they drink the mysterious potion in the lab? Roll on the random table. Then you get to build off the results, together with the players. In MÖRK BORG we treat the entire game world this way with the Miseries which are world-altering events that are all randomly generated at the table. If you get a Misery and it happens to be the one where all the kings and queens suddenly die, that changes everything politically and creates giant power vacuums ready to be filled by other factions. If you get the one where the dead rise, now the game is a zombie apocalypse. There’s one which implies the largest metropolis in the world becomes “hollow” (exactly what that means is up to you), which could mean the city falls into a sinkhole or maybe the inhabitants turn into hollow husks of humans. What does that mean for the rest of your campaign? Stuff like that can create some really memorable moments.

Nilsson: For me, it is the elements of not having to prepare too much as a GM, and also the surprise for the GM stuff: I think it adds a lot to creativity/development processes for the GM as well, not leaning on 100 % ready-made events. For me, all this makes it more fun to play. Of course, a great amount of tables also makes it easier if you run out of imagination.

TWBG: We love the "miseries" system that puts a randomised time cap on the campaign: where did the idea for this come from, and what do you feel it adds to the game?

Nohr: The idea of an ending world came to us pretty late in the process. The game actually started out with the setting and world only hinted at in class abilities, items and monsters, and it wasn’t until quite far into development that we decided to add more lore, locations and factions. And even then it’s still very vague and open for interpretation. And then we decided to kill it.

I remember listening to a podcast about Nostradamus’ prophecies and got the idea of the Miseries and how interesting it would be to just completely doom this world, without any hope of saving it. A lot of games have world-ending events but there’s always some kind of post-apocalypse meaning that it wasn’t so bad after all. We wanted to see what would happen if you had an apocalypse where nothing remained afterwards.

TWBG: I hear you're a big DungeonQuest/Drakborgen fan. Do you think it's a good game to get people into the OSR mindset?

Nohr: I am a big fan of the original Drakborgen game from -85 and I do think there’s a lot of similarities with how you can play these types of dungeon-delving games. It’s very lethal and unforgiving, and the random nature of things like treasure, encounters and the entire dungeon layout makes every game unique and surprising for everyone involved, just like a lot of OSR games use randomly generated game content to keep you on your toes, including the GM.

There’s also this sense of danger and real challenge. In the original game manual, it says there’s only a 15% chance to survive; it’s like the game is saying to your face “yeah this is hard, you’ll most likely die, you sure you’re up for this?” It’s very upfront with what you’re in for, and dying is part of the game experience.

TWBG: I heard someone describe OSR by likening it to a video game: fast, lethal and if you die you just start over where you left off. Do you think that's a fair comparison?

Nohr: I haven’t thought of it that way but it does make some sense, and I myself draw a lot of inspiration from video games, especially roguelikes. Fast and loose, high risk, not too much attachment to your character and a lot of random generation. When we play, if your character does die, it’s not such a big deal since you can create another one in a few minutes, or seconds using our online app, and the GM will have your replacement character join the party some way or another in no time. We don’t spend too much thought on how or why this new person would join the group, we’re all here to have fun and everyone being able to participate and have a good time is way more important than some in-game narrative or logic.

Nilsson: I can understand the comparison with levels, fast deaths/fast character creation and dungeons with traps and monsters and so on, and the title MÖRK BORG, English for Dark Fortress, is actually inspired by the old Mac-game I played in the 80s: Dark Castle.

TWBG: Why does OSR reject some of the popular "common sense" house rules, like assigning numbers to stats after they’re rolled? What does the more RAW approach bring to the game?

Nohr: Not sure what you mean by common sense but there is a lot of house ruling and hacking in the genre that is, for me at least, fundamental to the whole playstyle. That you take whatever game you’ve got, or several of them, and hack/adapt it into something you’re all happy with at the table. But, the thing about randomly generated stat lines and character abilities, is that you get dealt a hand and have to make the best out of it. You can’t customize your character too much but have to make do with what the dice give you. I’ve also found it to be more creatively inspiring and challenging, making up a character concept after all the mechanical details are in place, rather than trying to recreate a preconceived character idea with the mechanics. Different strokes!

TWBG: I'm interested in how the idea of a referee as an impartial arbiter plays alongside trying to get away from dice in favour of real-world solutions. Do you feel that a GM is going to be fairer than rolling dice, especially if there's a disagreement with the players?

Nohr: I think fairness and impartiality are one aspect of it, but, speaking from my perspective, other important bits are the rule of cool and a “yes, but” mentality. If you want to encourage players to be creative and find other solutions than resorting to die rolling, you have to show that those ideas can work. That doesn’t have to mean you should allow every weird plan your players will produce, but you should be willing to give it a fighting chance or allow it with some sort of consequence. And involve the players in the ruling. “Sure you can scale the ice wall using your swords and axes but they will lose their effectiveness and possibly break? Let’s say the weapon damage is lowered by -1 and on a 1-in-6 it breaks? You good?” I rarely have any disagreement with the players but we’re all in on the mindset and all want to enjoy the game. And we’re all here working together at the player’s characters, not the players’ expense.