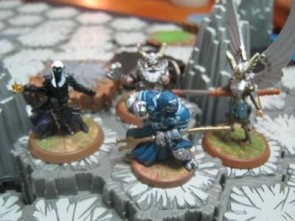 I have a review already written for tonight. It's pretty good, too, with plenty of crude, base humor and some truly tasteless nods to cultural insensitivity. I actually had it ready to post last night, and then something happened.

OK, that's not the end of the world. Hell, it's not that big a deal on any level. But it pissed me off, and now instead of writing lewd jokes about people I don't know, I'm going to rant loudly about game publishers with their collective heads jammed up their collective assholes.

For those of you who don't know yet, Wizards of the Coast has decided to alter the look and feel of the HeroScape bases. For five or six years now (I can't be bothered to check a calendar), HeroScape has had large, unique bases with a bevel. Now the bases are one inch across, and the bevel is gone. The reason we were given for this change is that Wizards wants to appeal to RPG fans who don't want to put those larger bases on their one-inch grid battlemaps. That's a really stupid reason, by the way.

Follow me here. For a very long time, we've had one size base. Now we have a base that doesn't even look like it belongs with the same game, which we're doing so that the miniatures will appeal to people who want to use them for D&D. Only at this point, the only miniatures being made are repurposed D&D minis, which means that the figures already exist, and they already have smaller bases. So Wizards has made a decision that will alienate and confuse thousands of HeroScape fans in order to appeal to D&D fans who are now able to buy a product that they could already get because Wizards made these once already.

They're counting on us wanting to play the game even if the new figures don't go with the old figures. Apparently they don't think the visual appeal is all that important to us. Apparently they forgot that the reason most of us picked up that first set is because it looked freaking awesome. If I didn't care about the visuals, I could play a game on a paper board with cardboard cutouts. It's not just about the game play - though it still has all the great game play that it always did. It just doesn't look right any more.

I could go on about this at length, but I think what I would like to do is bring up a broader point. Hopefully some game company big-wig is reading, so that they can get this relatively simple message. The message is in two parts. First, if it ain't broke, don't fix it. And second, listen to your fans.

Anyone else remember the Mutant Chronicles CMG? I would still love to find out who was the marketing genius (by which I mean dumb-ass) who decided to make those 54mm. Every other game uses 28mm figures, but FFG decides to release prepainted miniatures for a game with a huge, loyal user base, and make them all look twice normal size. Good luck using those with Warzone now, huh? And where is that game now? Yeah, the discount bin, because it died, because they tried to fix a miniature size that wasn't broken, and they didn't listen to the fans.

Another example would be Doomtown. I used to collect this Deadlands CCG like it was gold-plated. I had every card for the first two story arcs, even the promos. It won two Origins awards in 1998, one for best trading card game. It was a blast, and if you were a serious collector, you could get everything. But then it moved to Alderac, who messed with the distribution. This game was making money and selling like hotcakes, and suddenly you were paying more for more commons and fewer rares, and some cards were only available in Canada. Doomtown died so fast, the last set was a one-of-each-because-they're-already-printed special. It went down like a broken space shuttle, and now you could pick up whole sets of these cards for a fraction of what they used to cost.

I could keep going. Nearly every game company has made these stupid mistakes, especially the ones who specialize in expandable games. It seems like there comes a point when some executive up the chain decides that he wants to pad his annual bonus by screwing the fans and cutting himself a little bigger slice. That's the only possible explanation I can see, because the mistakes I'm talking about here are so obvious, so stupid, that any game nerd on the planet could have pointed them out. But greed throws blinders on the jackasses at the top of the food chain, and they start ignoring that basic, two-part message.

I have talked to several fans who are not too angry about the base change in HeroScape. Some of them are just kind of rolling with it. But I have yet to talk to one fan who thought this base change thing was a good idea. There were two basic principles here - they fixed something that wasn't broken, and they ignored their fans. That's the kind of stupidity that comes back to bite you in the ass, and in the case of the people making these idiotic decisions, could result in head injuries. Because, you know, their heads are up their asses. Yeah, it's not funny when I explain it.

It's not like this is a new trend for Wizards. They excel at fixing things that aren't broken, and they suck at listening to the fans. The fourth edition of D&D is widely reviled. I play D&D with my family, and although I have the books for 4e, we still play the old 3e stuff, because the new edition blows. Lots of competitors are stepping up to fill in the gaps, and Wizards is losing market share to a comparatively tiny competitor because they wanted to make everyone go buy new books.

But they're not alone. Nearly every company that gets too big for its britches makes this bone-headed mistake at some point, usually because decisions start getting made by people who are businessmen, not gamers. We could point to dozens of companies who have forgotten those two basic rules and cost themselves lots of money. If I have one goal with this post, it's to get someone in charge to go, 'Hellfire, maybe we should listen to the fans, and stop fixing things that aren't broken.' But I'm not optimistic, because greed hollers a lot louder than one pissant game reviewer in his cranky corner of the Internet.

I don't particularly care what people do about this base change thing. Buy more, don't buy more, sell your collection, or buy everything and convert the bases so it looks right. I don't care. I won't be buying any more HeroScape, because I want all my stuff to match, but I certainly don't care if every other gamer on the planet keeps picking up their plastic crack. But I'll tell you right now that they won't. Sales will take a digger on this one. Maybe Wizards can change back before they ruin the entire franchise, and maybe Joe Corporate will end up taking his golden parachute and leaving Wizards to wonder where they went wrong.

And if that happens (and that's what I think will happen), then I'll be able to get tons of HeroScape, really cheap. So it's a win-win... for me.

For the fans, not so much.