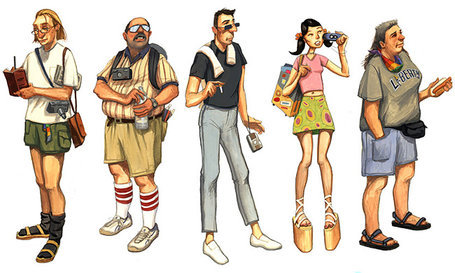 First off- I can't take credit for the term "gaming tourism."  I'm not sure if mrkurtb on the other site originated it,but that concept sure resonated with me.  Not that I'm a tourist, but it seemed to be a good way to divide a lot of people and their approach to games.

Among collectors, game reviewers, and people with more money than time, it's pretty common to have a large collection of games, but only enough time to play each once or twice.  If the game doesn't wow a "tourist" on his first play, or intrigue him enough to keep trying, he'll toss it in a math trade for some other hip new thing.  These are the guys responsible for the cult of the new.  They likely help keep a lot of companies in business and give many of us valuable info when a game first comes out.  Perhaps they'd stop looking at so many games if they eventually found their perfect game, but they also seem to love the hunt.

At the other end of the spectrum, you've got your gaming purists.  (Addicts didn't rhyme).  These aren't just your D&D enthusiasts, or your M:TG "Spikes."  These are also the Bobby Fischers, Michael Jordans, and 75-year-old Bridge players of the world.  For whatever reason, they're stuck on one game.  Maybe it's something that they and their friends mutually decided to do together.  Maybe the game itself is created with the intent to keep people paying and playing the same thing (see: World of Warcraft, Modern Warfare II, any "collectible" game).  Maybe it's something they're just particularly good at, and they enjoy testing their skills against other like-minded individuals.  Or maybe they just don't know what else is out there.  At the very least, these types occasionally write interesting strategy articles or help balance games which continue to be expanded or patched.

Perhaps this is just another way to frame the "hardcore v. casual" debate, which seems to come up with pretty much every moderately competitive game, or even cooperative ones with varying amounts of dedication such as MMORPG's.  Some people really get into stuff, and others don't.  But it's not the same as that.  There are people who have rated 2000 board games on BGG.  That number is astonishing.  If you ask most normal people to name board games, I'd doubt they could come up with more than 10 or 15 unless you gave them a lot of time.  I'd hardly call Tom Vasel a casual board gamer, even though he can't recite what all of the Heroscape units do from memory.

And here's where I think the distinction may become a useful tool.  When you read a review (or anything really) it's important to understand the bias of the author.  A gaming tourist might say, "I lost my first game and had a bad time.  Clearly the game is imbalanced for the other side, and it's expandable to boot.  I'm sure the future expansions will be just as poorly tested."  While the purist might say, well... nothing after their first play.  They'll analyze what they did wrong, and try again.  Or, they might immediately notice all the "flaws" that make that game different than their game of choice, and go back to playing that.  I've seen people say multiple times that "fanboy" review are less useful than other reviews, but is that true if you're looking for a new game to latch onto or have a limited budget?  Do people learn more from a negative review of the guy who played it once and dismissed it because it didn't do what he expected it to or he's a sore loser? As someone relatively new to all of these designer games, one of the things that bugs me when reading reviews from people with many, many games is all of the analogies.  If I haven't played the game you're referencing, that section of your review doesn't tell me anything.  And here you might see my bias coming through as well- I lean pretty far toward the purist.  I get really into one game at a time, and learn as much as I can about it.  In many cases, that intellectual pursuit is as fulfilling as watching those strategies unfold.

But really, there's a bit of both in all of us.  There are plenty of Agricola or Arkham Horror fans who will try almost anything, but keep coming back to their favorite game- they'll just have a much more tourist-y approach to games that don't fall directly in line with what they usually like.  A game outside of their comfort zone will have to really do something special to hold their attention.  In short, tourism is the act of searching for the next game to obsess over.  Some people are fine living in their small town, and some are nomads, but most are somewhere in between.

What's wrong with being a tourist? Having to check the rulebook a lot.  Or read it before the game, which turns what was going to be a casual fun evening into one slogging through often poorly designed manuals.  Even though tourists are often less concerned with winning, it can still be frustrating to be the guy with all the games, and not know them well enough yourself to actually improve your chances to win, and when you DO win, your friends might accuse you of mishandling the rules explanation. The endless search and passing on games might mean that you've played something wrong or that you might really like a certain game if you gave it another chance or two with the right group.

What are the pitfalls of being a purist?  Your friends will always tire of the game before you do.  It's inevitable.  I've seen it so many times.  I've a close friend who routinely owns 5-8x as many console games as I do.  He'll usually beat most of them (which might be odd for a tourist), but he just enjoys the different experiences.  Meanwhile, I'll be the guy that learns how to play DDR or Heroscape super well, to the point of it no longer being 'fun' for the rest.  At this point, you either have to quit playing that game, or find others who like to play it.  With the advent of online games and communities, this is a lot easier, but there's still a problem with some game's communities.  Playing with competitive strangers can really be unfun sometimes, even if you win.  Also, it just takes a lot of time, and there often should be "better" things to be doing with it. At worst, it's taking the crutch game concept and applying it on a personal level- the game becomes a way that you create your identity and interact with 'friends.' There's an inevitable burnout stage which can leave you wondering why you did what you did.  Kind of like an ex.  Also, there could be other games out there that you'd like better, if you only knew.

One psychological question that I wondered about in all of this is whether or not it correlates at all to personal relationships.  Is a married man more likely to be a mono-gaming purist as well?  Does the 35-year-old bachelor have 1800 games he has only played once?  If anything, according to my completely unscientific anecdotal research and observations, they're negatively correlated.  Married guys (and gals) seem less likely to stick to just one game.  They simply don't have the time or desire to devote to being the best at some arbitrary task like bringing someone's life from 20 to 0 in a card game, so they instead try to keep the variety high and just enjoy themselves.  Playing games is a vacation from the drudgery of taking muddy kids from practice and putting kitten-sweaters in the laundry.  It's more often the twelve to thirty-year-old single guys with more time than money who zero in on one game and take it seriously.  There are certainly cases of married folks doing well in competitive communities, or couples who play WoW together, but I can guarantee that one of the spouses likes the game more, and that the other is doing it just to help connect to their distant mate;  or at the very least, there's some jealousy present.

Eventually, we all have to decide what we're looking for in the games we play, how we play them, who we play them with, and the place they have in our lives.  Tourism, or purism?  Like many things perhaps moderation is best, but man, that's such a lame cop out answer.  For me at least, this question is more important than 'AT or Euro?'  I want to know if a game is one that I can buy once and play dozens of times, rather than stack on my shelf and appreciate for its 'clever auction mechanic' or 'unique twist on the dungeon-delving experience.'

Jexik is a member of Fortress: Ameritrash.

All regestered members may submit content to our site.
If you are interested in joining our team or becoming an associate or affiliate, please message us by clicking on the the red message icon below.
Discuss this article
Log in to comment
Posts in discussion: Game Tourists v. Game Purists