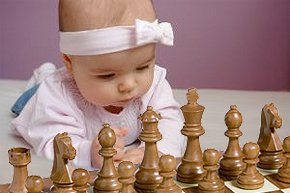 My four-year old daughter has always been tremendously curious about my games, so when she was old enough to start playing some of them I was obviously delighted to indulge her. Some of her favourites include Carcassonne, which we play without the Farmers rule, Castle Ravenloft, although I have to draw all the monster and event cards as they’re “too scary” and Pitchcar, a game at which she can quite legitimately beat me most of the time. However I’m sure you’ll be amazed to learn that her absolute top rated game is the 3-4 hour, 24-pages of rules epic War of the Ring from Fantasy Flight Games. She prefers it with the expansion mixed in of course, even though it adds complexity to the game. And what’s more it’s been a favourite since she was two years old.

You’ll have guessed I’m sure that I don’t have a freakish genius for a daughter. No, the reason that she likes War of the Ring so much is simply that for some reason the figures and the artwork on the board spark off big ideas in her imagination and she loves to play games with the pieces that have nothing to do with the rules and which involve inventing scenarios that would make Tolkein turn in his grave. I’ve seen Treebeard transform into a terrifying monster who battered down the doors of Helm’s Deep, the ringwraiths turn into fairies and cavort across the misty mountains and the Riders of Rohan visiting a fair at Minas Morgul, replete with merry-go-round and candyfloss. She doesn’t have the faintest idea how the game is supposed to be played and doesn’t care. Why should she? Much as I love the game, I suspect she’s having more fun with the board and pieces than I ever have sticking the rules like the tedious, hidebound old man I am.

What I find particularly interesting about this is that it’s the absolute antithesis of everything that a game hobbyist holds dear. Board games - and to a lesser extent other forms of hobby games - are totally defined by their rules. The rules are what give a game shape, provide strategic interest, make a game different from other games. Much as we may delight in having good quality, artistically attractive and well designed physical components for a game they are entirely secondary to the experience, almost to the point of irrelevance. I’ve seen a number of sets of popular abstracts such as Go and Draughts cobbled together out of found materials: sheets of card, discs of wood, black and white pebbles and the like. And ultimately the same holds true of something as overproduced as War of the Ring: I could put together my own set, if I wanted, using nothing more than some wooden cubes, several sheets of card and paper, and a few colours of paint or marker pens. The result totally wouldn’t be worth the effort, would look exceptionally ugly and would probably be illegal but the fact remains that if I created such a set and played with it, I’d be playing exactly the same game as people who were enjoying the Collectors Edition of the game that had cost them an arm and a leg. It’s the rules that define the game, not it’s components.

But a child sees none of this. All she cares about is that the board looks pretty and that there are horses and creatures with wings amongst the pieces. To her the game is more like a toolkit she can use to play games in her imagination. When I realised this, and started playing the much simpler games with her that she enjoys, it almost seemed criminal to start the process of teaching her to play by the rules and thereby begin chipping away at the foundations of that incredible imagination. What right did I have to tell her she’s supposed to play with this particular toy a certain way, and what evidence did I have that she’d have more fun if she did so? None. But nevertheless, as she grew older and started to understand these things, and got too big to see the play opportunities in plain components like plastic Draughtsmen (something my youngest can still do) I taught her, and we play together and have lots of fun. And there’s the key: by learning the rules we are having more fun together than we would playing an imaginative game with no rules. For adults and older children a game is, in a sense, a social toolkit in the way it’s an imaginative toolkit for the youngest. It offers a social framework where everyone, even people who don’t know or even don’t like each other very much can pass time together in a pleasant manner if they want to.

What’s ironic about this though is that many of the people who are the greatest victims of the imagination-replaced-by-procedure process are in fact the most vocal exponents of imaginative play for adults. Perhaps it’s because their imagination has so totally been replaced by flowcharts they loudly proclaim the benefits of grown men and women pretending to be knights, dragons, starship captains, cartoon characters and - all too often - boring mercantile types from the Renaissance period. I’m talking of course, about us, hobby gamers, and most certainly about myself. For all the years I’ve spent playing role-playing games I have trouble conjuring a mental picture of anything from all but the most inspiring prose, and even then it’s all too easily replaced by an image from a picture or a film related to the subject should I happen to see one. And I should certainly never think to pick up a game box, sift through the components and use my favourite ones to play an entirely different game of my own devising. I’ve moved on more to board games now but it’s always been my observation that often the most avid role-playing gamers are amongst the most social backward, unimaginative people I’ve ever met who will, in spite of their protestations about the imaginative value of their hobby, argue, cajole and sulk endlessly over the most minor points of rules interpretation instead of letting the group just get on with telling the story which is, ultimately, supposed to be the whole point of role-playing. I’m as guilty as the next gamer when it comes to this behaviour and the point at which I realised this was the point I started to move away from RPG’s and toward other kinds of hobby games.

I’m sure that to some extent the sort of inflexibility I’m talking about in this piece is an inevitable result of advancing years. After all it’s well remarked on that people generally become more conservative and more set in their ways as they get older. And of course, tactical and strategic sophistication has its own rewards to counterpoint the sheer imaginative delight that you may have lost along the way. But I think it’s a great shame that so many gamers have come to see deep strategic challenge as the be all and end all of playing games, dismissing more thematic or random styles of gaming as somehow childlike and unworthy of adult attention. The best path, surely, is to try and keep a foot in both worlds and maintain the adult and the child in all of us. I certainly hope no-one would be harsh enough to try and tell their kids that whatever play they invent is the “wrong” way to go about playing the game. Perhaps it’ll take watching a child playing with a game like it’s just another exciting toy to jar some gamers out of their notions of adult superiority and if it’s something you’ve never seen well, then I suggest you borrow a child from a relative, and give it a try!