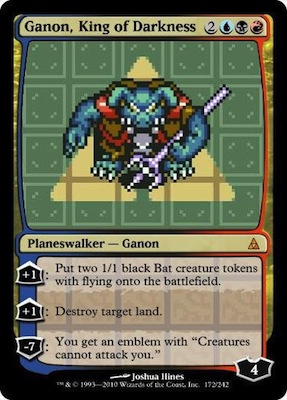 As I’ve written previously, this summer some friends and I started a “Magic: The Gathering” league, where we each buy the same number of boosters on a monthly basis and add them to our pool of cards. We then meet on a regular basis to run the decks against each other, and we play a lot on the side as well. The league is now in its third month, and has actually started to grow and become a bigger deal than I anticipated. So far official league play has consisted of two meetups where everyone plays everyone else, a booster draft, and various meetups where we just play casually. What started as a four-player league has grown to six or seven depending on the night, and that’s with one guy needing to drop out because he moved away.

I wasn’t there in 1993, during those insane early days of Magic. My experience has only been in the past three months. But in that time I’ve developed an inkling of why this game is as big as it is. It’s as addictive as they say, though not entirely in the way I expected. In spite of all I’ve heard, I don’t feel a constant desire to accumulate new cards. Indeed, I  feel like I’m only beginning to get a handle on the cards I already have. The addictive part has been the constant desire to monkey around with card combinations, the endless discussions on deck construction, and the desire to play our decks against each other. I’ve played a number of other collectible card games, but none of them have taken up residence like Magic. It’s become the background noise in the hobby, a way to kill a little time or a good excuse to get together and kill a couple hours of free time. Of course, that’s when it’s not a big event that eats up the entire evening.

Of course, one key difference between my Magic experience and my experience with other collectible games is that I have a dedicated group of friends who are generally available and willing to play on a semi-regular basis. I’ve discovered that requiring other people to own their own stuff and be willing to play is pretty much a requirement for any collectible game. It’s one weakness I’ve found with Fantasy Flight’s Living Card Games, in that one person can own all the cards. That sounds nice, but it has two negative effects for the way I play. First of all, it means you buy a lot more than you need to get a good experience. Magic has the not-unreasonable reputation of being a money pit, but it certainly doesn’t have to be. I’ve spent a fraction of what I’ve spent on the Star Wars LCG, for example, and I’ve gotten considerably more action out of Magic.

The “one-guy-owns-everything” method has an additional downside for me, and that’s that I don’t feel any particular sense of ownership when I’m playing with someone else’s cards. Of course, two people could buy the cards and play with the same card pools. That presents a different weakness though, which is that everyone has the same options available to them. A big reason why this Magic league has worked so well for me is that my card pool feels like mine, something that is unique to me. It has strengths and weaknesses that no other pool can claim, and that makes the game far more engaging.

That sense of ownership is what has resulted in the most rewarding experiences for me, when I see a plan come together and yield exciting results. One guy in our league is developing a reputation as something of a Wizard with deck-construction. He’s proven so adept that it’s becoming something of a league joke. For my own part I’ve had to blow up my initial green-blue color combination since it hadn’t yet won me a match, and shifted to a blue-black deck that I felt gave me a little more synchronicity. When I ran this deck against The Wizard, it proved surprisingly effective. I still lost (natch), but it was due to my own poor cardplay. Things like that yield lots of good learning and make me want to play more. The other super-exciting experience was in our draft, where I played blue-white. In one game I got way down in health, 34-2. I somehow managed to hold on, and I came back to win that game and the match. It was one of the more exhilarating game experiences I’ve ever had.

Our first couple of meetups involved Magic 2014, the most recent core set that came out this summer. This was clearly the right move with as many new players as we had, but it also felt a little like Magic 101, a way for us to get our feet wet before things really heated up. Magic players know that the real meat of the game hits when they start releasing cards from the expansion, which this year is the mythology-flavored Theros. Our first booster draft, held last week, used cards from Theros, and for me it was a revelation. There was suddenly more specificity to the game’s setting, and that specificity was reflected in the mechanics on the new cards. The sealed tournament we’re playing next year will stick with Theros, and all of those cards are being added to our pools. Suddenly it feels like the possibilities for construction have been blown wide open.

I’ve gotten a lot of different responses from people when I talk about our league. Some people fondly remember the days when they played, and a couple of those people have actually joined the league to keep enjoying the game in a more sane and cost-effective environment. Other people have given me some guff about it, owing to the game’s reputation as a money sink and our sudden obsession with a game that most board gamers left in 1998. But most surprising to me has been my own response, one that has grown into enthusiasm and excitement. It’s definitely addictive in the best way possible. It’s taking up the space that used to be taken up by lesser games.