What (Modern) Boardgame Have You Played the Most? 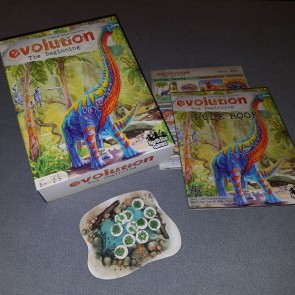 Sometimes, there is a difference between what game you have played the most and what is your favorite. Leaving out the classics board games such Monopoly, Poker, and Clue, that have decades long head starts on modern board games, I tried to narrow down what game I have played the most. Some games, like Coup, have the advantage of short play time and virtually no set-up. Others, like King of Tokyo or Magic, have been around long enough to fall into the modern classic category. Even taking those into account, the game I have played this most is Evolution: The Beginning.

Full Disclosure: I've played Evolution: The Beginning over a hundred times. It is my Autistic son’s absolute favorite game. Any game night starts with him smiling and saying “Evolution?” The fact that I can still play it and get any enjoyment out of it is a testament in and of itself.

Evolution: The Beginning is the streamlined, family friendly version of Evolution (which is currently on its 3rd Edition, so it has had a little streamlining of its own). It is a stand-alone version that supports 2 to 5 players and is NOT compatible with any other title in the Evolution line. I’m sure there is a joke about dead-end evolutions in there somewhere, but Darwin knows I’m not going to make it. The Beginning consists of a large deck of cards, a watering hole to which you add food tokens that represent the food. Each player is given a spiffy bag in which they collect food during each round which is tallied up at the end of the game to determine the winner (with allowances for how many cards you have in play but, generally, it’s all about the food). The cards are multipurpose, when they are played face up, they represent the traits of a species and if they are played face down, they represent the current population of said species or an entirely new species. As the game progresses, you are dealt more cards which you can use to add/swap traits, add population or create new species.

Each species is limited to a total of 3 traits. Many traits are defensive, protecting you from Carnivore species of other players. For Instance, a carnivore can’t devour a species with Flight if the predator doesn’t have same trait. Other traits, such a Long Neck and Fat Tissue enhance the way each species feeds from the watering hole or from the excess food. The key card in the deck that stops each species simply living in their own ecosystem is the Carnivore Card. When you add this Trait to a species, they can only eat meat a.k.a. other player’s species (or, while not optimum, some of your own species). This system has one glaring problem: you have to add a trait card to “become” a carnivore. You don’t have to add one to be an herbivore. So, if you add three defensive traits such as Speed, Nocturnal, and Burrowing to a species, congratulations! You just built the perfect beast that is immune to any predator, something Mother Nature hasn’t managed in a few million years. You may think it would take a perfect storm to get a perfect defensive combination but with only 10 different trait cards, it’s more of a lucky breeze. Oddly enough, this somehow doesn’t break the game. Instead, you find yourself living up to the namesake of the game, evolving when you need to, adapting to how much food is available in the watering hole, and going carnivore if the luck of the cards and lack of food dictates it. Maybe it shouldn’t work, but somehow it does.

Despite being called “Family Friendly” or “Casual,” Carnivores add a distinct “Take That” element (Actually, more of a “I’m going to eat that” element). People generally don’t accept a shrug and a muttered “Survival of the fittest” as a legitimate reason why you ate their prized long necked nocturnal bird. Eat a species into extinction and you have probably earned an enemy for the next few millennia of adaptation or at least a cold shoulder the size of the Ice Age.If The Beginning is meant as a gateway into the Evolution universe, it certainly goes about it in a strange way. Cards such as “Long Neck” and “Nocturnal” can be found in both The Beginning and the “real” version of Evolution. However, they play differently in both editions. It certainly makes for a bumpy ride if you decide to switch from one version to another.

As I stated at the beginning of this article, I’ve probably played this title more than 100 times. We’ve moved on from it but only because we decided to take the Plunge into Evolution proper. It still holds a place on our shelf, coming out when my son wants to “Gateway” friends and family with his favorite game. Not many titles can hold up like this, but Northstar Games have evolved something that, while not perfect, is certainly special.

Discuss this article
Log in to comment
Posts in discussion: What (Modern) Boardgame Have You Played the Most?

mc replied the topic: #283121 16 Oct 2018 03:10
Having kids or maybe a group that likes different games to you will put you in this situation (not always a bad thing, I think, if you're able to enjoy just having fun with people).

Evolution: Climate is a favourite in our house but the crown would probably go to Carcassonne, I've had it as long as I've had my eldest kid and it's just been a regular fixture. Honourable mentions i should think to Zooloretto and Survive.

My youngest is probably the most voracious gamer and his favourites are Ivanhoe (he's a shark) and Roborally. If he keeps up his pattern they'll overtake those others (of they haven't already).

None of those are my favourites, and I may have played others more, i don't know, but they sure provide good memories of the kids growing up beating down dad at every opportunity.

Erik Twice replied the topic: #283123 16 Oct 2018 04:54
According to my Boardgamegeek logs I've played about 2736 games of Netrunner. Given I've played it every week for atleast 5 years I'm fairly certain it's my most played boardgame.

I played Magic when I was a teen so it's probably my second most played game.

The next in line is Terraforming Mars. I've put 153 games into it. And that's just this year because I got it around this time last year. I'm a bit burned out of it, though, there's a very clear skill ceiling in this game that bothers me.

Shellhead replied the topic: #283128 16 Oct 2018 08:07
If CCGs count as boardgames, then my most-played game is easily Jyhad aka Vampire: the Eternal Struggle. I have no idea how many games I have played, but I played my first game in 1994 and my most recent game a few weeks ago. We had a weekly playgroup for many years, and while I didn't show up every week, I often got in 2 to 3 games every other week.

Second place would go to Arkham Horror 2nd edition. There are 49 characters, I think, and I have played each of them several times. Except for the promo character, who I keep forgetting even exists. My group played the base set alone at least 40 times, and then even more after the expansions started coming out.

Third place might be Camp Grizzly. It's very easy to get on the table, even with non-gamers.

hotseatgames replied the topic: #283130 16 Oct 2018 08:38
While the true answer is probably Descent: Journeys in the Dark, lately it's probably a toss-up between Cthulhu Wars and Spartacus. Both of these games really resonate with my group.

Descent was my first designer board game, and it saw a lot of table time, not just because we loved it, but it was the only game I had.

the_jake_1973 replied the topic: #283135 16 Oct 2018 09:01
Blood Bowl probably has the most plays, but not with my group. Merchants & Marauders has had the most plays with the group and shows no sign of slowing. Runebound is probably is second place.

I've been logging my games since 2005 and the big winner there is For Sale, which we used to use for rain dancing all the time. I have 60 logged plays of that. It's closely followed by Liar's Dice and then true solid board game Terraforming Mars.

If I kick Pente off for not being modern it is replaced by Trains and Pandemic.

I've played over 600 games of Race for the Galaxy if you count online play against a live opponent.

Star Wars Epic Duels was played a hell of a lot too before 2012.

san il defanso replied the topic: #283176 16 Oct 2018 23:07
I don't track my plays, but I have some guesses. I am sure that my number one in terms of raw numbers is Dominion, even if I haven't played it in years. If we include games via app, I suspect Ticket to Ride is up there as well. I think in terms of actual hours of play, Cosmic Encounter is probably number one. At this point, Dungeons & Dragons is probably up there too, but I don't think that actually counts.

Board game is almost undoubtedly Twilight Struggle -- probably 100+ plays of the 1st edition, then easily 100+ when I did playtesting on the new cards for the second edition. After that, probably another couple hundred plays. I need to play more online now that it is so easy to do so.

Black Barney replied the topic: #283195 17 Oct 2018 12:31
SG, i had no idea you did playtesting for 2nd edition. Considering that TS is such a beloved game here, have you given any thought about posting an article or blog about your experience doing that? i would find that super interesting having done playtesting before.

As for the other thread, it was just a joke. I'm much too lazy to go edit that post to put it back in...


*I had two windows open and the cat walked across the keyboard -- she's the likely culprit.

Black Barney replied the topic: #283214 17 Oct 2018 15:54
i actually like your other post just with the "." cuz with the avatar it makes you look like you're doing a full blown facepalm at Chris' suggestion of putting the white sheet over some of your games.
Read More...