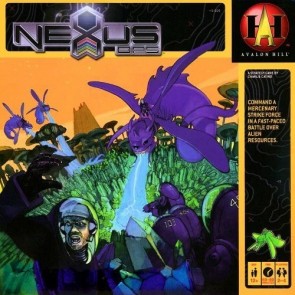 Game Name
Nexus Ops
There Will Be Games

Nexus Ops is an Ameritrash game if ever there was one. Bright neon plastic units that practically glow in the dark and a theme not too far removed from Starship Troopers. Move units one space, gather up resources, build a bigger army, smash your units into your enemy and roll to determine the victor.

Do you have a preferred version?  Do you love it or hate it? Do you still play it?

Discuss this article
Log in to comment
Posts in discussion: Flashback Friday - Nexus Ops - Love it or Hate It? Do you Still Play It?

san il defanso replied the topic: #281587 14 Sep 2018 08:55
I traded Zooloretto for an in-shrink copy of the AH edition. No regrets, it has become a perennial favorite. It's basically the only Dudes-on-a-map game I genuinely love, because the play style fits my personality so well. Not a ton of planning, dynamic board state, taking advantage of momentary benefits. This is my wheelhouse.

It is in my Top Ten, and it's not going anywhere.

This is the quintessential DOAM. I will never turn it down.

jpat replied the topic: #281591 14 Sep 2018 09:26
For me, what makes Nexus Ops so prized is that it strips off the chrome and hits the accelerator. Nexus Ops avoids the slow buildup of many/most DoaMs and gets the players at each other almost right away (no hourlong marshaling of forces or engaging with neutrals first). There's a simple but nice exploration element that also helps accelerate the game by introducing tiles that often put new units near the center of the board, which itself isn't too big to traverse relatively easily. There are also a minimum of well-demarcated terrain effects--some flavor and effect but not too much. The king-of-the-hill center space is definitely worth fighting over but not completely dominating strategically. The combat mechanic, though hardly innovative, is simple, engaging, visceral, and "right-sized"; compare it to any of the increasingly baroque FFG approaches from around that time and later to see the difference. The economy is just right, so that you can afford to lose units but not completely waste them. Not only are the units cool as hell (I have the AH edition), but there is just enough differentiation of them to create interest without overwhelming players with incrementally different options. The cards help juice things up just enough with added powers and dole out just the right number of VPs. The game is compact in space and time, and yet it retains, even purifies, the DoaM experience, and I don't recall in about ten plays (I know, not enough, right?) the game ever feeling too short for all that.

Michael Barnes replied the topic: #281598 14 Sep 2018 09:36
Simply stated, this is the best DOAM game ever published and it is absolutely evergreen. Time has revealed it to be a near perfect distillation of key genre concepts both looking back and forward. I still feel like designers are chasing what this game has already done.

When it came out, I had my store. We got this little demo kit for it. It was like a paper board and two sets of pieces. It looked stupid as hell. But we tried it and everyone loved it. It was like Axis and Allies in some ways, like Twilight Imperium in others, some Risk in there...maybe some Starcraft...it was singular and fresh. And it stil is.

I love that it exists in a perfect state. No expansions. No redevelopments. Only the horribly misguided FFG reprint, which kept the game intact while ruining the visuals. And it’s a total one hit wonder for Charlie Catino, who never did anything else but CCGs. He was involved with the early develoment of Magic.

This is, I think, the only game I have ever owned two copies of. When it went OOP, I bought another one. I still have both.

Jexik replied the topic: #281599 14 Sep 2018 09:42
Own it. Totally overtraded superfly for it but have no regrets. Probably haven't played it more than once in the past year. I should rectify that.

It's in my top ten--Near perfect.

Hate the colors of my FFG version.

Love it so much that I 3D printed a monolith.

Ah_Pook replied the topic: #281605 14 Sep 2018 10:28
Love it, don't play it nearly enough since most people I play with don't really like direct conflict games. It distills the doam experience down to pure fun imo.

I made a custom black light monolith for it, even. 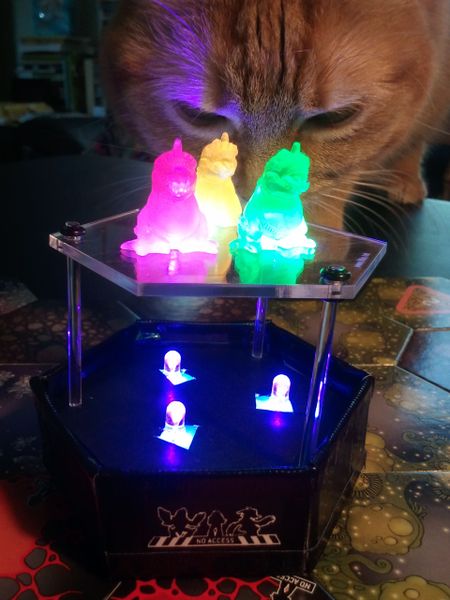 jeb replied the topic: #281615 14 Sep 2018 12:56
AH owner here, box is taped, I have cool purple plastic gems for the money. I play this probably 10x a year. It's a truly beautiful game on the table and it plays light and is fun as hell. THIS is my gateway game, honestly. When folks want to know what my little hobby is about, I have them play NEXUS OPS.

Ken B. replied the topic: #281620 14 Sep 2018 14:36
There is an undeniable and untouchable genius to this game. It's so much fun. Awesome combat, surprising cardplay, shifting objectives, fast playing time. The game essentially starts and hits the ground running immediately.

Still solid as hell. I played it a bit too much however, so I burnt out on it a bit.

I have rethemed this game twice. Once as an early Edo period themed game using components from Shogun/samurai swords. And the second time as StarCraft using the FFG StarCraft components. I never quite finished the StarCraft version, but the Edo version is done.

I also made larger hex tiles that were sculpted to mimic the AH version. They were larger hexes because I was tired of the crowding problem. I sold those off but still possess the molds.

I still have a copy of the AG version in shrink.

I like a few things that FFG did with it though. Like adding a couple extra exploration tiles, so that you ate never sure what the last time will reveal, unlike the AH version. That does add a fair amount of tension and something I wanted to do to my own. The alternate maelstrom/monolith rules aren't bad either. Otherwise, the FFG version can be lost in time and forgotten merely because the board tiles are egregious.

I may not play it alot, but there is no better title than Nexus Ops to fill that niche, though many have tried. It will absolutely never leave my collection. It is a top ten and compulsory ameritrash game.

I've had people whose opinions I respect recommend Concordia, but I can't make it three minutes into a how-to-play video without going, "NEXT!"

southernman replied the topic: #281638 14 Sep 2018 17:01
I've got the AH edition and even though it doesn't get played often now (a combination of owning lots of great games, few gaming opportunities and a small group) it will only be sold when I finsih up in the hobby.
The minis are great, the rules simple but thorough and near perfect, combat both simplistic and involved ... and fun, and the VP objectives ahead of its time. I have always talked about building a custom monolith but never done it - maybe I just like it how it came.

Do tell about Thurn and Taxis. Was considering doing a article on it.

I've found some of the best games lie outside of the top 200 that the hivemind recommends.

Proving yet again that the only reason to use that system is for inventory purposes when running a game shop so that you remain stocked in fashionable trends.

Do tell about Thurn and Taxis. Was considering doing a article on it.

Please don't. Also it will be a couple of hours of your life you will never get back.

Ken B. wrote: I've had people whose opinions I respect recommend Concordia, but I can't make it three minutes into a how-to-play video without going, "NEXT!"

It's not bad. In fact it's probably pretty good. 22 all time surprised me though.

Thurn and Taxis felt like a proto Ticket to Ride.

Ah_Pook wrote: I made a custom black light monolith for it, even.

OK, that is the coolest game pimp I have ever seen. I want to play with you!

Possibly my favorite game of all time.

Whoshim replied the topic: #281645 14 Sep 2018 19:22
I found NexusOps unsatisfying. I won the first multiplayer game that I played even though I was basically destroyed. I was able to get points through the cards matching up pretty exactly with what I was able to do each turn. It just felt weird to me to lose so much but still win the game. It was not satisfying. I think I only played one game after that.

While Risk does not have a lot of bells and whistles, it feels more satisfying when I win that game.

I don't play very many DoaM games much right now (my sons are still young). We will start doing Axis and Allies in the near future. Then, when they are a little older, we will be playing Imperial and Rex.

SaMoKo replied the topic: #281646 14 Sep 2018 20:33
Mentioned in another thread that this game was alright, but I honestly find it a bit dull for a DOAM. Maybe I just haven’t found what I’ve been looking for in the genre, but I’ll know it when I see it. Nexus Ops seems very crunchy to me, and a bit too chaotic. I’d honestly rather play Dominant Species, Chaos in the Old World, or Combat Commander (2p)
Read More...