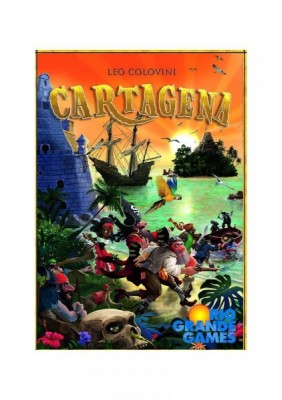 This pirate themed racing game was once the go-to filler game at every game day.

Designed by Leo Colovini, and published in 2000, it was a Spiel des Jahres Recommendation in 2001. Cartagena's theme is the 1672 pirate-led jailbreak from the dreaded fortress of Cartagena. It came with a little story about it, so you got a little history lesson with the your game. It also included two variations,  Jamaica and Tortuga, which play really quite differntly from each other

The current Cartagena 2nd edition, released in 2017, includes the original game, the sequel includes, and several variants including a "black magic varient".

Is this game still on your shelf? Which version do you prefer? Tells us what you think.

Discuss this article
Log in to comment
Posts in discussion: Flashback Friday - Cartagena - Love It or Hate It? Do You Still Play It?

I like Colovini's stuff that I've played- it's really bare essence kind of thing, you know, fully distilled. Really simple games, but there's always something interesting there. Explain in 2 minutes, start playing, and then get kind of engrossed in it as you realise there's obviously got to be a bit of a trick to doing well, but, you can't quite see it, or it's going to depend on what the other players are doing. This one, you've got to have a keen eye for timing things right, or you just get stranded. And if you think about it, what he's done here is basically make Candyland into a real game with a minor tweak. It's a neat little engineering solution if nothing else.

The new edition is kind of like choose your own game - there's all sorts of variables - I think you can play Cartagena, Cartagena 2, a combination of bits of those, where you have to get on a boat but there are limited spots, a version where you play it backwards (as in, you pull the pirates forward to pick up cards (i think) ) and it also has these extra rules which give each suit a special ability. They work pretty well and give it a bit of spice. Basically you have to declare you are using the special ability with a card instead of using it for movement. They are also vaguely thematic (at least in comparison with the main game). So like, if you use the gun symbol special ability you get to rob an opponent of a card. There are treasures to go on the treasure spaces that you can dig up (extra cards, mainly, but also a snake that bites you and you have to go back to the last available rum spot for a drink to calm your nerves). So they're kind of fun, and whenever we play the game we pretty much always use that ruleset.

Something else to point out as that the publisher (or Colovini, I don't know) kind of Fargo'd the whole "famous jailbreak" thing - nothing like it ever happened, as far as I've been able to make out.

stormseeker75 replied the topic: #293036 26 Feb 2019 07:28
Cartagena is perfect. So simple to teach and tons of player interaction. I don't play this much because I don't have groups around, but I will play this any time someone asks to play it.

ubarose replied the topic: #293041 26 Feb 2019 09:14
I am a bit surprised at how few responses we have to this weeks FBF. Perhaps this is a indication that Cartagena didn’t have the staying power of some of the other games that we have featured.

Jackwraith replied the topic: #293042 26 Feb 2019 09:43
Yeah, sorry. There's a rather large chunk of German/Euro-style games that I have virtually no connection to whatsoever and this is one of them. During the years that those were coming to prominence, I was largely out of the board game scene, so I've never played or only played a lot of classics like El Grande or Cartegena a couple times. I have since caught up on a lot of Knizia designs and played them extensively, but not much more. Give me a Games Workshop or Avalon Hill or SPI or Knizia Flashback and I'm all over it. But I'm a little limited on mid- to late-90s Euros.

ubarose replied the topic: #293047 26 Feb 2019 10:21
No need to be sorry. It is interesting to discover what games that were popular when they first came out, and have been around and in print (more or less) for 10-20 years have been able to find new audiences, and which ones haven’t.

I wonder if part of the problem is they didn’t stay true to the clean simplicity of the original game, and muddied it up with all the variants they added in.

san il defanso replied the topic: #293083 26 Feb 2019 15:49
I ended up reviewing this for MM and I found it pretty thin. Lots of great light German games from the turning of the millennium, but this one frankly lighter than I cared for.

ubarose wrote: I am a bit surprised at how few responses we have to this weeks FBF. Perhaps this is a indication that Cartagena didn’t have the staying power of some of the other games that we have featured.

I've never even heard if it until now.

No recommendations, no whispers about it while playing Jamaica/Pirates of the Spanish Main/etc.