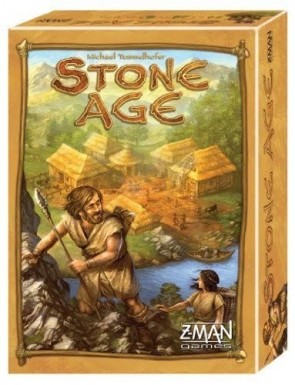 But does the game stink too? What's your opinion?

Discuss this article
Log in to comment
Posts in discussion: Flashback Friday - Stone Age - Love It or Hate It? Do you Still Play It?

Jackwraith replied the topic: #293537 08 Mar 2019 10:10
Do. Not. Like. I first played during a period of time when a couple friends of mine were fully engaged with Agricola-type Euros and this just seemed like one more of those. I played one game with them (compered to their dozens of plays), was completely in over my head, don't really like that type of game to begin with, and never went back. So, to say my experience is limited and I'm probably judging too harshly is likely accurate. But I'm still not interested.

Edit: And perhaps I shouldn't say "don't really like that type of game." I do like worker placement stuff. Maybe I just don't like the type that incorporates the type of mechanics that Agricola and Stone Age seem to emphasize? I don't know. It's been too long. I guess I should try it again. But I don't really want to.

We never saw the point of going to Stone Age. How many worker placement games does one need?

I'm sure that since ToS site exists, that there is a ready made market eager to throw money at it. Myself, I think my worker placement itch is satisfied with other titles. I like All Creatures Big and Small for that purpose.

RobertB replied the topic: #293541 08 Mar 2019 10:45
It's one of the two or three games I'll play on Boardgamearena.com, because it plays pretty fast and is relatively popular. It's not the awesomest game ever, but it's a decent worker placement game. If someone wants to play it, I won't say no.

Josh Look wrote: No. No. Noooo.

Obviously would say no.

Sagrilarus replied the topic: #293546 08 Mar 2019 11:37
I play this once in a while, and have to relearn the iconography every single time. Asking questions about it gives away your plans, so as often as not I don't ask, then misread something and lose points because of it. That kind of takes the wind out of this game's sails for me.

Legomancer replied the topic: #293548 08 Mar 2019 12:10
I liked the game but eventually bagged it because I didn't like the scripted first and second placements, couldn't remember the hut iconography, and generally felt that Lords of Waterdeep was a more fun game and I'd rather play that. (Of course, now everyone else has seemingly decided that LoW sucks, so poor plan on my part I guess.)

Michael Barnes replied the topic: #293551 08 Mar 2019 12:43
Yeah, I am in the “perfectly cromulent” camp here. It’s decent. But almost wholly unremarkable. Not sure why they’ve bothered with a 10th anniversary edition, is there really an abiding fondness for it out there?

Michael Barnes wrote: Not sure why they’ve bothered with a 10th anniversary edition, is there really an abiding fondness for it out there?

Yes, I think so. I think it's among a lot of people's first games and is one they can introduce to family/non-gamers.

I've actually only played it twice. First time was early on when I was getting into game and I thought it was fine. Second time was within the last six months. I found it fine then too. I am only tempted by it insofar as it's something I could play with my parents. Ultimately, I don't know how interesting they'd find it.

Sagrilarus replied the topic: #293555 08 Mar 2019 13:31
Stone Age gets regular traffic on Reddit amongst the new gamers crowd. It has appeal to people first entering the the more hobby-part of the hobby.

1) I’ll play anything with a Michael Menzel isometric game board. I just love his integration of style and function.
2) this is a really fun integration of dice mechanics and worker placement that doesn’t get mired down in minute little dice-manipulation tactics. It’s a perennial gateway game for a reason.

GorillaGrody wrote: Will no one speak for Stone Age?
Okay, though I feel pretty much the way those above feel, I’ll say this:

1) I’ll play anything with a Michael Menzel isometric game board. I just love his integration of style and function.
2) this is a really fun integration of dice mechanics and worker placement that doesn’t get mired down in minute little dice-manipulation tactics. It’s a perennial gateway game for a reason.

I didn't really knife the game that badly. My issue is with usability, not the game itself. Were I to play it more often, or were the symbols a little easier to understand I think I'd enjoy it more. And I'm not a worker-placement fan. But the dice alleviate some of that. And it's the place where I offhandedly invented Lazy Karl, who is a gaming icon in my group now. So I have to give it appropriate props for that.

charlest replied the topic: #293560 08 Mar 2019 15:57
I use to enjoy this one quite a bit and would happily play it now. The dice mechanism added a degree of drama to the game and the strategy was direct enough without being point-salady to keep me interested.

The first several turns feel so scripted. First player goes for the farming track, second player goes for the tools. The path to the end has such an unvarying orchestrated feeling of going through the motions, whether you win or lose based on the point multiplying cards you've traded resources (almost always wood) for. I can't find the fun here anymore.

I haven't gone to the love shack in many plays.

Love the art on the board though, and it's a good math / division teaching game for the young kids, so it stills sees the light of day.

For a similar style of game, I'd much rather play Pillars of the Earth.

And beyond all that... the smell of the dice cup when I first unboxed this still haunts me.

I think I agree. Stone Age is cute, but Pillars of the Earth is better if you are just looking for a fairly straight forward worker placement game.

I don't play either anymore. But if someone else wanted to play, I wouldn't object..unless that cup still stank. Yikes.

A. Drunk Will Keyon
B. Drunk Matt Lotter
C. Drunk Josh Look
D. All of the above

Then I got reprimanded for Will’s language.

mc replied the topic: #293571 08 Mar 2019 18:30
Played it for the first time recently.
I am not a fan of WP. I know that's probably the standard round here. For me it's because usually they break all thematic ties for me. There's always things in there that give me an uncanny valley effect that just piss me off. I can cope with abstraction, but not gamey abstraction, where you can see the mechanisms pointing out.

So Stone Age I felt was 2 games, in that respect, because the sending out your hunters and gatherers and rolling dice for them was great, and felt like a very nice abstraction. But the cards, I couldn't work out what was going on thematically - just a maths exercise , really, and not a hugely interesting one. I didn't feel I was giving my tribe any character or whatever. Just adding up. I burnt through the deck that triggers the ending as quick as I could.

Funnily enough I was teaching myself Neanderthal at the time which actually uses the same idea for hunting and gathering. Except of course you can muscle in on territory, get attacked by predators, there's changes to the spaces, and improvements are thematically explained pretty well. There's plenty of problems with it of course. And my kids are probably not ready for it like they would be for Stone Age. I guess though I want those thematic ties to be meaningful. And the precarious existence theme doesnt come through in swapping resources for VP via a card with... a picture of... a chief? I think?

I mainly play it in my board game design class as it is one of the "faster" and "simpler" worker placement games for the students to understand.

I know that the WP playing community prefers a more complicated game (see Scythe or Root or Everdell or...) but I think it's still one of best gateway wp games around.

san il defanso replied the topic: #293592 10 Mar 2019 05:43
I only played a couple times when it first came out. I wasn't impressed. I felt like it was too nakedly number-based, even for its genre. I also felt like the endgame scoring was disproportionately important. Fully 80% of the final scores were from bonuses.

But it does look really nice, and it's certainly more forgiving than something like Agricola. Just didn't click for me though.

I don’t like the end game scoring either. As someone said more eloquently in another thread, don’t tell me A is important and have it be 80% of the game, but then have B be 80% of the final score. I find this true of a lot of Euro games. It also makes it not fun to play with people who know that the game is really about digging for that set of 3 purple tiles or whatever, and not actually about making cupcakes or selling fruit or whatever the game seems to be about.

san il defanso replied the topic: #293609 10 Mar 2019 17:41
It's a supreme middle finger to new players too. I've played too many Euros with some dingus who camps out in BGG threads learning exactly which cards to play or how to win best. Stone Age seems designed to cater to them.

I generally like Euros but it's sort of an endemic problem in the genre that the endgame always feels like an audit.