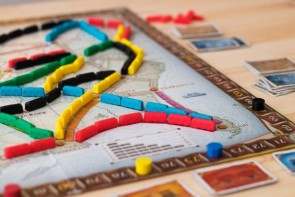 A typical dull British morning: grey skies to dampen the soul but not quite cold or wet or windy enough to even be interesting. Yet, coffee in hand, I feel a misplaced sense of exhilaration. Curving away into the thin fog below me are two sets of parallel rails. I know exactly where they go, back to my childhood home. A small seaside town I've been back to countless times. Still, the low whine of an approaching train heralds a small pleasure. A day of movement without effort to enjoy, to think, to write.

Years ago I took a long train journey with a colleague whom, I discovered about five minutes into the trip, was an ardent trainspotter. Years I'd worked with him and he'd never said a word until it was too late. I was stuck in a carriage with him for six hours as he regaled me with details of every branch line and piece of rolling stock we passed. It was a salutary lesson on how geeks of any stripe can appear to others, from the outside. On the way home, I made my excuses and got a separate train.

So, the lure of train games for the sake of train games is not one I've ever felt. But however indifferent you are to the smell of steam engines, there's something about those sleek iron dragons that has primal appeal. The success of Ticket to Ride isn't just down to the vicious thrills of its races of set-collecting and route-blocking. It was one of the first modern board games I bought, too. I can still remember friends delighting over the little plastic engines. There's a good reason why its smooth mobile adaptation languishes unplayed on my phone.

You can't help being in the board game hobby for long before you realise how popular train games are. Even the list of genres is long enough to feel like an epic journey: crayon rail, 18XX, the many variants of Age of Steam. It's not hard to see how the Venn circles overlap. Gamers like structured things. Engineering is a structured thing. Trains are perhaps the most romantic and comprehensible product of engineering. Far more appealing than the black-box electronica that eats away modern life. What's harder to understand is why it seems to bring out the very best in so many designers.

Take Martin Wallace. The hallmark of his games is tight, interlinked mechanical design, often with theme and interaction, which punish poor play. Nowhere is this triptych better expressed than Age of Steam. It's a vicious game where, like the early rail barons, you can screw yourself from the off by taking out too many loans to support your business. Even its plan round discs are too hard-edged for me and it loses all the romance in its austere track tiles. The joy of a locomotive is in seeing how it works, not having it crush you.

He's hardly the only example. The excellent Trains from AEG is one of the best deck building games around. And the whole shares and economics package finds it's purest expression in Railroad Rivals. Take almost every genre and there'll be a train game of some sort among the top titles.

We're pulling into London now, the towering concrete and bright graffiti pulling at a hundred heartstrings. I came here a couple of times a year as a teen, Dad in tow, to see the sights and shop for games. A day at the Tower, cases lined with the bloodied yet beautiful steel of history. A day winding down back alleys, searching for games where I could pretend to use such steel. Many of the shops I browsed, father full of loving patience, are still open. Orc's Nest, Leisure Games and others, long ago buzzed from my life by the convenience of online shopping.

We'd go on the train then, the rattling carriages a harbinger of wonder. The underground reeking of sweat and diesel, its vast network of boreholes feeling too modern to have existed before the war. Years later I'd take my first train journey up to England's northern heartlands. Without the distraction of phone or laptop, I stared in awe at the acres of industrial scarring that littered the land. Awful yet inspiring, brutal monuments to human ambition and skill. The same skills that built the railway on which I rode.

I've never designed a game. But I can imagine that the same ambition and skill that motivated those early engineers burns in designers. The rules are the engine, the game itself the journey, the one powering the other to uncertain yet thrilling destinations. The same pleasure in interlinking difficult things for the greater good of the whole powers both designers and players. No wonder train games are so popular when you can see one as a microcosm of the whole hobby, bottled inside itself.

Next stop is Norwich. I glance up at the implacable digital timetable and see I have just missed a connection and have an hour to wait. There is no question about how I'm going to spend it. The walk up the ancient cobbled streets and past the vast Cathedral is a delight. But when I reach The Games Room, I'm uncertain. Within the windows, wonders await. But I already have a hundred wonders, sat underplayed in cupboards at home. With regret, I snap a photo and head back to the station, wondering what Kickstarter has done to the kinds of places in which I learned the gaming trade.

One of the biggest niggles among that hundred wonders is Railroad Tycoon. It was among the earliest boxes in my collection and I've played it exactly once. It's Age of Steam with all those hard edges replaced by the soft curve of sculpted plastic trains, and I loved. Enough that I went right out and bought the Railways of England and Wales expansion since when both have sat gathering dust. There are many reasons. Partly it's the physical size of the monster board that makes it awkward to find space. Partly its the Railways of the World re-release with its minor hex changes that my geeky self wants to somehow paint onto the old board. Mostly it's the sheer, relentless pressure of new things in my collection.

My Uncle was a watchmaker and antiques dealer who ran a shop in the little seaside town where I grew up. I'm sure he'd have a thing or so to say about the endless drive for new and shiny over the pleasure in old things for their craft, their beauty and their stories. He would have seen the value in a rusty steam train on its own terms, not a thing invalidated by better technology. He had an old silver tobacco box which, as a boy, fascinated me. It seemed to open as if by magic. Now I know he simply squeezed it with more strength than my boyish hands could muster. And with my first squeeze of adult strength, it squashed the magic. Sometimes it's better not to see how everything works and just accept magic when you find it for its own sake.

Journey's end. The door opens and in rushes a taste of seaside air. The rails run across the road from the platform to a tourist facsimile of an old rail depot, a real refurbished steam engine smoking in the yard. A beach and a sniff of peeling nostalgia keep people coming and the economy of this little town going. I look down the high street and see there's still nothing else here. A vacancy my teenage self tried to fill with games. Not ones about trains, but ones about spaceships and vampires and wizards. As I turn and look back along the track that bought me here, I wonder if trains might be just as exciting after all.

Gary Sax replied the topic: #297711 27 May 2019 09:24
I think trains are so gamed because they are so completely managed. Strict centrally planned schedules, unalterable infrastructure decisions about routes, etc. Fits with the gamer control ethos.

I'm always surprised airlines aren't as well gamed, since they have many of the same features.

Gary Sax wrote: I'm always surprised airlines aren't as well gamed, since they have many of the same features.

Airplanes are boring. You build one airport, and then another, and voila. If you played Transport Tycoon, they're the best to get money, but I rarely do them because they're boring.

(PS. I know *actual* airplanes operations are complex and not boring/ You can game this, but it will end up with something like Kanban instead of a train game)