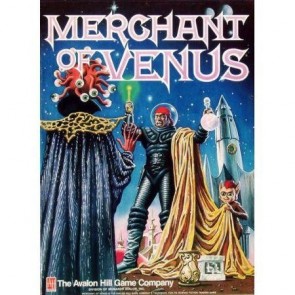 Merchant of Venus is considered by many to be Richard Hamblen's masterpeice. It was originally designed on commission for Mccormick Spices as a spice trading game. Mccormick rejected the design as too complex.  So Avalon Hill rethemed the game and published it in 1988 as Merchant of Venus; setting it in an unexplored part of the galaxy during a reawakening of galactic civilization with players moving around the board as traders discovering long-forgotten pockets of civilization and buying and selling goods.

After it went out of print, it became a holy grail game for many boardgamers, with people creating their own homemade copies of the game. One of the obstacles to getting it reprinted was that its designer, Richard Hamblen, had become a bit of a recluse and had disappered off the grid. Additionally, who owned the rights and trademark to Merchant of Venus was unclear. On October 24, 2011, in an amazing turn of events, two publishers, Stronghold and Fantasy Flight, both announced that they were reprinting the game. Stronghold had found Richard Hamblen and had reached an agreement with him to reprint the game. However, Fantasy Flight Games announced later that same day that they had acquired the right to republish the game from Hasbro, which Hasbro had acquired through their purchase of Avalon Hill. It was then discoverd that the trademark wasn't registered. Hasbro quickly registered it the next day. Eventually Stronghold and Fantasy Flight Games came to an agreement, and Fantasy Flight Games printed a new edition of Merchant of Venus which included both the original rules, and thier own updated version of the rules.

But was all this fuss and bother worth it? Does a game designed in 1988 still hold up today? Were Fantasy Flight's new rules an improvement?

What do you think? Let us know here. Also consider rating and reviewing Merchant of Venus in its listing in our Board Game Directory. There you can also find all the other articles and reviews we have about Merchant Venus.

Discuss this article
Log in to comment
Posts in discussion: Flashback Friday - Merchant of Venus - Love It or Hate It? Do You Still Play It?

Gary Sax replied the topic: #296128 26 Apr 2019 12:09
Merchants is the almost perfect essence of the pick up and deliver genre. Plays fast, streamlined, with a great but super subtle supply and demand system that jiggers and rejiggers which routes are most valuable and worthwhile, preventing completely efficient play (along with to a lesser extent the dice).

It was originally designed on commission for Mccormick Spices as a spice trading game. Mccormick rejected the design as too complex. So Avalon Hill rethemed the game and published it in 1988 as Merchant of Venus


This game is a pleasure to play every time. The way some products become more valuable over time and then devalue once they become available . . . really shows what can be done with cardboard if you take your time and design carefully, and then put the time in to refine the concepts.

We have a Merchant of Venus night at our May Gaming Getaway every year, so I'm due to play this coming weekend. Very much looking forward to it.

lj1983 wrote: I really enjoy Merchants. another game I've re-acquired, this time after trading it to Sag. I've yet to play the "new" version from FFG, the classic has just the right mix of randomness and planning.

Thank you for the Plano box by the way.

ubarose replied the topic: #296137 26 Apr 2019 13:02
I find the original Avalon Hill version to be more functional and easier to play. The FFG version is prettier, but after playing it, I decided that the changes they made to the components made the game even more fiddly.

ubarose wrote: I find the original Avalon Hill version to be more functional and easier to play. The FFG version is prettier, but after playing it, I decided that the changes they made to the components made the game even more fiddly.

I thought Fiddly was one of the Fs in FFG.

Seriously, they always do that. Rare is the FFG game that isn't full of a million tiny bits that need to be configured just so. It's the worst with their reprints because you know it could have been better, like in this case.

...from what I've seen anyway. I haven't gotten to play MoV. It seems like the kind of thing I'd enjoy. Maybe someday.

Matt Thrower replied the topic: #296146 26 Apr 2019 14:12
The original AH mechanics are the best board game economy I've ever seen. Basic supply and demand, with the strategies that unfurl from it, right on your tabletop. And of course the sci-fi theme makes it a whole lot more fun to explore.

The FFG reprint of those rules was great. FFG's own "version" was some bloated, over-worked, over-long, Elite-on-a-board garbage.

Much as I enjoyed the AH rules, this is one I did sell on eventually. It ran just a bit too long for what it was, and didn't see regular play.

Ah_Pook replied the topic: #296149 26 Apr 2019 14:50
I picked this up in a trade in January and it has rapidly become one of my very favorite games. Ive played it 17 times in that time, and I foresee playing it many many more. Everyone I've introduced it to has loved it. Plus it is easily my favorite solo game, just playing 4p all sides.

I haven't ever tried the new FFG rules, and I don't think I ever need to. The original rules are perfect, and the FFG changes look universally bad.

Count Orlok replied the topic: #296151 26 Apr 2019 16:29
How rare are copies of this now? It seemed like there was "demand" for a reprint, and then the snafu with republishing generated interest, but it seemed to have come and gone pretty quietly. I meant to get a copy at some point, but never did.

Michael Barnes replied the topic: #296153 26 Apr 2019 18:32
A masterpiece, and out of Hamblen’s games this is the one that I think has the most longevity- it runs long, but it just kind of does that. Taking out the fifth and sixth player was really a good idea, I prefer it with 3.

There is not better pick up and deliver game. It’s better than Firefly, Xia, Merchants and Marauders, all of them. Those games have come and gone, but MoV remains, even out of print again.

The FFG rules are the typical overwrought miss-the-mark bullshit with stupid details and fiddlefuck crap that the game got by fine without. But this reprint came at PEAK Fantasy Flight, and that was frankly a pretty terrible time for their designs and remakes. It was almost like Mr. Petersen would call a production meeting and present a PPT with details about how to fuck up a reprint with unasked for shit. Had FFG released it without the classic game in the box, it would have been a total fiasco. Thank god the Stronghold thing happened and the outcome was that the original game stayed.

Agreed that the original AH rules are much better than the bloated FFG nonsense.

Gary Sax replied the topic: #296156 26 Apr 2019 19:37
It's very stripped down and focused. That's why I can't agree with Barnes saying it's "better" than, say, merchants and marauders because mov is literally doing one thing (extremely well).

Michael Barnes replied the topic: #296157 26 Apr 2019 19:49
But that is exactly what I like. I’m so over games that strain and over-exert themselves to tell a garbage story or express a so-called “theme”, both of which requiring a bunch of minor rules, extra components or other bloat to prop up. I’d rather a game be more focused and definitive like MOV.

Sagrilarus replied the topic: #296160 26 Apr 2019 21:28
I think the game’s setting is aided by it not taking itself too seriously. Delivering immortal grease and finest dust keep your approach to the game appropriately lighthearted.

san il defanso replied the topic: #296163 27 Apr 2019 02:56
There's room for games like Merchant of Venus and Merchants & Marauders both. Merchant of Venus does its one thing, the economic space stuff, really well, but the adventuring and exploration part is a little de-emphasized as a result. That's not a bad thing, but there's definitely a place for games like M&M, Firefly, and Xia (which I haven't played) to step in there and be about more than just shipping goods to places.

This is sort of the design space where the FFG redesign dwells, and I don't think it's all bad. I feel like it does ship customization much stronger, and there's definitely more of a feeling of a full on lived-in universe. Its main issue is that it's just too darn long, at least a good hour per player if you are rushing through it. It has its charms, but it's not polished enough to really come off well against the other more complex games I mentioned earlier.

But the original is still great. I play it with some regularity, and I'd probably put it in my top ten. I like the FFG edition quite a bit, in the sense that it's the graphical version I'm most accustomed to.

Jackwraith replied the topic: #296169 27 Apr 2019 11:16
I've also played the FFG rules and enjoyed them. I like the original game's mechanics more, but I'm one of the few (alongside Nate) that usually likes FFG's additional chrome and this one was no different. It's not like the original rules are a liturgy. I'd be willing to bet that, just like the CE/Dune guys, Hamblen was probably tickled to try his classic design in a new way when FFG released it. I remember the unbridled outrage here that FFG had dared to release the holy relic with "new rules", even though the classic rules were in the same box. You got two versions of this great game in one package and yet the response was the height of nerd indignation. I don't get it.

As for the game itself, I like it and I've only ever owned the FFG version, but I sold it years ago because it wasn't getting played and I needed the cash. I'm not sure if I'd try to get it back at this point, since I have M&M (because pirates) and Firefly (because Firefly.) Still a great game, though.

Gary Sax replied the topic: #296170 27 Apr 2019 13:04
This is from the outside, since I have very brightly colored pnp version, but I think one of my only beefs with the ffg version is that the goods tile chits could differentiate from each other a little more clearly from a distance. That's kind of a big deal since interpretation of the routes is the key thing in this game.

Sagrilarus replied the topic: #296173 27 Apr 2019 16:57
Had not the whole Stronghold/Hamblen thing happened FFG would have issued their revised version alone, and the original version would still be worth $175.
Read More...