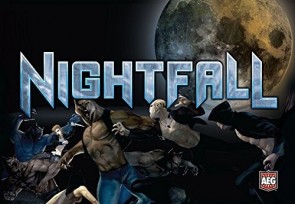 The years following the release of Dominion brought on a slew of Deck Builders. Some have survived, while others have fallen by the wayside and gone out-of-print. One of the later is Nightfall. Considering the amout of ink Nightfall recieved on this site, I would have never predicted that Nightfall would be the AEG Deckbuilder to fade away, while Thunderstone (which is close in age to Nightfall), has evolved and still continues to be supported.

Nightfall's Chaining* mechinism felt so innovative and exciting at the time. Although it was a bit fiddly and resolving it was a bit complicated. Perhaps the audience for Deck Builders is an audience that is looking for liter games, as it seems that the successful Deck Builders of recent years, like Machi Koro and the DC Deck Builder, have been simpler rather than more complex. Or maybe the release of Nightfall on iOS which made the game so easy to play killed off the card board version.

Whatever the reason, it seems to have fallen so out of favor that despite being out of print you can still pick up new copies for half the original price: Nightfall on Amazon

What do you think? Love it or hate it? Do you still play it?

*If you are unfamiliar with NightFall here is a good description of it from Josh Look: Nightfall Review

Discuss this article
Log in to comment
Posts in discussion: Flashback Friday - Nightfall - Love It or Hate It? Do You Still Play It?

Sagrilarus replied the topic: #297862 31 May 2019 12:26
I had trouble with usability on this game when it first came out. So I never went back to it. Having cards all over the table, each pile facing a different direction meant that Situational Awareness was awful. Granted, if I had five or six plays under my belt I wouldn't have had to read all the cards all the time, but that's an argument you can make for every game, and this one didn't invite a second play.

I think the iOS version of the game killed the card board version for exactly this reason. On iOS every thing is right side up, and things are highlighted so your "Situational Awareness" is soooo much better.

Plus, it gives you an indicator showing you which of your own card are playable. And the chain resolution is sooo much faster.

hotseatgames replied the topic: #297870 31 May 2019 13:31
I really liked this game when it came out, since it was all fighting, all the time. What killed it was that it got overly long as the player count grew, and usually the moment someone landed a solid attack, it was all over for the victim.

I sold my copy a long time ago.

Three players is the sweet spot.

I thought it was a fun slugfest for 2 or 3, with quick games and some nice combos.

Legomancer wrote: Am I the only one who really dug this? I thought it was a hoot, and the only reason I got rid of my copy was because of the app, which I figured would have expansions (it did not.)

I thought it was a fun slugfest for 2 or 3, with quick games and some nice combos.

A lot of people here dug it. We probably have like 15 reviews/articles/blogs on it and the expansions here.

But then they didn't. Is it that the iOS came along? Or that better Deck Builders came along?

Michael Barnes replied the topic: #297879 31 May 2019 15:09
I think other deckbuilders killed it. This was one of the first, and it was maybe a little overly complicated.

Yes. I think the fact that it really only played well with 3 players also hurt it. 2 players gave you no choices. 4-players was too long and messy.

ecargo replied the topic: #297885 31 May 2019 16:34
I wanted to like this so much when it came out. It ended up just feeling like you would kingmake someone given how combat worked. (Something that Shards of Infinity deals with much better.)

The chaining mechanic was a cool idea and I think there could be a good game made out of it. It's surprising in a way that that hasn't been revisited in some form. (Or, I'm woefully misremembering how it works and it'd be awful.)

ecargo wrote:
The chaining mechanic was a cool idea and I think there could be a good game made out of it. It's surprising in a way that that hasn't been revisited in some form. (Or, I'm woefully misremembering how it works and it'd be awful.)

A discussion on the Chaining and if it had been used in other games since Nightfall is what prompted me to choose this for our FBF. No one could remember if it had been used before of since this game. I think it is a really cool mechanic, just not with cards that have a lot of text that need to be read upside down across a table.
Read More...