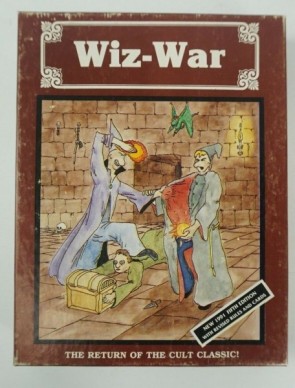 Capture the flag with wizards and spells.

Wiz-War was first published in 1985 by Jolly Games. The first edition of the game had photocopied chits and rules and the board tiles were silk screened by hand by Tom Jolly. Game materials were inproved over the next serveral editions. It went out of print after it's 7th edition which was published in 1997. Fantasy Flight Games published the 8th edition in 2012.

It is considered a  "beer & pretzels" game. Do you agree? What do you think of Wiz-Wars? Do you have a favorite edition? Do you love it or hate it? Do you still play it?

Discuss this article
Log in to comment
Posts in discussion: Flashback Friday - Wiz-War - Love It Or Hate It? Do You Still Play It?

It's so fun because of all the crazy cards and the way the game gives you license to use your creativity when playing those cards. A solid block of stone can block a passage, sure, but it can also trap a treasure or a wizard in a dead-end. And rotating one of the boards is always good for a surprise move (even a win!)

It's one of those games that is not only crazy fun while you play it but also sticks in your memory as you love to be able to say "Remember that time when...?"

I remember that time. It was so much fun!

Do you ever regret trading away your old copy. I kind of get a hankering for it's simplicity sometimes. We still have ours, but no one wants to play it,

I do think it's a bit hard to teach. It seems like it should be really simple but there are actually a lot of rules. Some of the cards have a lot of text on them that can overwhelm a new player.

Shellhead replied the topic: #298985 28 Jun 2019 11:32
I have never played the FFG version of Wiz-War. I downloaded and printed some PnP files from BGG in 2007 and made my own set. It hasn't hit the table a lot over the years, because it's harder to get a PnP game on the table then a game with professional production quality components. But every game that we played was fun, even the time when we played a six-player game that ran nearly 3 hours. I keep forgetting that I have this game, because I store the components in a box swiped from an rpg in my collection. Will bring Wiz-War to the the monthly hipster boardgame meetup in July or August.

Michael Barnes replied the topic: #298986 28 Jun 2019 11:35
Yes I still play and yes I miss my old copy with the one color boards, crappy parchment cards, and ugly Foglio illustrations. It was quaint and charming in a way that games rarely ate anymore.

The FFG Edition is fine, complete, and has some decent revisions. But it’s somehow lacking because it’s not cheap and crude. It’s like an HD remaster of a low budget film- it loses the grit and grain that made it unique.

Such a volatile game...I’ve had sessions where I was ready to burn the game in a fire and then others that were incredible.

Saul Goodman replied the topic: #298989 28 Jun 2019 11:49
When I played the older version of Wiz War at age 11 I had a blast. I've since played FFG's version quite a bit and have had some great times with it. I agree though that it can be frustrating to play - there often seem to be a lot of misinterpreting cards.
An amazing game when it's at it's best. Really frustrating at it's worst.

"Masterpiece" is a good word for it. It's the game that brought me back into gaming after a long time away.

This thread does remind me that we haven't seen Colorcrayons around in a while. Another victim of site drama, I guess.

And I find it easy enough to teach. We just throw in new players. Sometimes they're hesitant to play cards but they usually get into it by the end of the game. Then you have to play again.

It's epic, and randy, and absurd, and shaking up a can of beer and cracking it open beside the face of a sleeping toddler.

The only thing I can complain about Wiz-War is FFG's stupid decision to stop short with their expansions. God damn did I want that sixth board, sixth Wizard, and a few more monster minis. Stag! Stag! Stag!

Vysetron replied the topic: #299005 28 Jun 2019 14:46
A classic for a reason, though admittedly I'm basing that off of one play from a while ago. Such a blast. When this game inevitably comes back into print I'll seriously consider nabbing it. Then again, do I really need it when I have Zimby Mojo?

Vysetron wrote: Then again, do I really need it when I have Zimby Mojo?

I think there are similarities, but they still vary quite a bit. The pacing is completely different as Wiz-War is fast and brutal while Zimby Mojo is more strategic and lengthy.

mc replied the topic: #299010 28 Jun 2019 17:42
Picking up on other points
- I love it. My kids love it especially.
- it just creates those funny, memorable situationss like almost nothing else
- teaching is fine for me, like quozl said, just drop someone in, and then it doesn't last that long anyway, it's fine.
- yes it creates arguments and THAT IS PART OF THE FUN. "I'll never forget" the furious argument I had with my 6 year old son about whether he could astrally project through a wall into the next board, use another spell to grab the treasure out of my hands, and retain it when he finished projecting so he could drop it in his own square and win. I was always going to let him win, because, nice move, but ARGUING ABOUT FICTIONAL ASTRO PHYSICS is part of it.
-house rules galore then.

san il defanso replied the topic: #299014 28 Jun 2019 19:41
Aside from maybe Talisman, there aren't many games I can see 10-year-old Nate enjoying up through junior high, high school, college, young adult years, and now creeping into middle age. But Wiz-War is definitely there. It's the sort of game I have always assumed SHOULD exist, even when I didn't know about it.

I definitely see the appeal of an old set. It's the sort of game that might actually benefit from fewer attempts to clarity rules, rather than FFG's constant attempt to make sense out of nonsense like they have done with so many games from this time period.

But their version is still very nice. Shoot, my box has painted minis and everything. I trot it out quite a bit.

- Done the famous lightning bolt through a wall to take an opponent from full health to zero in one shot.
- Been killed with a Powerthrust by a Big Man (innuendo, FTW!)
- Had four totems running in my sector that no one would enter for the rest of the game.
- Trapped someone in a closet behind a Stone Block too many times to count.
- Had 5 different magic stones in my hands until someone Fire Darted me from Around the Corner.
- Etc.
- Etc.

Yes, I remember the Thumb of God and I'm also disappointed that FFG didn't continue with expansions. The Big Book of Spells should be even larger. Except shield spells. Fuck that noise. More blood!

san il defanso replied the topic: #299021 29 Jun 2019 04:07
My favorite death was the time someone played a card that let them control my wizard, and then they dragged me over a rose bush over and over until I died

Surprisingly, given that I'm an old-time gamer, the FFG edition was the first I ever played. That may be why I'm actually on board with a lot of their changes - particularly like the spell schools over One Big Deck.

I soured on it a couple of years ago through no fault of the game itself. I played it a couple of times with my daughter who loved it, partly because it's so silly and partly because she won both, purely out of luck. So she became convinced that she was brilliant at it and I had to keep on throwing game after game to keep her happy - she wasn't old enough to deal with the fallout at the time.

Hopefully, I'll pick it up again with some adults sometime. But. Too many games.