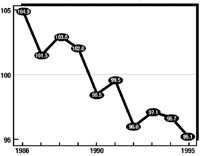 A short while ago, over on Boardgamegeek, I made a bold and public statement to the effect that current trends in Euro game design were bad for the hobby as a whole. Another user, Pedro Silva (Mallgur) called me out on this, and asked me to explain what on earth I meant. I couldn’t give him a succinct answer to this question: in truth, what I’d phrased as a bold and definitive statement was in fact little more than a collection of vaguely associated ideas in my mind. But I was pretty sure there was a coherent argument there somewhere, so I said to him that I’d respond by putting my thoughts together into a column. So here it is - this is my response.

The train of thought that lead me toward making that statement started a long time ago, when it occurred to me that two of the common defining features of Eurogames - the short rules and play time - had actually become design goals in themselves. I don’t see how anyone could possibly argue that keeping play time and rules length down to the minimum is a bad goal - the big question is what does one define as “the minimum”. Is it the minimum to convey a particular theme? The minimum to reach a certain number of meaningful decisions during play? The minimum to pass muster as an acceptable simulation of the Battle of the Bulge? Which minimum you pick is irrelevant to this argument: what’s important is that you have some sort of minimum, some sort of goal by which you define the success of your game. The trouble starts when something like “must play within 60 minutes” becomes a minimum in itself as that’s a sure-fire way to create a game with a short shelf life, because it exists to do nothing more than entertain the players for an hour. It has no other raison d’être. If that’s all it needs to do then it isn’t likely to be a game which has much depth or replay value. If you ruthlessly strip a game back to its bare essentials, you’re going to be left with something which is quite obviously some sort of logic puzzle. And it’s an unfortunate fact that logic puzzles often have a solution - once you’ve got it, the puzzle ceases to have value. This is what seemed to be happening with more and more Eurogames.

At the time I formulated this opinion, it looked to me that the market was being flooded with gluts of games that people were buying, playing maybe once or twice and then forgetting and moving on to the next shiny exciting thing. Whatever happened to Yspahan or Santiago or Reef Encounter or Ticket to Ride XIIIIXX: Revenge of the Mutant Steam Boilers? All (well, mostly) games that got raved about at one time or another, and were indeed solid enough designs, only to drop into the mists of relative obscurity in a vanishingly small space of time. Often, it seemed because they’d been slimmed, reduced and playtested to the point where there was relatively little left to engage the attentions of gamers over more than a handful of plays.

This was the basis of the nefarious and unfortunate “cult of the new”. And it was being aided and abetted by the hype-mongers of the internet who’d scream “OMG, best thing since Chess!!” after a couple of plays only to quietly drop it like a stone another couple of plays later and move on the next shiny thing.

I can’t see how anyone could possibly defend this process as being good for the hobby. We, the consumers, were being buried under avalanches of rubbish in which it was becoming increasingly difficult to pick out the gems. As a result, publishers felt emboldened to keep on offering us rubbish because we kept buying it, and designers no longer felt the need to innovate or to produce genuinely exciting games because they knew that a game knocked up over a couple of months would still find a publisher and enough of an audience to pay their bills. Whatever happened to the early German games like Settlers or Ra or Bohnanza which were relatively simple and quick but which also had immense replay value and clearly had some sort of point to their existence other than turning a quick buck?

But I’m hardly alone in having that particular opinion, or in taking the time to point out to people the problems engendered by that approach. What really alarmed me, and lead me to making the blanket statement about current trends in design being bad, was the realisation that nearly all of the highest ranked games of recent years were efficiency engine games. If you look at the BGG top ten then I would characterise at least six of them as quite clearly being efficiency optimisation games. There are heavy overtones of the efficiency engine in two of the others. It looked rather as though the success of Puerto Rico had forced all the Euro designers to live in its shadow and churn out clones in order to please the taste makers over at BGG. So I reached the conclusion that the way in which designers were moving gaming was ruthlessly toward the efficiency engine model, the style of game that I dislike the most, to the exclusion of all else.

See, when Pedro called me out and demanded that I defend my opinion, I obviously had to sit down and think about it. And the more I thought about it the more that I realised that my argument was built on some fairly shaky foundations. What first struck me was that in recent years, alongside the meteoric rise of massively hyped efficiency engine games such as Agricola and Dominion there had been an increasing number of other Euro designers who’d been moving away from the efficiency model that had made Puerto Rico so popular, and who had been creating and employing a variety of clever mechanics in doing so. What’s more many of these games, such as Imperial and Shogun, had been very highly lauded and achieved a lot of success on the back of very little hype at all, even if they didn’t actually end up making the holy grail of the BGG top ten.

On further consideration I was also struck by the fact that a lot of the most popular Euro titles actually break their own definitions. Neither Agricola nor Puerto Rico nor Caylus are particularly simple, partly because they require players to internalise the effects of a variety of different resources and buildings. The former two games, whilst almost wholly skills based, depend on random elements to seed the differentials which give them replay value. Nor, I should add, are any of them all that quick, with most requiring 90-120 minutes to play. So could I really make a circular argument about the demand for shorter, simpler, logic-driven games ruining the hobby as a whole, when it seemed like the most successful games were actually turning away from this model, and utilising more concepts and random elements to add replayability and depth to the game? No.

I still think that the whole speed and simplicity thing, and the “cult of the new” concept are overly prevalent and bad for gaming as a whole. But on examination two things stand out. Firstly, my claim about current trends in design being detrimental to the hobby is patently false. In actual fact it looks a whole lot like things are moving in the other direction - after a few years dominated by the “short and simple” mantra, many designers are breaking out of the mould and making longer, more complex and more random games and whilst there’s still a lot of optimisation games around, a significant number of authors are using this break with the past to move design in new and interesting directions. So I’m glad that I decided to answer Pedro’s question in a column - I made my original statement in a public place from which the limelight has now moved. So it seems right that I should make my retraction in an equally public place where plenty of people can see it. Pedro: I was wrong.

There was, as I said, a second opinion that came out of all the considering I’d been doing. Like I said, the cult of the new is still with us, and even if things are shifting somewhat it’s still damaging and potentially dangerous. What I said about the uniformity of the top ten on BGG is also still true. There is a problem here. What I’d got wrong was the source.

The source is that there is a single, overriding source of opinions about gaming on the internet: BGG. It’s not the fault of anyone at BGG that it got to be that way, indeed given the status of our hobby as a minor aspect of a minority pursuit it was perhaps inevitable. But I can’t help but to think that it has got to the point where it’s becoming damaging. The reason the top ten is so uniform is because the bulk of people on BGG who rate games (which isn’t necessarily the same as the bulk of users overall) are fans of that style of game. The reason so many other games are starting to look like clones of each other is because they’re playtested with this same audience in mind and, perhaps worse, playtested to the point of destruction where anything which might be seen as being imbalancing or offensive or illogical or indeed interesting is ruthlessly trimmed. And this sort of playtesting goes on because designers and publishers know that if they annoy a single vocal BGG user that user will be able to damn their game with a single post, since so many gamers interested in the title will check the entry on BGG. The reason the cult of the new continues to perpetuate itself is because a few self-proclaimed tastemakers on one site have the ear of the significant majority of the gaming world.

So if it’s not the fault of BGG, whose fault is it? It’s mine. Or, to be less egocentric it’s the fault of every gamer who writes about gaming outside the confines of BGG. We need those people to be good writers and to some extent able self-publicists so that gamers of all stripes will go to Hardcore Ludography, visit Consim World and of course read columns on here on F:AT and on BGN. We want more mixing and meeting of minds and more meaningful discussions from people who are exposed to a range of different ideas and opinions about gaming. I was wrong about the direction we’re going in: what I’m asking for has already started to happen. But the speed with which it happens, and indeed whether or not this sort of cross-pollination moves us forward or gets strangled at birth, is up to us.

This is a copy of an article posted on http://www.boardgamenews.com/. The audience over on that site will be contributing a discussion thread of their own which I imagine will head in very different directions to this one. In the interests of diversity, please head on over there, read the comments and if you have something to say, add it to the debate!