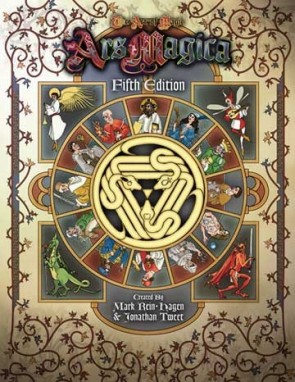 Game Name
Ars Magica
Designer
There Will Be Games

Time is something the medieval mages of Ars Magica have in plenty. They have no need of wealth or work. A specialist class of peasantry, called Grogs, cater for their basic needs. Their magic can bend time and potions extend their lifespans to hundreds of years. Ironic, then, that Ars Magica is one of the most time-consuming role-playing games around. It also happens to be one of the best.

Originally published in 1987, over time ideas from Ars made their way into countless other games. Its house system, whereby Magi belong to specialist groups, was the precursor to the clans and factions of the White Wolf storytelling games. Its concept of troupe play, where the participants take on different characters and roles, is applicable to many systems. It was an early adopter of d10 based mechanics. But what keeps Ars special, even after all that time, is that all of its innovations support each other, building toward something unique.

Take the setting. It's real history, except everything that people believed in the middle ages is true. There is god and there is Satan and the world is full of devils trying to tempt people into sin. There are faeries in the hedgerows and wild places, partaking in otherworldly revels far from mortal eyes. And there are, of course, real wizards who can cast real spells. It's a setting every bit as fantastic as the wildest plane of D&D, but which needs no introduction. The players all learned it in high school.

Within the setting, Magi live in groups called covenants. The covenant is such an important part of the game that it has its own character sheet. They do not live alone: Grogs live with them as do companions, notable outcasts from medieval society. Oath-breaking knights, female priests or cursed warriors might make good companions.

Players all have a wizard character and a companion character and they might also have a Grog or two. The rules make no attempt at supporting fake power differentials. An apprentice mage could nullify most everyday threats with a flick of their fingers. Companions are more skilled and better equipped than Grogs. Why, your traditional role-player might ask, does everyone not spend all their time playing their powerful mage?

The answer is the game itself.  Its goal is to tell the entire story of the covenant and its inhabitants over the span of time, of years, even decades. One player will run an adventure and the others will pick one of their characters to take on it. Their other characters can do other things. A wizard could study, brew potions, go out collecting the raw material for magic items. A companion could train, study, chase up investments to increase their wealth.

So no matter whether they're active in an adventure or not, everyone's character is busy. They are gaining experience and weaving a tiny thread into the story. This removes much of the impetuous to take your "best" character adventuring. Indeed wizards who stay at home to study a lot often end up more powerful than those who directly involve themselves in more mundane affairs.

It also means the person running the adventure can have a character, and have that character do stuff while they GM. It doesn't matter if they run one adventure or ten or the whole campaign. The option is there for them to step away if they want and someone else wants to take the reins. The game calls this troupe play, and it comes hard to people raised on other games. It feels as awkward and unnatural as, well, finding a wizard in the middle of a medieval village.

But with time, its advantages blossom. Being a GM feels less of a burden. Anyone who wants to have a go can do so, even if it's only for one adventure. It removes the slightly adversarial feel many games have in favour of co-operation. The game isn't about power, it's about the whole group telling an epic story together. Everyone gets a say in that story and the sagas that unfold over time are the most extraordinary I've experienced in role-playing.

We're halfway through the review, and we've not mentioned magic yet and that's the other half of what makes the game outstanding. No other game has ever quite replicated the breadth of Ars Magica's magic rules. It posits fifteen arts, divided into five verbs like Create or Transform and ten nouns such as Plant, Fire and Mind. To cast a spell, you just put two together: Control Water, maybe or Destroy Magic. The actual art names in the game are all in Latin, the lingua franca used by wizards in Ars. But the effects are clear: between them, the arts let players invent almost any spell they can conceive.

With great power, though, comes great responsibility. More powerful spells ought to be harder to cast, and this is often tough to judge. There are guidelines, but the system is so flexible and so unfamiliar that this is unknown territory. It takes time and practice to make the right calls. It is also open to abuse in the hands of unscrupulous players. This fifth edition has ironed out many problems, but it's impossible to get them all while retaining what makes the system so special. The most famous example is the "pink dot" rules loophole that lets a wizard use an easy spell to make themselves immune to any mundane attack.

These issues highlight the issues with Ars Magica as a whole. Although not complex, making it work for the group as a whole is hard. Everyone has to want the same things from their game experience. Everyone has to participate in the troupe, in the story. There's motivation aplenty because when it works, it is beyond wonderful. But when it doesn't, there's no fantasy stereotypes or Monty Haul rewards to fall back on and help patch over the holes. You're on your own, and only time and effort will make it work.

Time is something the magi have, but as a middle-aged father of two, I do not. Instead, I dream about my magus brewing a longevity potion as my real life speeds towards its inevitable dotage. The lure of role-playing is letting us waste reality in fantasies of power and prestige. With its potent wizards, Ars Magica dangles better bait than most, but makes more demands to get there. And if you're going to waste time, you might as well take time to do it well, and make time for Ars Magica.

Mr. White replied the topic: #254394 18 Sep 2017 07:58
I like the idea of the GM also having a more active role and not just running NPCs. I've long considered getting an rpg to play with the kids and being able to play with them as mentioned is enticing. The setting sounds cool and playing out the lineage of characters reminds me of what I've heard about Pendragon (another supposedly great RPG, I've never played).

I'm not sure we're here yet. I think we're still at the Talisman/Pokemon Master Trainer level and any first stop into full on role-playing still sounds like it'll be with that Lone Wolf Adventure game.

I have been thinking frequently of all the role-playing I did in the 80s and 90s and I would no doubt jump into an Ars Magica game this instant if I knew someone running it.

Gary Sax replied the topic: #254480 19 Sep 2017 12:46
I always wondered where a lot of ideas from Mage: the Ascension came from since they seemed pretty different from the other World of Darkness systems. Now I know! WoD guy worked on this!

Shellhead replied the topic: #254487 19 Sep 2017 14:03
I was recently pondering my next rpg campaign and thinking about the troupe style of play from Ars Magica.

Ars Magica always seemed like the Velvet Underground of rpgs. I have role-played with a lot of people over the years, but don't know anybody who ever played Ars Magica. And yet it seems very influential with rpg game designers.

Nodens replied the topic: #254495 19 Sep 2017 15:11
Great review of a unique system. I played Ars Magica for a little while in the 90s. The system is still among my favourites, but it does require a lot of commitment from everyone. Just the way the players decide which one of their characters they send on a new quest was worth it to me: "I'll play Brutus the Butcher, my Magus needs to do more research on demonology and I feel like hitting things tonight."
I don't remember if it's in the original rules, but the Grogs could be played by any player and that resulted in some very interesting and fleshed-out characters while sometimes feeling like giving a friends' ferrari a spin.

Ars is a fantastic game in scope and vision. I've never played it but I came close. Too many games, too little time. As previously mentioned, it requires a group that is 100% committed.

Time is something the magi have, but as a middle-aged father of two, I do not. Instead, I dream about my magus brewing a longevity potion as my real life speeds towards its inevitable dotage.

I enjoyed this sentence.
Read More...