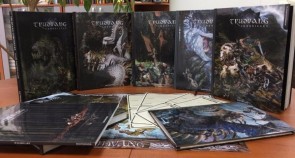 It was a bitter journey home, the wind finding seams in coats and gloves, ice frosting on cars and windows. When I reached the sanctuary of the porch I found, as well as a welcome glow of warmth, a package. Books, from a land much colder and windier than mine.

I opened them, stamping in the hallway, my kids crowding round to see what they were. "Turd ... wang?", one of them attempted, brow creased by the typography. I tried not to laugh and showed them how to read the font: Trudvang.

My interest in this game stemmed from a simple source: the artwork looked incredible. I flipped through the player's book for a sample to show them, remembering just in time that I had no idea what most of the pictures were. Good job too, as the first painting I hit was full of gratuitous female nudity. It feels like a personal let down: a little betrayal. Dismayed, I go looking for more. This time the book doesn't disappoint.

It falls open on an extraordinary image of three Viking-like warriors walking before two trolls, or maybe giants. Their blue skins, blunt noses and curling tusks are at once familiar and fantastic. The scrunched expression on the nearest face inscrutable, while the others look off-page to something we cannot see. Mist curls at their feet, rising to a wash of blue in the background. It reeks of adventure, a hundred unknown interpretations gathering beyond it, evoking a lost world that never was.

Later I curl up in bed, the duvet a guard against the moaning winds outside, and dip in and out of the books. They're hard to make sense of, but the snippets that flash through are exhilarating. I learn that the creatures in the picture are Hrim Trolls, and that as they age the weight of those growing tusks bends them onto all fours. There is a freakish pencil drawing of this state, both bestial and human. I want to put my fingers through the page to feels its muzzle.

I sleep, and dream the terror of standing before it in a broken ice-field, while the wind whips snow off the sharp ridges and ruffles its hair.

Next evening, I try to read it properly and frustration creeps in. The text is clearly a translation and, while comprehensible, they read oddly. The authors have scattered information through the chapters like gems cast across mud. In the player's handbook, I learn that the Elves once dwelt with their gods, until those deities mysteriously vanished into the stars. In the world chapter of the game master's guide I find they live on a huge island, and in the weapon chapter that they fight with spear-swords of hardened wood. In the bestiary, I discover that they once fought a war with dragons.

It's confusing, difficult. I want all this information in one place. There are echoes of traditional fantasy here, and of Tolkien. But that's okay. These elves are both like and unlike the elves of Middle-Earth, as are the dwarves and humans. I remember in an old edition of Forgotten Realms having to learn that my character should say "Axes high, friend" when parting. The idea was to make it feel like a fantasy world, but it just felt silly. Trudvang doesn't need such fripperies for players to feel at home and in an alien place.

That night, when I sleep, I dream of a jigsaw puzzle. It's beautiful: a weak sun smeared across a tundra sky, as trees before it bend under the weight of snow. There are pieces missing, but I imagine yet more beauty in the gaps where they should fit.

Learning a new role-playing system, one of the first things I always do is make a character. So I do: a human ranger. He is a Stormlander, a proud barbarian culture that reminds me of Glorantha's Sartar tribes. This template gives him two skills and a language. I flip through the pages, looking for more, but there's little. A bunch of points to spend on stats and other skills: a cold wind of freedom and imagination. My ranger can be whatever I want him to be.

I close my eyes and see him, seated on a low stool before a sputtering fire in a long, wooden hall. The smoke stings his eyes, as something awful howls in the snow-blind night outside.

Before moving on, I linger over the spells at the back of the book, with names like King's Anthem and Blood of the Lindwurm. Priests - called Dimwalkers - are proper priests in Trudvang. To gain much magic they must pray and sacrifice things. Things like time, treasure or even blood depending on the god. Some of that good old-time religion, right there.

We gather a motley party and play. There is a brutish troll-dwarf warrior from a secretive society in a mountain heart. A taciturn priest from the Viking-like human culture of Mittland, whose gods demand the fulfilment of oaths in exchange for power. A flighty bard, acrobat and assassin from the civilized, monotheistic land of Virann.

I take this rag-bag crew into the enchanted forest of Wildheart, in a published, translated adventure. The spiel on the back claims it as "one of the best adventures of all time", which we doubt. But, like everything else in Trudvang, it's packed with imaginative peculiarities. Trolls with cow's tails and ice-caves of the restless dead. Trying to keep light on spoilers, it's non-linear and likely to tell an entirely different story on any two playthroughs.

Early in the adventure, we end up having a fight with the combat rules. In contrast to the fine character building, they're complex and procedural. We pause play while we procure miniatures. This helps, but only a little. Worst are the initiative rules: every action has a modifier, because swinging a great-axe is slower than running away. But rules-as-written allow you to change your action mid-combat. After all, if the frost giant you're facing kills your wizard early in the round, you might prefer to run away than swing your great axe. Trying to implement this is a tedious, unholy mess, so we agree a house rule. No changing actions.

Rather more popular is the concept of "combat actions". Everyone has a pool of points they can spend on different things like attacking and parrying. They have different costs, depending on the weapon. A dagger, for example, can attack more times than that great-axe. Combined with the miniatures, it gives combat the feel of a tactical puzzle. There is disagreement as to whether this is a desirable thing in the middle of a role-playing session.

Shortly after, the party discovers that there's a good reason why the combat is so convoluted. The module strongly suggests that Trudvang shouldn't be a game about fighting. The encounters in the forest are memorably imaginative, although I have to work hard to fill the blanks with colour. I don't always succeed. But the direction is clear: in most cases, there are better ways to solve a problem than swinging swords or slinging spells.

The party, conditioned by long years of D&D, don't learn this. Still no spoilers, but the module does not end well for them. They meet a grisly fate at the hands of a grisly undead creature that feels specifically designed to teach murder-happy players a lesson.

I can't sleep that night, pumped up by the excitement of the game. When I do doze, I dream of the forest with its dark trunks pressed close together and a chill wind whispering among the needles. I dream we're playing the setting but with D&D rules.

Next day, I turn over in my mind how awkward it would be to convert, seeing as how the flavour is bound up with the rules. Trudvang is all about the imagination to make something familiar, yet different. As gamers, if we want something different, perhaps we need to have the imagination to move beyond the familiar.