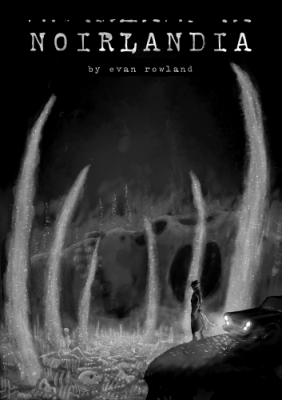 "Forget it, Sunny, it's San Nabisco."

So ended our tale of organized crime, crooked government agents, familial backstabbing, and a land deal gone bad. Sound familiar? Don't accuse us of plagiarism just yet. Our version also involved overreaching seed companies, mutated plant people, and a disease that turns its victims into a clone of whoever they contracted it from. But squint through the fluff and you'll see a very old and simple story indeed: someone's been murdered, and we need to find out whodunit. The fun, as always, is in figuring out the details.

Noirlandia is a role-playing game for 3-4 players that seeks to recreate both the stylized gloom and narrative complexity of hard-boiled detective fiction and film noir. It's designed to be played in a single session and run without a game master. I find this zero-prep, democratic approach to role-playing to be immensely appealing, though this often means that, without a single person arbitrating and guiding a session, more weight gets put on the game's mechanics. The question is, can Noirlandia triumph under this kind of pressure? Or will it fold like a cheap card table, buckling under the stress? The answer, as it often is in the game's source material, is complicated. Let's dig into the case and see what we unearth.

You begin a session of Noirlandia asking big questions. The game doesn't come with a stock setting, but instead asks the players to collaboratively build a bespoke city by inquiring about specifics. For example: what makes the citizens of this city different? What kind of laws do they live by? This attention to detail continues as the players zoom in to further define the districts that comprise the city. The end result of this process is a setting that feels three-dimensional and lived in, no matter how fantastical its particulars might be. It reinforces the very noir link between the drama of the characters and the corruption of their environment.

After you create a city, the game proceeds to character creation, which happens en masse by drawing a number of standard playing cards and rolling some six-sided dice. The number and suit of a card, along with number of a rolled die, will give the outlines of a character: their archetype (aristocrat, private eye, government official, etc.), the district where they operate, and their primary guiding principle. The players fill in smaller details, pencil in a few attributes, and create a handful of relationships, and then the game is ready to begin. There will always be one more character than the number of players; this final character is the victim whose murder the players will try to solve. The entire process is quick, simple, and evocative.

The meat of the game is the investigation phase, where players take turns creating scenes and unraveling the shared mystery. The heart of Noirlandia resides in its most innovative element, which is the use of a corkboard to track your investigation. As you dig deeper into the case and learn more about the circumstances surrounding the victim's grisly demise, you'll unearth new leads, which are generated by drawing a card from the deck and interpreting the results. For example, you may draw a card that is associated (via a chart in the book) with a chemical from the downtown district. Perhaps it was the murder weapon? The active player gets to scrawl down a note (ex. "our victim was poisoned!") and pin it up on the board as a lead.

Later on, a character might have the opportunity to build a connection between leads. This is done by attaching a piece of string between the two pieces of paper on the board. For example, maybe a character discovers a link between the poison used to murder the victim and the shady insurance adjuster another character met earlier. String them together, and eureka! The plot thickens. The goal of the game is to find answers for the three major questions (who? how? why?), each of which requires three connected leads to answer. If you find these answers before the city goes to hell, it's case closed. Otherwise, the characters will be forever haunted by the unsolved murder. Either way, they'll likely be scarred by the things they did and the rules they broke along the way.

For any armchair detective who's ever watched a police procedural, this is a dream come true. Pinning new leads on the board and creating a web of conspiracy is incredibly fun and immersive. It also addresses one of the main challenges with detective-themed tabletop games: how to handle a mystery. Often this is done by turning the game into a dry elimination puzzle a la Clue, while other times it's resolved by adding up some kind of points to determine a perpetrator, which feels equally unsatisfying. Noirlandia puts the onus of storytelling on the players, but it gives you constraints that put useful limits on your imagination and help create the feeling of surprise you get from reading a mystery novel. Sometimes this deductive process requires you to contort your sense of logic in wild ways ("uh, the parrot is obviously connected to the janitor, because... the janitor's been having an affair with the ornithologist!"), but I was astonished at how coherent our particular story was after we finished.

But, as any rookie gumshoe worth his salt can tell you, the devil is in the details. The heady mixture of mechanical rigidity and directed imagination that powers the investigation as a whole is less effective in the individual roleplaying scenes, which can feel simultaneously over- and under-regulated. The players have tremendous freedom to create their scenes, as long as the scene contains some action that's challenging or dangerous. For my group, which is accustomed to more structured games, this hands-off approach to scene building left players feeling a little aimless. While we had an easy time tracking the progress of the overall investigation, we had a harder time figuring out what the characters should do to push it forward.

It doesn't help that the dice resolution mechanic built into these scenes is a little overcomplicated. Once you get the narrative wheels turning in a scene, you have to break your momentum to build some dice pools, make two separate rolls with similar (but slightly different) rules, and engage in a gamey dice manipulation mechanic that doesn't feel well-suited for a game with this kind of focus on story. I wish some of the granular detail that went into this part of the game was instead channeled into a narratively-focused system that helped players build interesting scenes rather than interrupt them.

Despite these misgivings, I wouldn't hesitate to bring Noirlandia out for a pick-up roleplaying session, especially if I was with folks who had the storytelling ability or experience to thrive in a more free-form system. There's no other game I can think of that better replicates the noir genre, or that better understands the joy of piecing together a mystery one clue at a time. "You've got a nasty reputation, Noirlandia. I like that."

The problem I’ve often found with story-driven RPGs is that, in order to trust the players completely with self-directed storytelling, the game would have to be less of a tabletop game and more of a get-up-and-dance theater exercise.

I agree that so many of these games create a strange space halfway between gaming and improv. I think the ones that are most successful are the ones (like Apocalypse World) with clear and defined actions for everyone participating in the game. I'm more and more interested in the constraints a role-playing game puts on its players for the purposes of narrative--the more specific and the less open a game is, the better chance it has of shepherding players to that elusive space where they are creating more interesting stories than they would have been capable of in a totally free-form environment, essentially punching above their narrative class.