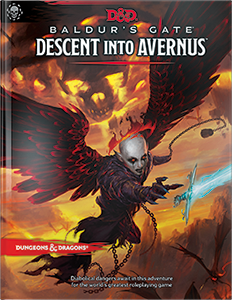 Going down, party time
My friends are gonna be there too

As a longtime D&D player (since 1983), I grew up playing the game during the height of the Satanic Panic. I vividly remember one of my friends throwing away all of his books, dice, and miniatures because his youth pastor told him it was devil worship. The Fiend Folio was spoken of in hushed whispers, almost like you could accidentally summon Asmodeus if you rolled badly. Indeed, some of my fondest memories of playing D&D as a kid are flavored by this taboo sense that what we were doing was somehow “occult”. So when the new Dungeons & Dragons book, Baldur's Gate: Descent into Avernus, was announced and it was all about devils, demons, and Hell I was thrilled. Throwing up the horns with King Diamond blasting, I was ready for this book

And it couldn’t have come at a better time. Just a couple of weeks before release, I stupidly put my main group into a no-win situation whereby their failure to prevent an avatar of Juiblex from expanding out of control found them wandering a reddish hellscape that I pretty much cribbed directly from the end of the most excellent filmMandy. I really had no game plan beyond that. Descent to Avernus gave me exactly what I needed to move our campaign forward and then some, and the next session they were tearing across the plains of Avernus in an Infernal War Machine and fighting their way through an encounter that was pretty much 100% a homage to the Road Warrior. Except with devils instead of mohawked punks in discarded sports gear.

Much of the press around Descent into Avernus has made mention of the heavy Mad Max influence on its hell-bound storyline and setting and for those of you who want to take advantage of this surprisingly great idea will be delighted to find simple rules and options for magitech vehicular mayhem. But these soul coin-powered bikes, buggies, and tanks are just a small facet of the expansive content on offer here. There’s a full campaign that starts out in the legendary city Baldur’s Gate that will take a first level party into Avernus for some fairly well-written intrigue, mystery, and action. Players will find themselves mired in the fabled Blood War, a never-ending conflict between the more orderly and lawful devils and the chaotic demons. I really like this aspect of the D&D lore so I particularly enjoyed the expansion of details, monsters, and story elements that were explored in the excellent Mordenkainen’s Tome of Foes.

This is a high stakes campaign that might feel somewhat intimidating to new players coming over from Phandalin. But more experienced players will appreciate the big-picture storytelling here and the opportunities to get tangled up in a huge conflict involving extremely powerful characters and entities. I’ve not played the campaign as written, but I’ve used quite a few elements from it in my primary game. My party has had run-ins with some of the characters including Bitterbreath and Mad Maggie, and I especially liked the section on the various raiders causing mayhem around Avernus so I found that to be a useful resource. Any campaign that is headed for Avernus or that will involve devils or demons will find this book, along with the Tome of Foes, to be indispensable.

There is also a major section detailing Baldur’s Gate in all of its scummy glory so players looking to get back to Candlekeep or run with Minsc and Boo like it’s 1998 all over again will be delighted. My primary party is based out of Phandalin and now I’m thinking about how I can get them relocated to Baldur’s Gate so we can use some of this stuff. It’s not dissimilar to the kind of material found in the Sword Coast Adventurer’s Guide, which may make it especially useful for those looking to embark on a more urban storyline.

It goes without saying that this is a top-shelf book, as virtually all of the 5E books have been. Illustrations and quality are best-in-class across the board, and the writing from Chris Perkins and his team is uniformly very good to great. It’s really quite a bit lighter in tone and more whimsical than you might expect – there’s a full menu written in Infernal in the back and Joe Mangienello has a sort of guest starring role as his Arkhan the Cruel character, but it still isn’t quite as goofy as Tomb of Annihilation could be.  Be aware that this may not be the best startup campaign, as mentioned, and I think some players may actually chafe at the Mad Max elements. It feels quite a bit different, almost like a new setting as divergent from Faerun as Dark Sun or Eberron is, and the post-apocalyptic shenanigans push it away from the high fantasy D&D standard while remaining entrenched in canonical lore. All that makes this book rather less essential, unless the story and setting are appealing to you and your group.

I’ve really enjoyed the other Descent into Avernus products that have released alongside the book as well. The dice set is fun – it’s certainly not a critical purchase, but it’s a decent set of polyhedrals with a box that serves as two dice trays (which always add a touch of class to any die roll) and some cute ephemera. The Icons of the Realms miniatures have been for the most part excellent, with some good sculpts of the various demons and devils and the paint jobs are decent. I still don’t have a Zariel, but there’s an unpainted one out from Gale Force 9 I’ll pick up if and when she makes an appearance in my game. As for the Wizkids Infernal War Machine premium- sadly, it’s kind of awful. It looks cool at first, but its functionality is extremely limited and it doesn’t really match up with any of the vehicles in the book. I actually returned it after buying it as it did not match up at all with the vehicle I wanted to put my players in. There is a “cockpit” area where you can put two miniatures but it has no detail at all and a large cargo area that will fit 6-7 figures. There are no external weapons on it. DMs or players that are into Gaslands would do better to just Gaslands up something custom or just draw the vehicle plan on a grid.

Regardless, the Descent into Avernus release is solid. My players and I have had a lot of fun with it and I’m sort of sad to be leaving it behind as we move on to further adventures back in Faerun. But who knows- they’ve signed a couple of ill-advised contracts during their time here so we may be returning at some point due to legal entanglements.

jason10mm replied the topic: #303055 02 Nov 2019 11:55
Excellent write-up. It kinda boggles my mind that we are getting such high value accessories to DnD, these massive intricate props and the like. I'm pretty sure I never ran a game back in the day without having to proxy about 50% of the stuff (or let the minis dictate what monsters were present) but now you can deck out entire tables of stuff just like a minis wargame.

I'm still amazed that 5e hasn't rolled out Dragonlance yet. They keep hitting Forgotten Realms in general and the Sword Coast in particular while digging into TSRs past but DL remains absent. I have my theories given the current direction WOTC is going with the game (heavily emphasizing diversity and player choice instead of a fixed set of PCs tied into a railroad story) but it would still be nice as there were some boss modules for that campaign I'd like to see return.

Michael Barnes replied the topic: #303128 05 Nov 2019 09:30
I’m actually trying to wean one of my groups off of heavy prop/mini presentation. I sort of spoiled them on their first couple of sessions with big setups, but it’s gotten to where the stress on me to provide them each game is too much! For our Avernus adventure, I wound up just drawing the Infernal War Machine they were in for a big Fury Road homage and it worked fine. I’ve nudged them more towards a hybrid of loose tactical and theater of the mind.

Interestingly, the two adventure compilation books (Yawning Portal and Saltmarsh) include references to Dragonlance by way of advisement as to where to set the modules in those settings. But other than that...I don’t know if it’ll ever come back.

Eberron is next, I never played anything there.

Shellhead replied the topic: #303133 05 Nov 2019 10:47
I backed myself into a corner with my last big D&D campaign, Ptolus. I found a website where a talented pro had prepared extensive miniature scale maps for all the adventures and many key locations in the Ptolus campaign. I was working for a company that was slowly going out of business at the time, and printed a copier paper box full of color miniature maps for the campaign, along with token sheets for roughly 1400 monsters and npcs. I mounted the mini token printouts on wooden nickels, which my players quickly accepted as a valid alternative to painted minis. The players loved exploring the maps (which I only revealed gradually, depending on the party light sources and line of sight) so much that the party would sometimes spread out too much, leaving some of them vulnerable to the next encounter.

Since wrapping up that campaign in 2016, I have only run a few one-shot Call of Cthulhu adventures, and I over-prepped for them with copious handouts, miniature scale maps, and tokens. I know Call of Cthulhu works just fine with theatre-of-the-mind DMing, but I feel like my players will now be disappointed if my level of presentation drops too far below the Ptolus standard.

san il defanso replied the topic: #303486 06 Nov 2019 20:51
This one might be a little too dark for my churchy group, but the Baldur's Gate setting is pretty appealing. And the Mad Max influence as well, natch.

I feel like the more I play 5e, the more I appreciate its willingness to function in realms of both detailed tactical settings and theater-of-the-mind. I feel like I've been able to slip easily between the two, depending on the situation, and that might not be the precise intention behind the design, but it's certainly been an upside. Considering how much 5e has tried to please everyone at once, it remains a very versatile system, and I think that's probably why it has had so much success. You can be really precise if that's your bag, but you can just as easily be a lot more loosey-goosey with it. (I am the latter.)
Read More...